Home Columns Get Out & Go George Clinton and P-Funk

Ladies and gentlemen, Parliament Funkadelic is now in session! Well, at least it will be in August, when George Clinton and P-Funk come to Truckee — yes, Truckee!! — for a stop on the funk master’s farewell tour. Tickets are on sale now, so get yours today because this show is bound to sell out.

As a teenager growing up in Plainfield, New Jersey, Clinton formed a doo wop group while working at a local barbershop. They were called none other than The Parliaments, the earliest rendition of what would evolve into the soul-rock-funk powerhouse Parliament Funkadelic.

Now 78, the funk legend is headed to Truckee with the latest edition of Parliament-Funkadelic, which includes his son, daughter, and several of his grandkids. He says he is perplexed at the energy that is still behind the act because even though he’s ready to retire, shows and performances are still on fire.

“It’s weird because everything’s getting so hot,” Clinton said in a press release. “I mean, the shows are selling out. The band is hot. It’s been great having a chance to see what the young kids are doing and how to make that work within the P-Funk band, and we’ve come up with some new things that’s really working … I’m ready to retire, but it’s getting so interesting out here with the people loving all the different things we’re doing. But it’s their turn now.”

The plan is for the P-Funk name to carry on without him, with his family moving the music into the future for younger generations.

“I’ve just got to get them together to make sure they keep going,” Clinton said. “Because they’re not retiring.”

He’s still deciding who he thinks should run things when he comes in off the road.

“I’ve got all my grandkids and my son and daughter in there,” he added. “So I’m trying to figure out, like a reality show, who’s gonna be the one to do that.”

In a recent chat with Rolling Stone, Clinton said he still feels like he did in the ‘50s and ‘60s, when he was just starting out. And just because he’s retiring from performing, it doesn’t mean he’s quitting music altogether.

“I’m gonna keep doing that,” he said. “I’m gonna keep producing and do some cartoons. I’m in that Trolls 2 movie. And then you’ve got Samuel L. Jackson playing me in this movie about Neil Bogart at Casablanca, Spinning Gold.”

Advance tickets are available starting at $60 in person at New Moon Natural Food in both Truckee and Tahoe City, Recycled Records in Reno, and Buttermuffin Smoke Shop in South Lake Tahoe. You can also get them online at ticketweb.com. Ticket prices go up $10 on the day of the show. Seating is general admission. 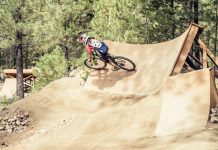