Home Columns My Shot Honor Scotty Lapp by Helping to Build a Skateboard Park in Tahoe... 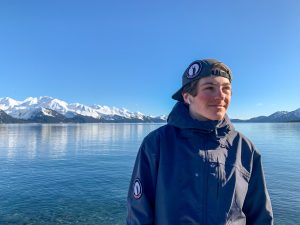 After 16-year-old Scotty Lapp died tragically in a ski accident on Feb. 13, the idea — his idea — of a local skateboard park began to take on momentum. His family, classmates, and ski community made a mission to build a skate park in his honor. We’re appealing to all of you to help us, too.

Scotty’s mom, Amy, has been working with us, a group of his North Tahoe High School friends, to take advantage of the momentum we’re seeing and the donations that have surged in to make the skateboard park a reality.

I speak for all of Scotty’s best friends when I say we agree that Tahoe City needs something for the youth of Tahoe to enjoy. Tahoe City has no place for kids to skate, so the kids have been using the streets and sidewalks as their skate park. We need something that is more local and accessible to everyone as a place to hang out and practice skateboarding. This would be the first infrastructure in Tahoe City with the sole purpose of giving the youth a place to enjoy a sport that is practiced and loved by many local kids. One of Scotty’s many passions was skateboarding, and we always talked about how we need a public skate park close to home rather than in Truckee or Incline Village.

Scotty’s mom, Amy Lapp, agrees and wants to include this information about Scotty here:

“Scotty Lapp moved to Olympic Valley in August of 2021 and attended North Tahoe High School as a sophomore. In the summer and before the snow came, he and his crew (which was a mix of kids his age, older, and younger) loved to skate in Tahoe City. The kids would meet up any chance they got. Since there was no skate park to go to, the whole town became their skate park. For Scotty, skateboarding gave him a sense of belonging, friendship, and community that allowed him to be outside and be athletic in the off-season of skiing. As Scotty was a member of the Palisades Tahoe Big Mountain team, he decided that after ski season was over, he would try to get some local support to build a skate park in Tahoe City.

Unfortunately, that time didn’t come for Scotty. But just hours after his untimely death, the idea came to us that we wanted to build a skate park in his name and to honor his wish. We want to build a place for kids to go, to gather, to practice, to feel welcomed, to have fun, and to just be themselves without fear of having to get yelled at or told to “move on.” We want to provide that special place for all the people of our community. We have support from The Skatepark Project (formerly Tony Hawk Foundation), community leaders, local educators, and the community at-large, but we need as much support and help as we can get. Please join us in making Scotty’s wish a reality. If you would like to support our efforts, there are a few ways to get involved. Send an email to skateforscotty@gmail.com and let us know how you would be willing to help. Also, contributions to the skate park are welcomed at GoFundMe — Scotty Lapp Memorial Skate Park.” ~ Amy Lapp

Within two weeks of his passing, more than $200,000 was raised for this park, showing that it is backed by an overwhelming amount of people who want to see this happen. These donations have come from all over, giving us momentum for Scotty’s dream. To date, there is over $223,000 raised through GoFundMe to construct the skate park.

Creating a skateboard park would be an incredible honor to a local kid who loved this town and this dream. Here are what some of my friends have said about the need for one:

“I believe that there should be a skate park in Tahoe City because Tahoe City is the only place to not have a skate park. Truckee, Incline, and South Lake all have skate parks, and I think the Tahoe City community is left out in that.” ~ Ethan O’Dette Thew

“… because Tahoe City doesn’t like us skating pretty much anywhere, and it would be nice to have somewhere to go without getting in trouble. But most of all it would be a nice tribute to Scotty.”  ~ Sylvain Fritsch

“Tahoe City needs a skate park for so many reasons. One reason is that there are so many people in our town that love to skate, but they have nowhere to go and end up getting in trouble just because they are doing something that they enjoy. People get annoyed and it creates unnecessary issues. A skate park would help our community grow and create a safe and fun place for people to go.”  ~ Izabella Campbell

The Lapp family has appealed to the Tahoe City Public Utility District for its support in getting this project rolling. On March 25, the PUD board unanimously voted to move the project forward. The biggest hurdle is the location. The fundraising continues and we need everyone’s help to keep this momentum. Our community needs to come together to show they care about the youth of North Tahoe.

Scotty’s legacy would be a place of community and inclusion, a healthy place for kids to go for years to come, a place to remember Scotty. Skateboarding is a creative, athletic sport. There is no place to go, and skateboarding on the sidewalks or in parking lots is not welcome. Skateboarding doesn’t require a lift ticket, a pass, or a lot of equipment. Don’t let this pass us by. Let’s make a change for something good and all get involved.

~ Stellan Lane is a 16-year-old sophomore at North Tahoe High School. He was a classmate of Scotty’s, and is also on the Palisades Tahoe Big Mountain comp team. He spends the winters skiing. He plays for Truckee North Tahoe Lacrosse Club and likes to mountain bike and backpack. In the summer he works at River Ranch Lodge & Restaurant and looks for places to skateboard in Tahoe City.