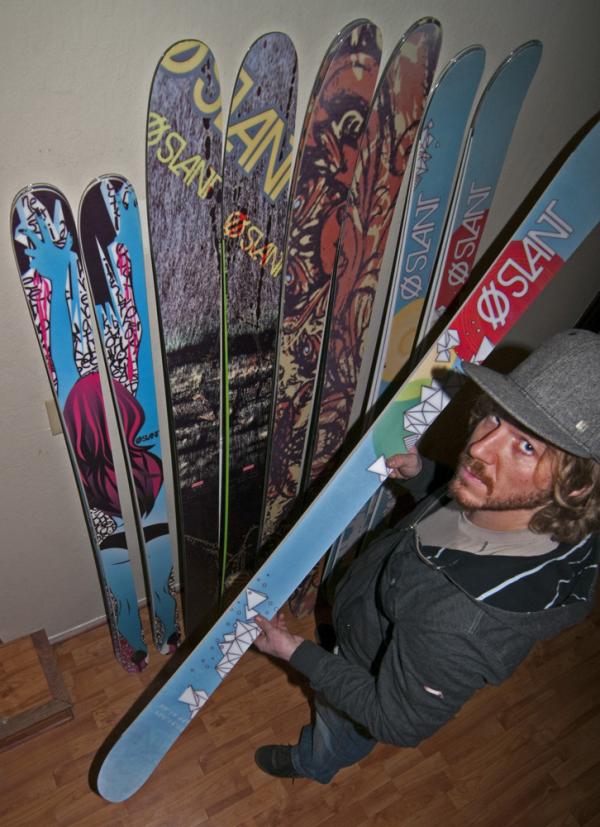 It’s pretty easy to imagine that Santa delivers more skis and snowboards to Tahoe than just about any other community in the world. Multiply the local skiing population by the level of passion and you’ve gotta figure that Saint Nick’s Tahoe-bound sleigh has at least a dozen ski racks bolted on the side.

Donner and Blitzen won’t have to break their backs hauling your skis across the globe if you wish wisely, however. When you’re making your list take a second look at ski and snowboard manufacturers with operations based out of North Tahoe. Established brands like Praxis Skis and Automaton Snowboards are two local options to consider, as are two newcomers to the game — Slant Skis and Jones Snowboards.

Slant Skis was founded in 2007 by 10-year veteran ski tuner Josh Bennett. After a decade repairing skis in the winter and working construction in the summer, Bennett started investigating what it would take to marry the two professions by locally crafting handmade skis. To no surprise, the first thing it took was a serious investment.

‘When I purchased a CNC [computer numerical control] machine in the fall of 2007, it sealed the deal,’ Bennett said. ‘I’m doing this for real.’

Since the big purchase, Bennett spent the next two winters honing his production techniques, researching the best construction materials, and setting up his manufacturing facility in Truckee. He began selling skis to the public last year, producing small batches of five models. This season, the Slant shop is cranking as Bennett and a couple of employees are busily building seven models — four men’s and three women’s. By the time they wrap up production for the winter, Bennett estimates they’ll make about 150 pairs.

Sprang has been helping build his own pro-model skis and noted that the DIY experience working locally with Slant has been amazing.

‘Being able to build the exact ski that I wanted to ski has been awesome,’ Sprang said. ‘My skis track really well on the groomers and are perfect for powder and hitting booters. I’m definitely stoked to be a part of this process. Working with big companies, it was always hard to change things. I haven’t compromised a single thing working with Slant.’

Slant’s three women’s models dovetail nicely as well. One model is a fatty rockered pow ski, another is an all-mountain charger, and the third is a shapely park and pipe ski. The women’s models have a softer flex pattern but use the same materials as the men’s, including a vertically laminated bamboo core and carbon-fiber stringers.

A few of the first skis Bennett made this season have become a demo fleet that he will be offering up for public joyrides at local resorts this winter. Look out for news about dates and locations of these demo days on Slant’s Facebook page or their website, slantskis.com. The Slant website is also the only place to purchase their skis; these exclusive local shred sticks are not available in shops just yet.

Flipping the script to snowboards, Truckee local and big mountain snowboarding legend Jeremy Jones recently founded a new board company called Jones Snowboards. The Jones’ boards are designed and tested in the Sierra but are manufactured by Nidecker, a family-owned company based out of Geneva, Switzerland, that has been making snowboards for 30 years.

Jones’ four-board lineup is a direct reflection of the freeride pioneer’s favorite terrain and riding conditions — steep and extra deep. There is a powder-specific board aptly named the Hover-craft, an all-mountain fun board called the Mountain Twin, and a freeride weapon built for technical lines called the Flagship. The pro-model of the Jones’ boards is arguably the Solution — a split-board version of the Flagship designed for backcountry snowboard touring. Jones has dedicated the last two years of his career to riding and filming wilderness snowboard descents that he climbed using human power. This low-impact green message is also apparent in Jones Snowboards’ construction practices as the boards feature sustainably harvested wood cores and recycled p-tex bases.

Demand for Jones’ boards has been overwhelming so you’ll want to act fast if you’re interested in owning one this season. They are sold locally at Porters Sports and the Back Country.