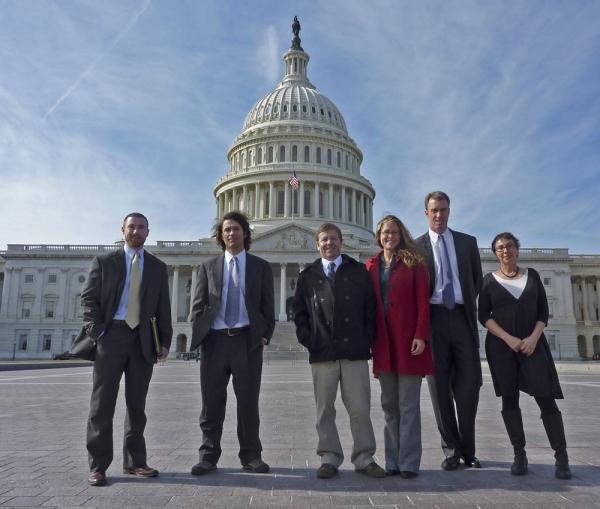 With a dump of seven feet over seven days, it’s a no brainer as to what the bulk of Tahoe locals were doing on the morning of Jan. 27. Restaurant staff were gearing up for another tourist crush, ski resort personnel were still digging, and all of those not committed do-or-die to some variety of ‘work’ were rushing to the lift lines and skin tracks. Whether for work or for pleasure, everyone was hustling and heeding the call of Old Man Winter’s finest ‘crack’ — the drug with a street name of ‘face shot.’

But amongst the Tahoe masses that you might have bet money on lacing up their boots that morning, there was one full-time pow hunter that was conspicuously absent from the lineup at KT-22: pro snowboarder Jeremy Jones. The legendary big mountain rider wasn’t hurt, nor riding blower in some far off land as you might have imagined. He did wear a suit that day, though it was quite a different costume than his usual pit-zipped and pow-skirted three-layer laminate tuxedo.

On that Wednesday powder day, Jones and a muscle-bound crew were on a climbing trip to one of the steepest and most formidable marble-walled mountains a winter sports athlete has ever attempted to scale: Capitol Hill in Washington, D.C.

Jones climbed the steps of the Capitol that day on behalf of Protect Our Winters (POW), the environmental nonprofit he founded in 2007 as a voice for the winter sports community in the climate change discussion. The Truckee father of two was joined by Chris Steinkamp, executive director of POW; Steve Jones, founder of Teton Gravity Research (TGR); Elysa Hammond, director of environmental stewardship for Clif Bar; and Elizabeth Burakowski, a PhD student in earth science at the University of New Hampshire’s Complex Systems Research Center. The goal of the group’s expedition was to share the economic, social, and intangible values of the  ‘face shot’ with Congressional lawmakers working on a climate change bill that’s currently stuck in the Senate.

Riding the invitation of Representative Jared Polis (D-CO), the POW coalition’s two-day agenda included a screening of ‘Generations,’ a short film about climate change produced by TGR, POW, and the North Face, and one-to-one discussions with representatives from several U.S. mountain states. Jones and his group were extremely well received and met with six lawmakers: Representative Peter Welch (D-VT), Representative Jay Inslee (D-WA), Senator Michael Bennet (D-CO), Senator Max Baucus (D-MT), Senator Jeff Bingaman (D-NM), and Representative Polis. If you know anything about Washington, getting this much face time in two days, let alone a week, is virtually unheard of — the equivalent of finding a clean line in Squaw’s Fingers at 11 a.m. on day with two feet of fresh.

The congressmen and their staff were all ears for POW coalition’s message as they illustrated a perspective on climate change that is not often seen nor heard in Washington. POW represented me and you, and the locals of every other mountain town that value snow down to the roots of their culture and economy. Looking back on the trip, Jones said their fresh voices resonated strongly with with everyone they met.

‘Washington was excited to have an organized group representing the winter sports industry, and they appreciated hearing from someone other than the oil industry on these issues,’ Jones said. ‘The meetings were intense but talking with the people who are deciding how climate change will affect us for generations to come is one of the most important things I’ve ever done.’

All of the congressmen that the group met with were key players in the climate and energy debate but were also from states that were already in favor of the bill. POW provided these approving lawmakers with first-hand evidence of how climate change will directly affect the $6 billion winter sports industry to use in discussions with senators still on the fence.
But despite their warm reception, the impression the POW group left Washington with was that it was going to take more than just one hand-delivered message to pass the bill. It’s going to take thousands of messages.

To help inspire that effort, POW has created an action alert network asking snow lovers from every U.S. state to write or email the wavering senators and impress upon them the importance of passing a climate bill. Living in California means you won’t be writing to House Speaker Nancy Pelosi (D-CA), who is all for the bill, but instead to the senators of states such as Idaho, Wyoming, and Utah. Your rationale as an out-of-state resident can be quite simple — why should I vacation and spend money in a state that doesn’t value preserving our winter climate?

If the climate bill is to be passed, nearly a dozen senators need to pledge their support in the next 60 days. Flooding those key senators’ inboxes with persuasive statements from across the country may be the only way it can be done.

For more info on how you can help address these influential congressmen, log on to protectourwinters.org and look for a link to the climate bill action network. The site will give you all the tools you need to contact multiple lawmakers and embolden POW’s message — long live the ‘face shot’ and the culture, community, and economy that its pursuit supports.