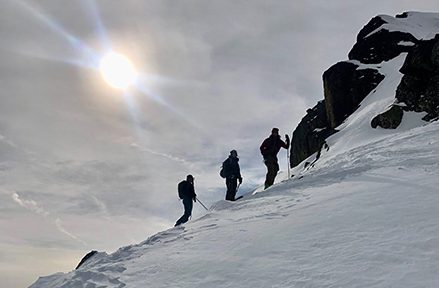 It’s sometime around 5 o’clock when Maggie, Rachel, and I find ourselves pulling up to the Blackbird Inn, about an hour north of Truckee, off of Highway 89. A nearby sign declares, “Welcome to Clio. Population: 74. Dogs: 36.”

The place is adorable and the innkeeper welcomes us as a band sets up equipment for the night’s live music on the first floor of the Ricochet Cafe. Upstairs we find one hallway, five rooms, shiny wood floors, and crisp white sheets on large queen beds. Downstairs, three more friends join us as we dine on crafty waffle-based entrees accompanied by Dope is King Pale Ale from Blairsden’s The Brewing Lair to wash it down. It’s now 6:30 p.m. Alright, team — showtime!

We step into the cozy red Intorf Lodge, set at the bottom of Plumas Eureka Ski Bowl, where we would come back the next day to watch the legendary Longboard Races. The fire crackles and the stage glows in an exuberant shade of blue. After introducing Willy Tea Taylor, one of the show coordinators offers his condolences to the community for the passing of Cole Comstock, a Blairsden local who passed away in an avalanche at Alpine Meadows the day prior. As we raise our beer cans in unison and slurp one down for Cole, Willy steps up to the mic and brightens the room right back up. Man, this guy has the voice of a folk-singin’ angel. He’s back on the booze, he says, cracking jokes (possibly metaphors?) about being a burger between two buns. “I’m meat, cheese, and bread. That’s it! I don’t mess with no lettuce or nothin’.”

Willy also manages to work some improvised lyrics about longboarding and Dope is King into the riff. Laughter and chatter fill the room, and we are loving every second of it. Three girls in Bavarian garb dance around us, sipping whiskey out of a massive flask, “warming-up” for the races tomorrow in more ways than one.

We stop at the Mohawk Tavern on the way back to the inn. I personally re-name the tavern the “Leaning Tower of T-Club,” as the 500 square-foot establishment is leaning at what seems to be a 25-degree angle. It has that quintessential dive bar charm you can only hope to find in the middle of the Lost Sierra. Pool table? Check. Glowing neon signs? Check. Hundreds of dollar bills dangling from the ceiling? Check. The longest story you have ever had to listen to from the local Chatty Cathy? Check. Ten for 10; highly recommend.

The next morning was spent with a mild hangover (also known as a “personal problem,” as Rachel would soon clarify), hotel coffee, a hike up to Eureka Peak, and party-wave soul-tunes all the way down to the races. High fives all around. We crack a beer and watch as the contestants fly down the bunny hill on their 13-foot wooden skis, leaning back for dear life in their leather boots and bindings.

What a weird, special place. If you’ve been to the Plumas-Eureka Ski Bowl, you know that you have found one of the Lost Sierra’s best-kept secrets. Western pioneers once traveled thousands of miles to find gold within these golden hills. What they discovered was a treasure of sorts: rugged peaks, lush valleys, and isolated beauty. Turns out, in the Lost Sierra, you might just find what you’re looking for.

Quick Trips: Find Yourself in the Lost Sierra
Sports & Outdoors / Wellness
10:00 am

Quick Trips: Find Yourself in the Lost Sierra
Education