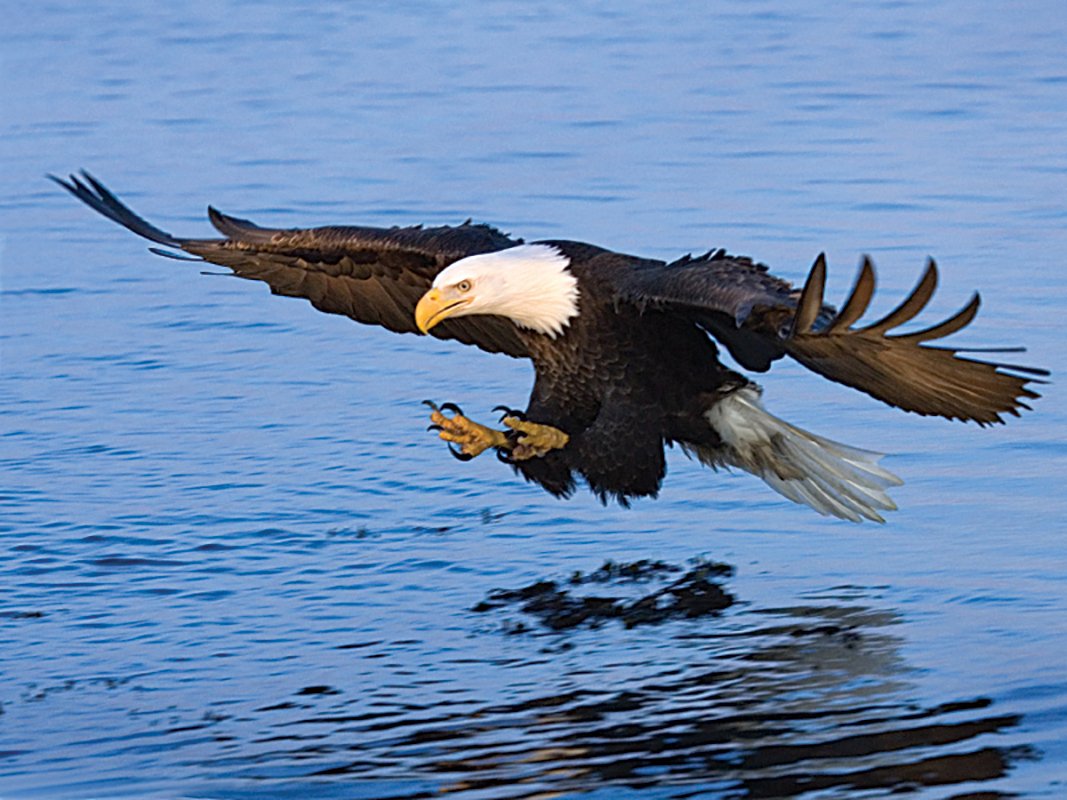 It seems only fitting to choose the bald eagle for this month’s Nature’s Corner. After all, we recently witnessed a presidential inauguration, and although work remains to heal division in the country and the pandemic continues to ravage the country, we are still the United States, and the bald eagle still represents us. But what do we know of this grand bird as our symbol? And what do we know of its true life?

The bald eagle has emblazoned America’s Great Seal since 1782, reflecting the values of the Founding Fathers. On the emblem, the bird holds in its beak a waving ribbon with the words e pluribus unum, which translates to one from many, symbolizing our one nation from 13 original colonies. Thirteen red and white stripes and 13 white stars further proclaim the unified settlements. In one claw, the eagle carries an olive branch, a symbol of peace, in the other, a warring set of arrows. It gives one pause to consider what these icons mean today.

Benjamin Franklin, an opponent of the bald eagle as a national symbol at the time of its proposal, said of the winged creature, “He is a bird of bad moral character.” Franklin pointed to its thieving ways, stealing fish from other birds, and its lack of courage in fighting off pestering smaller birds. He thought more highly of the wild turkey.

Broken down, the bald eagle’s scientific name Haliaeetus leucocephalus, in Greek means hals (sea), aetos (eagle), leukos (white), kephale (head), or sea-eagle-white-head. The bald eagle is not bald, of course, but its prominent white head could be interpreted as such.

Size also helps in identification as the bald eagle’s 7-foot wingspan secures it as the second largest bird of prey in North America, after the condor. Its beady yellow eyes, yellow beak, and yellow mouth distinguish it from other large birds as well.

The white head and tail stand out as characteristics that make the species easy to identify, but juveniles with brown heads are often mistaken for golden eagles. To tell the difference, if one can get close, a bald eagle’s legs are only feathered at the tops, in contrast to those of the golden eagle, which are feathered all the way down. Another identifying trait are white lines or panels on the underwings and tail of an immature golden eagle, while bald eagles have more of a muddier shade.

I can attest to a bald eagle’s diet of carrion, having just witnessed one in Modoc county claiming bits and pieces of some dead critter in the road while warding off a group (displaying its unkindness) of ravens. I’ve also seen them fishing, or rather, carrying fish in their talons, flying back to their young from a lake that borders their huge nest — usually 2 to 8 feet high, but they can be as much as 20 feet deep. Fish is the eagles’ preferred meal, although they also consume small waterfowl, rodents, small mammals, and snakes.

The bald eagle has quite a long history of protection — after 1940. Before that time, it was widely hunted. The Bald Eagle Protection Act (the golden eagle was added to it later) of 1940 arrived to prohibit hunting except in Alaska. After World War II, the pesticide commonly used in agriculture, DDT, influenced a decline in number of births (due to eggshell thinning) and healthy young eagles. In 1972, DDT was banned and the eagle was included in the Migratory Bird Treaty Act. Then the big one came in 1973, when the Endangered Species Act was signed into law. While the bald eagle was already protected under the 1967 Endangered Species Preservation Act, its protection was maintained in the Endangered Species Act (in 1978) in the 48 contiguous states, with the exception of several states in which the bald eagle was considered “threatened,” a less dire situation. In 1995, the United States Fish and Wildlife Service announced that bald eagles had recovered where populations considered “endangered” were instead “threatened,” and so labeled them as such in all states.

But the pendulum often swings back

With numbers increasing after years of protection, the bald eagle was removed from the list of Threatened and Endangered Species in 2007. However, it remains on the Bald and Golden Eagle Protection Act, which prohibits killing, harming, or selling eagles or their nests or eggs, unless allowed by permit. The Migratory Bird Treaty Act — which includes partners Canada, Japan, Mexico, and Russia — also continues to protect the “Washington Eagle” (Audubon’s nickname). Under this law, California upholds the protection of the bald eagle.

Federal agencies have been counting members of the species in the Tahoe region since 1979. The Tahoe Institute for Natural Science (TINS) took over that task in 2012. This year’s January number was a whopping, record-breaking 42.

In looking at this grand bird’s natural history, during spring and early summer, after about a month of incubation, one to three eaglets hatch in a nest built of sticks, grass, moss, and feathers (called aerie) that a pair will often use year after year, adding more material over time. The parents, mated for life, are industrious in their feeding of the nestlings, tearing apart fish or carrion and feeding the pieces directly into the eaglets’ mouths. Comfortable in their home, the offspring remain in the nest for up to three months before flying. Once fledged, they return to be fed for a month or more. Not until the eaglets are 4 to 5 years old do they develop the white head and tail, about the time they begin to breed.

With an average lifespan of 20 to 30 years, we have plenty of opportunity to watch these grand “fish-eagles,” as they are also known. In the Tahoe/Truckee region, they can be spotted around the Truckee River, Donner Lake, Serene Lakes, and the Boca, Stampede, and Prosser reservoirs. Once some of these waters freeze over, the birds will move to deeper Lake Tahoe.

A friend of mine had the good fortune of observing an eagle “paddling” at Prosser. Watching this amazing feat on video, I learned that a bald eagle will swim to shore, using its wings like oars, when a fish or waterfowl is too heavy to carry. Some videos show an eagle dipping its head under water between butterfly strokes like a professional swimmer. Another sighting, this one at Tahoe, involved a bald eagle dragging a coot in its claws.

In February, some of our bald eagle residents move to Carson Valley to take advantage of calving season and the delicacies of afterbirth and stillbirths. They seem to know what’s coming, as do eagle enthusiasts.

When questioned about any strange behaviors he’s observed, TINS executive director Will Richardson shared an interesting hunting strategy. As waterfowl — grebes, coots, and common goldeneyes — are some of their favorite fare, bald eagles will swoop and arc just above the ducks, waiting for the divers to arise. But if the duck is too quick and keeps submerging, the eagle can only fly for so long before it needs to return to its nest to catch its breath. “It’s a battle of lung power for both duck and eagle,” Richardson said. “How long can the duck stay underwater, and how long can the eagle keep flying above it?”