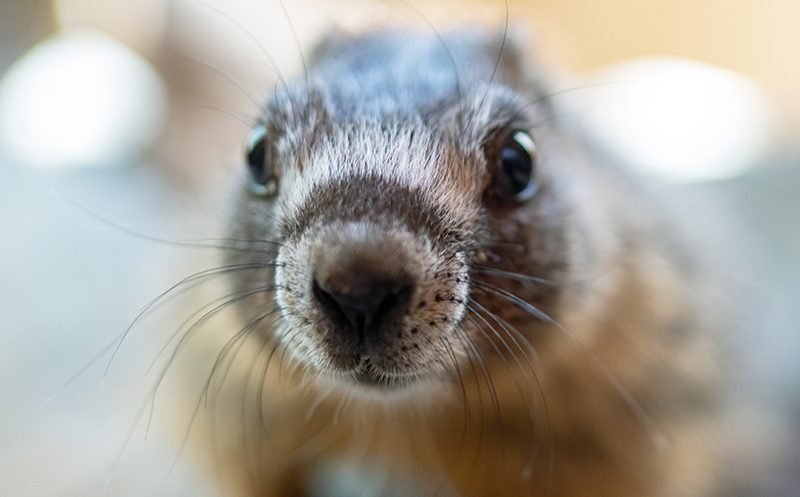 As I approach the South Shore wildlife center, I am met by a tall electric barbed wire fence and two gates heavy with chunky steel locks. I am wondering if I have found the right place.

From the other side of the fence, Susan Strating, a longtime board member of Lake Tahoe Wildlife Care, sees my hesitation and calls out, “I know this fencing can be intimidating but it’s to prevent any of the animals from leaving — or from entering for that fact. Bears, you know. Let me unlock the gate and let you in.”

Once I enter, Susan begins by sharing with me the center’s mission. “Our goal here is to rehabilitate and release,” she explains. “We give the animals and birds the medical care they need and raise them to the point where they can live in the wild on their own.”

Before she can tell me anything more, the hustle and bustle of running such a place as this begins, as a woman approaches us with an injured animal.

12:00: High noon. The woman carries a large cardboard box. Inside the box, a tiny chipmunk, no bigger than the palm of one’s hand, curls itself into a little ball. “Poor little thing,” the woman says. “He’s shaking. Can you help him?” The little ’munk is swiftly whisked away.

12:15: Animal Care Director Denise Upton introduces herself and leads me to a scale outside her office. “It’s time to weigh our baby porcupine, only 3 to 4 weeks old. He came in malnourished, so we give him milk three times a day, apples, squash and corn — whatever’s around. He’s very demanding now. How do we know it’s a male? Even as they have internal sex organs, the vet can figure it out. You can see that baby porcupines are born with soft black quills.”

12:25: Next, I am led just 20 feet away to Emerson, aka Em, a bald eagle with one wing found injured at Emerald Bay. Standing regally upon a large perch, he keeps his eyes focused on me, the new observer. “He is one of our few educational birds that remains here,” a handler explains. “Because he can’t fly, we can’t reintroduce him back into the wild. He can walk and hop onto short stumps, but that’s about it. We keep him at a good weight, not over 8 pounds. More weight than that makes it hard for an eagle to balance on a perch, plus they can develop foot problems.”

12:40: Sally Sjolin, another long-term board member and volunteer at the center, walks toward us, one hand closed into a fist. When she uncurls her hand, two baby chickadees, hairless and featherless with yellow bulbous slits for eyes, lay motionless. “They must have fallen out of the nest right after they were born.” She talks about returning them to their nest, having been told its location.

12:55: Next stop is a building that currently houses two bear cubs, three coyote pups, and three bobcat kits. Unfortunately, I am not privy to see any of them. “The less human interaction the better,” director Denise explains. We want to keep human contact to a minimum. We don’t want humans to become their imprint.” What I am able to see is a live webcam of the two cubs playing on a tire swing. I am also able to hear a pitiful yip from one of the coyote pups. Denise clarifies the mournful cry: “The pups are missing each other. One pup we’ve had for 10 days, the other two came in yesterday, but we can’t put them together until we get their fecal tests back and they prove healthy. At that point, we’ll vaccinate. As for the bobcat kittens, they’ll soon be moved to a new sturdy building built by volunteers.”

When it comes to bears, “We put them back into the wild when they’re at least 100 pounds. The two cubs that are here were only 14 pounds when we got them, so they’ll be here awhile,” Denise further explains. “Sadly, we had to euthanize the mom, but we did so in the field, which is the best scenario. She was very thin, barely able to walk; she was in misery. Other animals, such as the coyote pups, we’ll release them once they can fend for themselves. That’s the rule: Only until an animal or bird is strong and capable of obtaining food on its own, will we take them back into the wild. We also look ahead and consider questions like, ‘Come winter, will this migratory bird be able to fly back to Mexico?’”

1:10: The second building I enter houses two juvenile 8-week-old great horned owls. One owl stands atop a box nailed close to the ceiling, the other glares from inside the box. “They come from different areas,” Denise explains. “One of our guidelines is to ‘pair up,’ except the ones that are usually solitary, such as the porcupine or skunk. Grouping is key, packs are vital, even if, say, we have three coyote pups from different families.They will still bond and innately determine who is the alpha and where everyone fits in the pecking order. If we have just one coyote or one bear or one owl or one of anything, we reach out to other facilities to find a buddy. Those facilities do the same with us.”

1:20: Sally walks up to Denise, Susan, and me to tell us the good news. “I found the chickadee nest over at the community college, in a rock wall. With a tongue depressor, I slipped them into the nest. I also added a few rocks in front of the nest so the chicks wouldn’t fall out again. But, honestly, it’s not a very safe place so low to the ground.”

1:25: As I head to my car, one of the red-tailed hawk handlers approaches: “We’re leaving now to release the red-tailed hawk. He’s strong and ready.” Susan turns to me, wants to be sure I understand the meaning of this momentous occasion: “This is what it’s all

about. Did I tell you, too, that we just released three bear cubs?”

“Currently, we have four bobcat kittens, three coyote pups, two bear cubs, one spotted skunk, one striped skunk, three short-tailed weasels, two owls, one harrier hawk, one red-tailed hawk, and numerous gray squirrels, Douglas squirrels, and chipmunks,” Denise says. “Our permanent ‘educational’ residents, unable to live in the wild on their own, include Em the Eagle, two kestrels, two owls, and a crow.”

She goes on to explain that with COVID, the work has been overwhelming for the center’s two full-time and two part-time employees. “We get up to 40 phone calls a day and many walk-ins,” she says. “Without our volunteers, all 60-plus of them, eight to 10 working a day, we’ve gotten little sleep. But I still love this job. I’ve worked here over 20 years and [have] been full-time for four, and every day I learn something new.”

While Denise briefly steps away, Susan fills me in on LTWC’s founding and funding. “It started in 1978 by Tom and Cheryl Millham with a small facility; now we have this big beautiful one,” she says. “The new facility opened in October 2019 on 26 acres with 5 fenced acres. We are the most excited about the raptor flight cage, funded by The Bentley Foundation, opening next week! The raptors will finally be able to fly on their own in two very large areas. We have also obtained funding for an educational amphitheater by Tahoe Blue Vodka. Other donors include Boa Vista Orchards of Apple Hill, Bread and Broth, Raley’s, and Holiday Market.”

Denise returns and chimes in, “To be funded, we have plans for a main building, instead of our tiny office. Also, it would be a dream to have our own medical equipment like an X-ray machine instead of constantly having to transport our animals to Dr. Kevin Willits and his team at Alpine Animal Hospital. And of course, there’s always our day-to-day operating expenses.

“We are a nonprofit with no government sources of funding, but we’re lucky to have had some generous private donors and to receive grants,” Susan shares. “Still, as you can see, there’s a lot going on here!”

A lot, indeed! Within my brief hour and a half visit I saw a wide variety of animals and birds being rehabilitated, two people approach the center for help, and volunteers coming and going. Lake Tahoe Wildlife Care is truly a valuable resource for Tahoe and its outlying regions to have such. After all, living in the wild is how wildlife should live.

How Best to Live with Wildlife: Raccoons, bears, coyotes, birds — all wildlife — observe them, educate yourself about them, but don’t interact with them, Denise advises. Don’t feed them or leave garbage or compost piles exposed. Don’t make them your pets. They are wild, and wild creatures survive better without human intervention. Lake Tahoe Wildlife Care cares for injured and abandoned animals and birds, and ultimately releases them. It doesn’t keep wildlife just to keep them. Their range of service includes: Lake Tahoe, Truckee, Donner Summit, Sierra Valley on Highway 89, toward Roseville on Interstate 80, and toward Topaz Lake on Highway 395