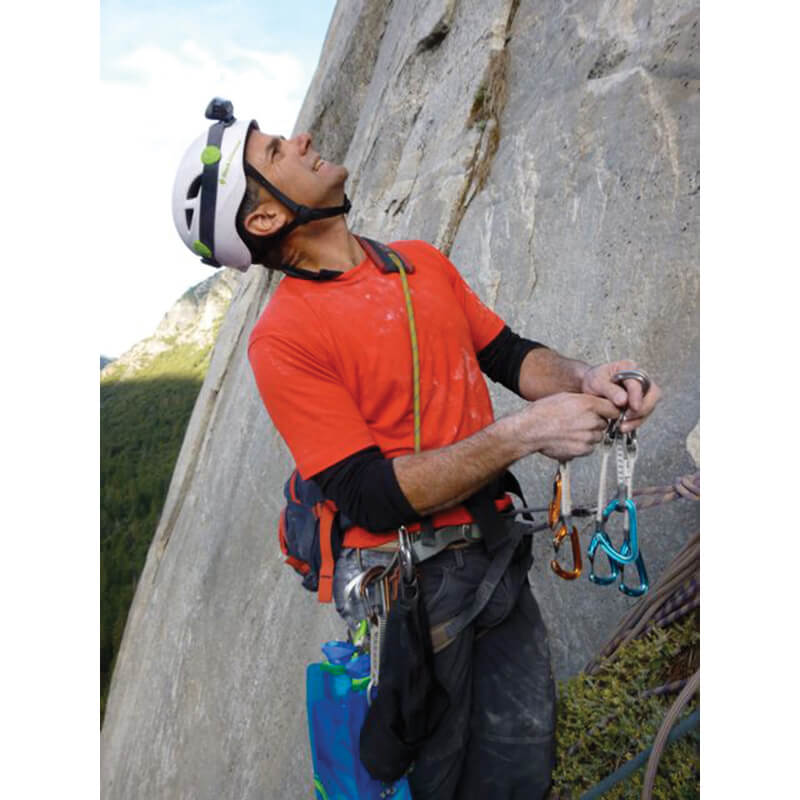 After meeting 54-year-old Peter Mayfield — entrepreneur, mountain climber, and mentor — I was impressed by his take on life: get people in the outdoors and see how they change. Mayfield directs the Gateway Mountain Center in Truckee, a place-based learning and adventure program for youth.

Mayfield planted his roots on Donner Summit when he was a young child, and his introduction to climbing as a 10-year-old Sierra Club kid changed his life. He says he passed a climbing area at a park in northeast Berkeley and noticed lines hanging from a rock. He inquired, and his climbing life began. “I was in ski clubs and came up [to Tahoe] from the Bay Area on weekends, but once I became a climber, I realized I needed to go toward cross country skiing.” He first skied with his cousins at Clair Tappaan Lodge in Norden, Calif., when he was in seventh grade. During his last two years of high school (’78 to ’79), Mayfield worked at Royal Gorge Cross Country resort on Donner Summit.

“I have a long relationship with that landscape. Even though it was just a weekend thing, elements of the Truckee community came through.” Mayfield said. “The ski instructors from Royal Gorge ate dinner in Truckee at Fermin’s Mexican restaurant [now Casa Baeza]. I became friends with a long-time resident, Lynn, who worked at Alpenglow Sports across the street from Fermin’s. Even then, I was building connections in Truckee as a teenager.”

Mayfield describes his life as having lived in a triangle — Berkeley, Yosemite, and Truckee — which he has completed twice. He grew up in Berkeley, then moved to Yosemite at age 15 to teach climbing as the youngest outing leader for the Sierra Club. “I was too young to have a license, but old enough to teach,” he says. Then to Truckee to help his friend Max Jones start up Spooner Lake Cross Country, and on to work at Tahoe Donner Cross Country in its second season as chief instructor for director Glenn Jobe.

In the mid- to late ’80s, he moved from Truckee to Berkeley to put his entrepreneurial talents to work. He opened CityRock climbing gym, the third indoor climbing gym to open in the country, and largest of the three.

You say you knew at an early age that climbing had a transformational potential for people. Can you explain?

Climbing is a mind-body connection. I was very tuned in to it as a powerful experience. I knew that when I gave beginning climbers a lesson it changed them. In this day and age, it’s really profound. You could take a golf lesson. Maybe you’re focused, maybe you’re not, but if I took you for a beginning climbing lesson, your limbic brain originates fear. You wouldn’t want to fall and crash on the rocks. Even on your first climb you’re in the zone.

How did Gateway Mountain Center begin?

I moved back to Yosemite when my son Braden was 15. He lived in El Portal with his mother. I wanted to be there for his high school time. My step-daughter Anji was a freshman at [University of California, Berkeley] Cal. I ran a guide service in Yosemite and started working with a lot of low income schools. At that time, Yosemite Institute catered to private schools. I hired their guides for summer work, and they trusted me. They and the Park Service referred people to us. I sold the guide service, kept the school program, moved to Truckee in 2004, and turned it into a nonprofit, Gateway Mountain Center. I incorporated in 2006, so we’re in our tenth year.

Explain a typical program at GMC.

We’re into environmental literacy. We call it ecological literacy. A typical three-day program offers wetlands science, forest science, and human history, which includes the human history loop at Donner Summit. We serve about 27 schools and 1,900 youth from the Bay Area and northern California. In summer, we have three weeks of rock climbing camp and two weeks of Camp Sugar Bowl.

The other half is nature-based therapeutic mentoring. We’re real innovators in the system of care for youth mental health treatment. I’ve worked with Sierra High School and got a grant to do a program called Pass It On! through the challenge of mountaineering. Placer County and the new Mental Health Service Act recognized this innovative program and asked us to join them in mentoring youth. We started Whole Hearts, Minds and Bodies for nature-based therapy. Today, we are a full-service partner of Placer County and we are getting certified as a Medi-Cal provider. That is huge. We work with the highest-need youth.

What’s something people don’t know about you?

I trained as a professional dancer for four years in San Francisco, and I co-founded Project Bandaloop, a vertical dance performance. My son and I are riggers now. We’re going to China together this September.