Home Sections Arts & Culture Zoning in on the Future

It doesn’t matter whether you’re 3 or 30 — when you walk through the doors of the KidZone Museum, something magical happens. For children, it’s like walking through a portal into another land, a place where they can be anyone and do anything. For the grown- ups in their lives, it’s a way to get out of the house and connect with other adults.

For three decades, the KidZone has filled a niche in Truckee and the surrounding North Tahoe communities that is otherwise unavailable without driving to Reno or trekking over the summit to Sacramento and San Francisco. As the region has grown throughout the decades, the longstanding place for hands-on learning disguised as play has grown just the same.

“It’s really [about] brain development,” she said. “That first five years, they have to get those cognitive social skills and gross motor [and fine] motor skills … so they actually can accomplish higher learn- ing later in life.” With a target audience up to age 5, what kids get at the museum is repeat play, in which they can play with things a different way every day.

The current repeat play exhibit, which changes a out every three years, i a small-scale historic Truckee, complete with a train, Chinese herb shop, restaurant, Truckee Hotel, and Coburn Station.

“Often, kids come in here and they forget that it’s play and that it’s not real. What’s a little bit different than some museums is you could play in this whole area,” says Meagher, motioning toward the whole of the room. “We have different play elements, but it’s all combined as one theme and they can play with it in hundreds of different ways … They could make a whole town in here. They can be a train conductor or cook in the kitchen and have a family or sell tickets or take care of the horses.” The only limit is their imagination.

Meagher’s eyes light up when she talks of watching kids playing and how rewarding it is to watch the proverbial wheels turning in their heads as they work through the thought process. They don’t realize it, but everything they do at that age is a learning experience.

There has been a call from some parents to add more STEAM (science, technology, engineering, art, and mathematics) elements to the museum. While STEAM programming is an integral part of education, Meagher says, children must first learn the basics.

“Children have to first have good [brain] development before they can even do STEAM. If they don’t have the brain development by [age] 5, they’re not going to be successful in school later,” she said. “Some parents will say, ‘playing with the train and stuff, that’s fine and everything, but … ’ They really don’t know how valuable that is. That interaction, those kids, that’s how they actually are learning and how they’re going to be successful later in life.”

The KidZone also fosters socialization — and not just for the kids. Parents, too, have reaped the benefits of social interaction with others. “I moved here 18 and a half years ago. I was nine months pregnant with number two and I had a 2-and-a-half-year old,” recalled Kristin Henry, longtime director of the Truckee Rec Department’s Grasshopper and Butterfly preschool programs. “I moved here with my then-husband and had zero friends or family.”

Henry had moved from the coast and was accustomed to neither the altitude nor the harsh Tahoe winters. Her husband was working a lot, and she found herself alone and tired from being pregnant and adjusting to living at high altitude. When she discovered the KidZone, it was life changing. Three years later, she divorced from her husband and found support through fellow moms at the KidZone.

“That place was like my safe haven to go when it was just really a challenging time,” Henry said. “They provided … all the things that the kids needed and all the extra love from people [who] just were open-ended teachers and second mamas to my kids, and [they] all remain my best friends to this day.”

It’s not just Henry who has experienced the lasting benefits of spending time at the KidZone. Her oldest son, Logan, was “obsessed” with airplanes when she first started bringing him there. The exhibit at the time featured an actual airplane kids could play in.

“I’d take him there every day and he would play in the airplane every time,” she recalled. “Now he’s a helicopter pilot and I totally credit the KidZone for giving him a little bit of that spark to want to become a pilot.”

When Henry eventually remarried and had a daughter, the KidZone continued to play an important role in her family life. So much so, that she and her husband, Mark Henry, joined the nonprofit’s board.

The KidZone has come a long way from its humble beginning as a storefront nestled between Tacos Jalisco and 7-Eleven in 1992. And just as it outgrew its original home, the museum is now looking ahead to the future. The demand for services was already growing as the years passed by. But now, the surge of new residents in the area brought on by the Covid-19 pandemic real estate boom has the KidZone bursting at the seams. Not to mention that the temporary structure which houses it behind Truckee High School has exceeded its life expectancy.

“The tent is expiring,” Meagher said. “The lifespan was 20 years, and we are in our 25th year. But the manufacturer has looked at it; the frame is fine.”

The KidZone, formally called the Sierra Nevada Children’s Museum, could be in its new home at Truckee Regional Park as soon as 2025. It will sit upon 2 acres behind the Truckee Rodeo grounds on land leased from the Truckee-Donner Park and Recreation District for 30 years, with an option to renew for up to 70 years. “We hope to have half of the funding by the end of this year,” Meagher said. “If we do, then we can start building next year. That’s our goal.”

The new facility is the stuff that dreams are made of for children’s museum directors, and it will make Meagher’s dream of expanding services to include kids through high school age become a reality.

“We’ll take all of what we do here, bring it over there, and then expand it to kids through high school,” she said, noting that parents frequently request programming for older kids, especially since there are few options for those who aren’t into sports. “They do get forgotten. They can often not feel part of the community or have a strong peer group or even have an opportunity to develop that.” That’s where the STEAM programming will really come into play. The new facility will maintain all the favorite things guests have come to love about KidZone over the years, such as the repeat play exhibits, playground structure, art room, infant area, and the ever-popular airflow tubes. The overall aesthetic will bring the outside inside with nature-based themes rooted in air, earth, and water.

What’s new and exciting is the addition of a STEAM lab — which will be key to programming for older kids and teens — an interactive water feature, a “den” for teenagers, and an expanded outdoor area. 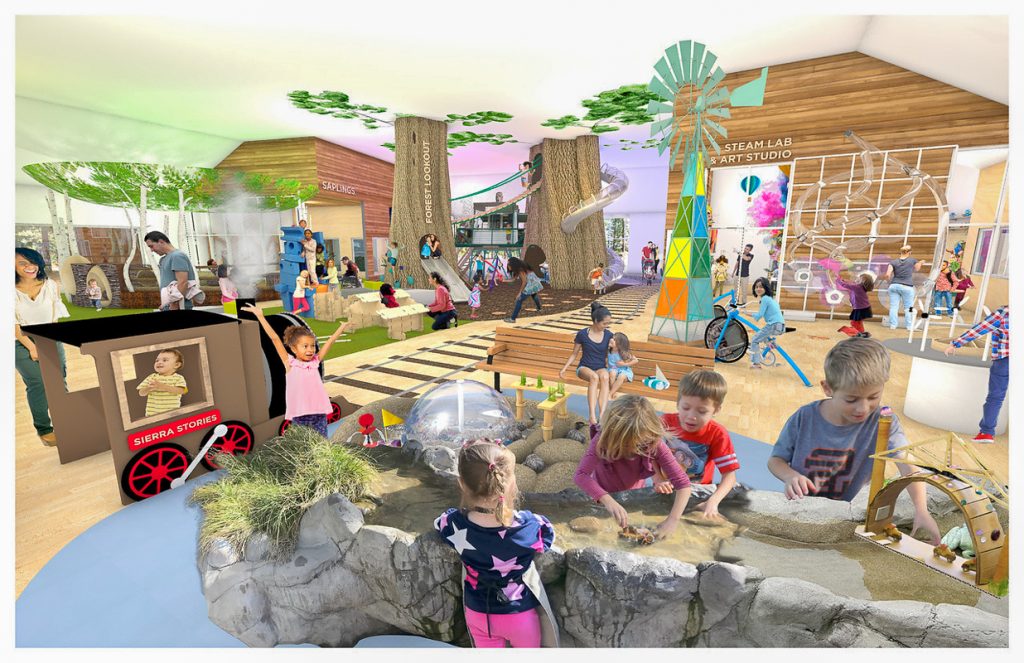 “It will really be the only dedicated space for children and families with special needs in the region,” she said. “Some of our families have come to us saying they want specific opportunities for their children with special needs, and that’s what we are aiming to provide.”

KidZone has long hosted a Special Night at the Museum. Designed around parental feedback, the museum hosts profession als in areas like physical therapy who work with children with special needs. They do activities and talk with parents about different programs and activities they could do with their kids. “We’re going to continue to seek expert skill to make sure that we provide the best of the best for our museum that help kids with a variety of develop- mental needs,” Meagher said. “We’re building the foundation for learning [for all kids]. That’s what the museum does. But it will be growing to serve older kids even more.” 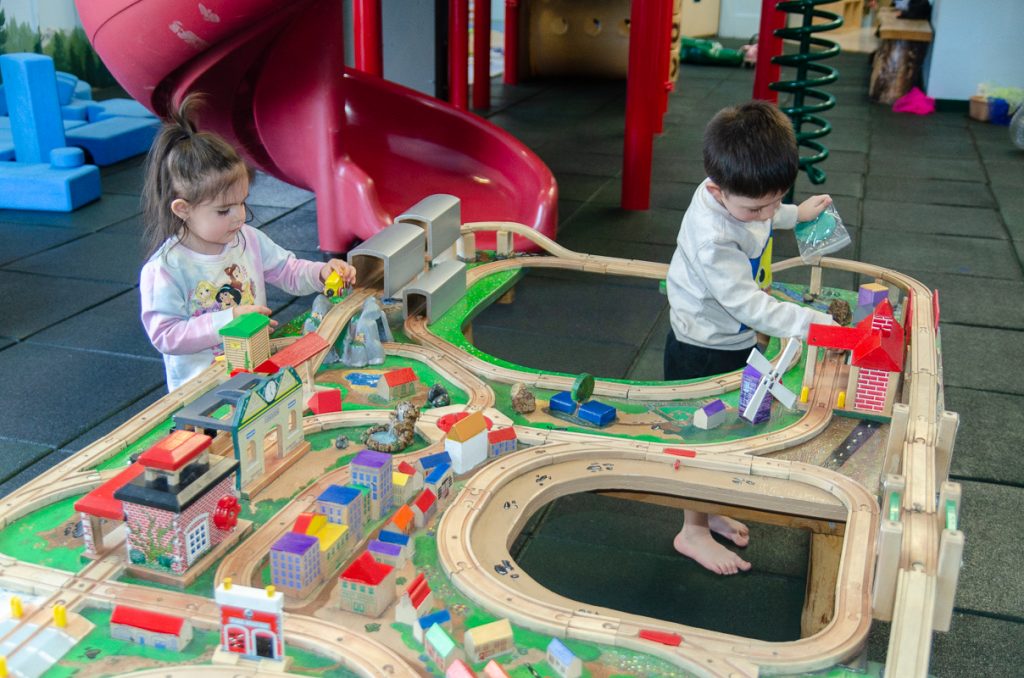