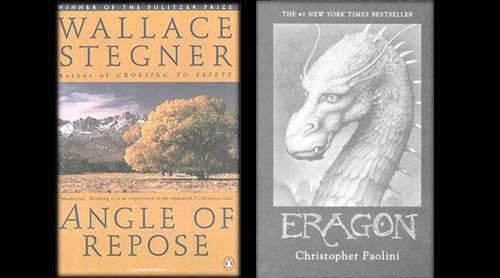 I ‘borrowed’ this book from my parents’ shelves years and years ago. The copy is shabby, with half a cover, and when I picked it up this past fall, had half an inch of dust and dog hair on it. Yet once I started, I was addicted. I toted this book along with me as if I were a roaming astronaut and it was my oxygen. Once I was done, I mourned.

Written in 1970, Stegner received a Pulitzer Prize for Angle of Repose. For me, starting the book was somewhat shocking, but not because the story was a gripping one. It was shocking because I thought this would be an effortless read and to my surprise learned what little knowledge I have of the English language. With dictionary in hand, I delved into a disabled man’s (Lyman Ward) quest among hundreds of letters and illustrations to discover his legendary grandmother’s (Susan Ward) history.

Bouncing in and out of the past (late 19th century) and the present (1960s), Stegner relays the difficult life of the Ward family as upper class Susan Burling marries geologist Oliver Ward and begins their life in the early American west, away from everything and everyone Susan has ever known. As they chase employment around these early settlements, their marriage, lifestyle and egos become challenged. The story delves into the sublime intricacies of family, friends, marriage, and trust, however also emphasizes the awkward feelings associated with them.

Angle of Repose is not a thriller nor does it have a plot that leaves that ‘feel-good feeling.’ It is more an exquisite example of brilliant writing, character development, timelessness, and emotion. If you are up for a challenging read and want to expose yourself to remarkable writing, I’d highly recommend Angle of Repose. Though if you do not have the vernacular of a literary genius, you may find yourself consulting the dictionary like novice chef does a cookbook for a gourmet meal.

‘Eragon’ By Christopher Paolini
This book often is introduced with almost a disclaimer, ‘It was written by a 16-year old.’ Christopher Paolini started writing ‘Eragon’ after he graduated from high school at age 15 and first published it in 2002 with his father’s publishing company. Since then it’s been picked up by a major publishing company, Knopf Books, and even made into a recently released movie. Pretty good for a book ‘written by a 16-year old.’

But really, the disclaimer doesn’t do the book a lick of justice. It’s an intriguing tale by its own right. When I could carve out a day and a half to read the last two-thirds of the story, I spent it nose deep in the dragon-faced book, taking breaks for meals and water only. It grabbed me and it did so completely.

The story focuses on the namesake of the book, Eragon, a young boy who finds himself thrown right in the middle of a bloody struggle that is several generations old. It’s a world known to the boy only in myths and sketchy stories, filled with dragons, their riders, and ancient magic. As he dives in headfirst, his mind becomes melded with a blue dragon and he hits the road on a revenge mission, but along the way realizes there is something much bigger going on.

Comparisons to other fantasy stories is sorely tempting, but let’s focus on what this book does. The author weaves together a fine story, paying attention to details, but doesn’t get bogged down in minutia. When he does describe something such as the mental exercise of telepathy, he does so in an approachable way, stripping away the mysterious fog usually associated with descriptions of the supernatural. Characters have depth and are allowed to make mistakes. The imaginary landscape is rich and diverse, obviously based on the Montana homeland where the author grew up. To me, the story seems present day somewhere nearby. I like that element – it allows a high level of intimacy. And the basic message remains simple, as is life really: to thine own self be true.

P.S. I did go see the movie. The only redeeming quality of the 20 minutes I sat through was the dragon animation. I give it two giant thumbs down.

Staff Picks for reading in the new year

Staff Picks for reading in the new year
Community / Education