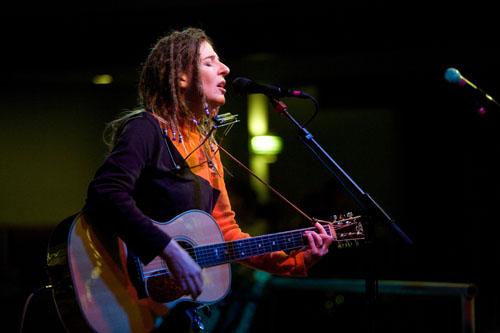 Two summers ago, I went to Tahoe Forest Stewardship Day in Meeks Bay. It was a chilly fall day and people were wrapped in layers of clothing, crowded around fire pits. As I approached the event grounds, a voice stopped me in my tracks. It was enveloping and soothing, carried on crystalline sound that emanated from a makeshift stage next to Lake Tahoe’s shore. I felt the sound encircle the entire gathering, its reach delineated the edges of the event. The words were sincere and ripe with the world of possibility. I stood, transfixed, as the small woman with dreads finished her set. (The follow-up set by Blue Turtle Seduction continued the magic.)

Afterward I spoke with SONiA and she was as authentic as her music. As she wheeled her equipment off the stage, she told me she was from Maryland and handed me a copy of her CD, ‘no bomb is smart.’ That night, I laid on the couch, listening to the CD in the dark, which is the appropriate way to really appreciate a new-to-you album. The musical styles are varied, moving from slow twangy ballads to springy salsa beats to driving rock and the lyrics speak to dedicated fathers, love gone awry, a 93-year old South Bronx woman, and the uselessness of separating the world into good guys and bad guys. It’s music that’s stripped down to the chassis, and has room for development, but is sincere and speaks to the soul. The album remains one of my favorites with several tracks burned into my psyche.

SONiA cites Phil Ochs, Louis Armstrong and Stevie Wonder as strong influences on her work. Now I read reviews comparing her to Bob Dylan. I think she’s simply a soulful woman with a guitar, something to say and the talent to do it well.

And I know when she comes with her band ‘Disappear Fear’ to Center for the Arts on January 18, I will be in the audience, to hear where the last few years have led this gem of a singer/songwriter.

‘I just want to say’