My conversation with Heather Solomon kept getting interrupted. That was to be expected; after all, she was the only one working at Pass It On Thrift when I stopped by on a Thursday around lunch time, and there was a steady flow of people going in and out.

“Did you get your sweater here? I liked that one, so I remembered it,” Solomon asked a customer who was purchasing more finds at the register.

“Yeah, a couple weeks ago!” the patron returned eagerly.

A little bit later, after chatting with a woman named Camila about a pair of corduroy pants she’d found at the store for her son, Solomon mentioned to me that Camila was one of her first customers. “The son she’s buying those pants for was in a carrier the first time he came into my store,” Solomon said.

Camila with the pants, a man named Joe perusing books in the back, the nameless woman who dropped off a couple of boxes of donations and ended up purchasing the incredibly cute baker boy hat I’d been eyeing (I’m not bitter; it looked so good on her) — Pass It On is a local thrift store full of good intentions and beloved by its West Shore community.

“We’re trying to interfere with the waste stream and make a living,” said Solomon, who’s co-owned the Tahoe City shop for 20 years.

About 20 years ago, clothes became cheaper and shopping a hobby, which gave rise to what is known as “fast fashion.” Ideas made popular by catwalks and celebrities are made at increasingly fast rates for über-cheap prices (think H&M, Forever 21, and Zara). For many, clothing is now a disposable commodity and the negative impacts on the planet are enormous.

Fashion retailers worldwide contribute to almost 20% of global wastewater and about 10% of global carbon emissions, as well as majorly contributing to the amount of plastic in our planet’s oceans, according to the United Nations Economic Commission for Europe. In fact, “fashion brands are now producing almost twice the amount of clothing today compared with before the year 2000.” That insight comes from The Environmental Price of Fast Fashion, a report published in April 2020 that looks at the growth and impacts of clothing production.

Solomon points out the difference between buying a shirt in Reno and purchasing one at Pass It On: The gas to get to and from the city, the energy and fuel use that went into shipping the top to the store in the first place, and enriching a big corporation versus a small, locally owned business, with all the domino effects of the dollars staying local.

“If you get a T-shirt at a thrift store, someone brought it up the West Shore in their car or on their bicycle, so it doesn’t get transported, it doesn’t get packaged, it’s not wrapped in a plastic bag,” she said. “You’re supporting local business. It’s not just that you’re not creating demand for new items, it’s also that you’re saving all the things that go into getting a T-shirt.”

On top of the earthly benefits, there’s also the real impact on pocketbooks. In Incline Village, Lupe Tatengo is the store manager at Tahoe Family Solutions Thrift Store. She’s worked her way up into the position; four years ago she started as a cashier. Based on Tatengo’s interactions with the customers, she says the financial aspect is what brings a lot of people through the doors.

“People would rather pay for something used and in good condition than in the store for thousands of dollars,” Tatengo said. “They’re getting here for $50 something that was $1,000. People like to shop in the secondhand store, and they save more.”

Aside from employee wages and overhead, the money going to Tahoe Family Solutions Thrift Store is poured into Incline Village’s community. Last year, Tatengo explained, the proceeds helped 150 local families with their rent and bills.

To be fair, environmental impacts of textile waste (and, again, furniture and housewares) trickle down to the local level, too.

“Sometimes we get things we cannot sell in the store and then it’ll have to go to the dumpster,” Tatengo said. Regarding items that have been in stock for more than a few weeks, she added that the Salvation Army comes every Tuesday to TFS to collect them.

The Salvation Army picks up weekly from Pass It On, too.

“Then they either sell it … or they sell it to rag recyclers,” Solomon said. “They assure me that one way or the other, it all is put to use.”

Tahoe Donner resident Amy Talarico told Moonshine Ink that she most often buys from the Hospice Thrift Store in Truckee, where she looks through their fabric section to create pillows, grocery bags, and, as of 2020, reusable masks with her 13-year-old daughter, Elsa.

The Talarico women have an “always open front stoop mask store” on their porch that’s still in operation (message Amy Jo Talarico on Facebook for where to find it).

“Not only are we getting things from the thrift shop, but friends and customers will come by and say, ‘Oh, I have this vintage fabric, this is my grandma’s, would you make a mask out of it?’” Talarico said. “We’re recycling in all kinds of ways.”

To echo Talarico, and environmentally responsible and smarter financial practices aside, thrift shopping is “just really fun,” Solomon finished. “I feel like shopping at a thrift store allows people to be more [expressive of] themselves instead of whatever this week’s trend is.” 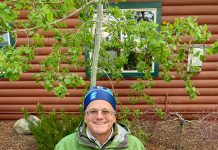 Memoirs of the Brave 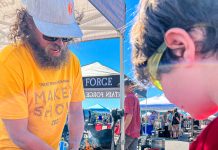 In the Nonprofit Know 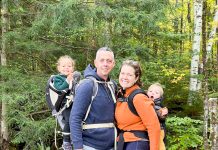 Three for the Price of One: Fighting Fast Fashion, Buying Locally, and Helping the Environment
Business
4:00 pm / 6:30 pm

Three for the Price of One: Fighting Fast Fashion, Buying Locally, and Helping the Environment
Music
6:00 pm

Three for the Price of One: Fighting Fast Fashion, Buying Locally, and Helping the Environment
Music
6:00 pm

Three for the Price of One: Fighting Fast Fashion, Buying Locally, and Helping the Environment
Music