Home Sections News Lawsuit Against the Truckee Raley’s, Poisoned Dogs, and the Second Floor of... 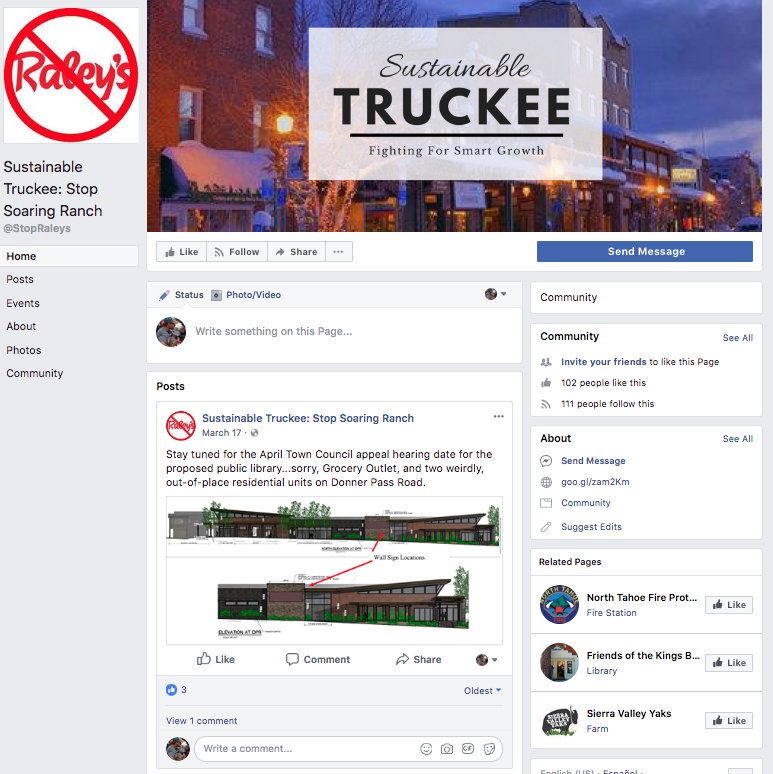 Who is behind the lawsuit filed against the proposed Raley’s grocery store in Truckee?

On April 12, a lawsuit was filed against the Town of Truckee for the council’s approval of the Raley’s project at Soaring Ranch (see Store Wars). The petitioners on the lawsuit were Stefanie Olivieri, owner of Cabona’s, and Protect CEQA, an unincorporated nonprofit with an opaque background. Olivieri said her main reasons for filing were a lack of housing included in Phase One of the project, as well as a need for a more thorough study of how multiple new grocery stores would affect existing groceries and other businesses.

The other plaintiff, Protect CEQA, was founded in 2014 with the proposed mission of protecting the California Environmental Quality Act (CEQA) and promoting smart growth development. It has one apparent employee, Andrew Grundman, who went from a position as its lawyer to its executive director in 2016. Grundman has a long history in the mining industry, and a press release noting his promotion at Protect CEQA lists him as president of Pacific AirWell, “a new company providing water and water recycling solutions.” A look into Pacific AirWell showed no transactions in the last year according to Bloomberg, and a couple of websites with dead-end landing pages or 404 errors.

“Nobody has been able to figure out who is behind Protect CEQA,” said Art Chapman, president of JMA Ventures, the developer for the Raley’s project. “Protect CEQA has protested new grocery stores throughout California … the only consistency was that there was an existing Safeway in that marketplace.”

Chapman said that in all these instances, including Truckee, Protect CEQA has not disclosed who is funding its efforts. Many have speculated Safeway may be involved but the links to the grocer are tenuous. The lawyer in the Truckee case, David Lanferman, has represented Safeway in the past; and of the three employees working for the firm hired by Protect CEQA to analyze the local market, Area Research Associates (ARA), two were directly employed by Safeway in the past.

In the ARA study, Safeway revealed its profits from the Truckee store to be about $48 million a year, a figure that the study cited would drop to just over $21 million if all three grocery stores proposed in 2017 were built.

“You can understand why Safeway, if they are involved, would want to delay this thing — because they’re making a ton of money. But that’s total speculation,” Chapman said.

Andrew Grundman did not reply to multiple requests for comment.

The answer to this “You Asked” remains ambiguous.

I heard about a dog who ate poison at Schaffer’s Mill golf course last year and fell gravely ill. Do I need to be worried about my own dog getting into the substance, and is the wildlife safe?

Last fall, while on a walk with his owners at Schaffer’s golf course, a dog by the name of Bob sniffed his way into a pocket of zinc phosphide, a rodenticide used at many golf courses across the country. Bob almost died, a GoFundMe account was set up to cover his medical expenses, and after he recovered, an investigation into the course’s use of the chemical was launched by the Placer County Agriculture Department — a common practice any time the department becomes aware of an animal poisoning, department commissioner Joshua Huntsinger said.

According to Huntsinger, Schaffer’s Mill complied with the labeled use of the pesticide and was careful to not use it adjacent to the golf cart path. Bob’s owners were walking him off leash at the time, and he wandered far enough to stumble upon the pesticide. Huntsinger said because of the golf course rule against dogs on the cart path — although rarely enforced — and Placer County’s leash laws, that it was “basically dog owner negligence that allowed the situation to occur.” The county did cite the golf course for failing to file a Notice of Intent at least one day before the pesticide’s application. Huntsinger said he was not directly aware of wildlife being poisoned, but it is common knowledge that wildlife does frequent the area where the poison is applied.

Following a Moonshine inquiry to all golf courses in the Truckee area about whether they use the zinc phosphide pesticide, only Ponderosa Golf Course responded, stating that they do not use any rodenticides. ~ SS

I heard that the hospital district plans to use the top floor of the Tahoe Forest Cancer Center for administrative offices. Is this true, and if so, is it an allowable use under the terms of Measure C?

The second floor of the cancer center is currently in the design phase of construction, with an estimated start date of August 2018 and estimated completion date of spring 2019. The space will be dedicated to primary and specialty healthcare services, including physician offices and patient examination rooms.

Details about the specific provider types are still in development, but the area is not intended for hospital administrative office space.

(Editor’s note: Measure C was a 2008 bond measure that funded the construction of the Gene Upshaw Tahoe Forest Memorial Cancer Center and included restrictions on what purpose the funds could be used for.)

Lawsuit Against the Truckee Raley’s, Poisoned Dogs, and the Second Floor of the Cancer Center
Food & Drink / Music
5:15 pm - 7:00 pm

Lawsuit Against the Truckee Raley’s, Poisoned Dogs, and the Second Floor of the Cancer Center

Lawsuit Against the Truckee Raley’s, Poisoned Dogs, and the Second Floor of the Cancer Center
Sports & Outdoors
3:00 pm

Lawsuit Against the Truckee Raley’s, Poisoned Dogs, and the Second Floor of the Cancer Center
Community / Education