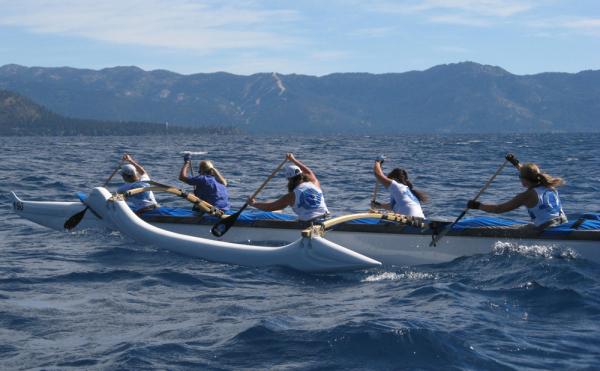 If you spook around Donner Lake come summer you’re bound to see members of the Kawai’ulu O Tahoe Outrigger Canoe Club out on the water. Their 45-foot long outrigger canoes are quite a sight as they flash by, especially with six people aboard each boat, all rhythmically paddling.

Though the Kawai’ulu O Tahoe organization has been plying local waters and racing throughout the region for 10 years now, the decade of practice has recently paid off as their competitive efforts in the last year have placed them amongst the fastest outrigger teams in Northern California.

At the 2009 Round the Rock Alcatraz Challenge held in San Francisco last August, three Kawai’ulu O Tahoe crews paddled to the
podium in the long course race, including their open coed crew, who took first place, and their open men and coed masters crews, who took third. The Kawai’ulu O Tahoe club beat veteran teams twice their size on the way to the finish line.

The Alcatraz results were no fluke, however, as the Kawai’ulu O Tahoe’s master women, open men, and senior master men all took second place racing on home turf in the 2009 Lake Tahoe Canoe and Kayak Classic just a few weeks later. Multiple top finishes at a couple more races rounded out the team’s breakthrough summer of 2009.

Locally, lingering cool waters haven’t slowed the team’s pace in 2010 as they’ve been practicing since April and were already rewarded at the Memorial Day Ho’e Wa’a Race in Monterey Bay. Kawai’ulu O Tahoe’s senior master men took second at the race while the open coed and open men took third. The next chance for the team to repeat their stellar performances will be at the upcoming Alcatraz Challenge on Aug. 7 and the Lake Tahoe Classic, which returns to North Tahoe on Sept. 4 and 5.

While you’d be hard pressed to win a seat on one of the elite Kawai’ulu O Tahoe race teams this summer, the group is wide open to beginner paddlers and offers a free introductory outrigger experience for anyone interested. These weekly practice sessions are held at Donner Lake’s West End Beach on Mondays at 5:45 p.m. If you end up getting hooked on the exercise and team-spirit of outrigger canoeing, there is the potential to paddle with the group six times a week.

Those interested in a recreational opportunity to cruise aboard an outrigger should also note that the new paddle sports shop in Sunnyside, Lake Tahoe Waterman, has begun chartering outrigger canoe tours on Lake Tahoe. Info: Jay Wild, (530) 581-1349