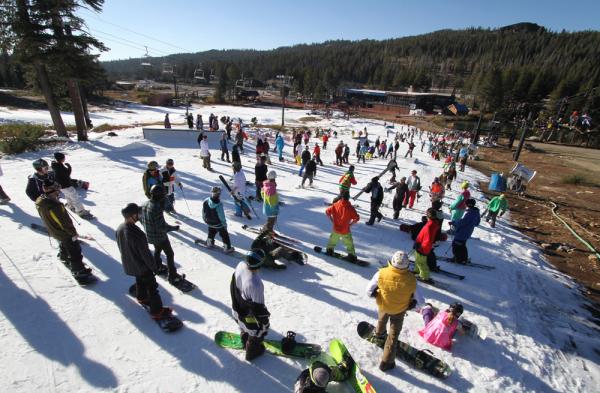 With the creak of a chairlift bullwheel and the roar of a snowmaking gun, a welcome sign of winter arrived in Tahoe over Halloween weekend. On Oct. 28, Boreal Mountain Resort delighted the snow-starved legions by opening the first chairlift in California for the 2011/12 ski season. Though Boreal opened only one 100-percent man-made run, hundreds of eager rippers swarmed the short slope and attacked the handful of terrain park features.

Witnessing the opening day excitement at Boreal, it felt like a blow-off valve had been released on a boiling barrel of anticipation. Between last season’s record-breaking snow totals and a summer full of eye-catching resort headlines, local skiers are chomping at the bit to get back on snow, and rightfully so. We’ve got a lot to look forward to this ski season in North Tahoe.

Aside from the groundbreaking developments (Squaw-Alpine merger) and the trivial updates (the name Northstar-At-Tahoe is no longer; it’s now Northstar California), some of the most exciting recent resort announcements have been those about improved or expanded ski terrain. Northstar, Squaw, and Boreal have all announced upgrades to slopes and terrain parks for the coming season.

The big news out of Northstar is that it’s expanding its resort boundaries in two different areas, adding 170 acres of gladed sidecountry terrain. The resort’s boundary lines will be extended to the skier’s left of the Prosser ski trail on Lookout Mountain, opening about 1,000 vertical feet of new terrain accessed by the Martis Camp chairlift, and to the skier’s right of the Logger’s Loop ski trail, opening about 800 vertical feet of new terrain accessed from the Vista Express chairlift. Northstar will also offer guided tours of these new areas, as well as snowcat-accessed skiing off the back of the resort in the established Sawtooth Ridge sidecountry zone.

I wish I could report that Squaw had seen the light and opened its sidecountry boundaries too, but no such luck yet. On-mountain improvements at Squaw this winter will focus on groomed runs and the terrain park. With a fleet of 10 new snowcats, Squaw plans to enhance grooming on popular terrain, and the resort has enlisted local terrain park building juggernaut Snow Park Technologies to man the snowcats and design its parks. In a press release, Squaw pledged ‘significant resources towards terrain park improvements,’ so between the fresh eyes of SPT and consistent park maintenance this should spell good things for local freestyle riders.

There has never been any question about Boreal’s dedication to terrain parks, and that’s not about to change anytime soon. In conjunction with the construction of the new Woodward Tahoe action sports training center, Boreal announced that it will build a 22-foot halfpipe this season. The Olympic-sized monster pipe will be one of two new places for competitive halfpipe riders to train in North Tahoe. Northstar will also feature a 22-foot halfpipe slated to be a training facility for pro snowboarder Shaun White.

Now if only La Niña would return with a vengeance, we’ll be in business. We got new terrain on the radar, now we need the storms. Do your dance, wash your car, and pray for snow!