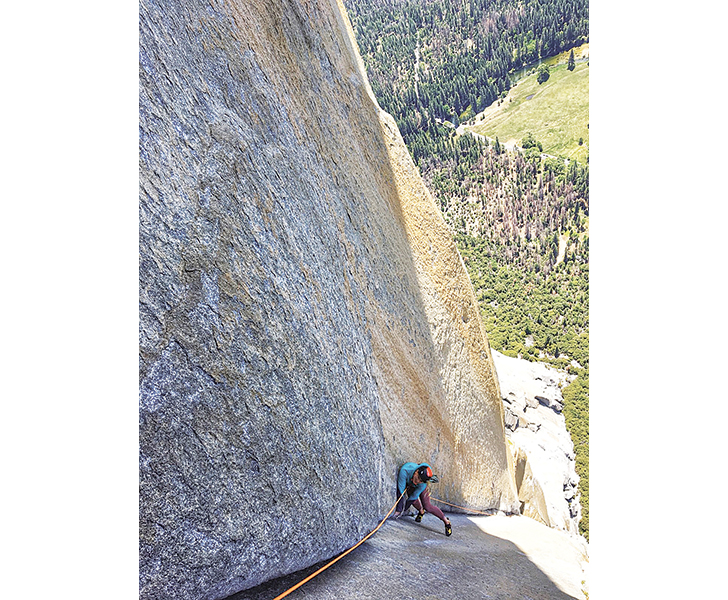 In spring 2016, I was sitting around the dinner table of one of my closest longtime friends — Beth Rodden — in her home in Yosemite West. It was Mother’s Day, and she and her husband Randy had kindly invited me to spend the day with them. Beth’s son Theo had just turned 2 and we were all happily being entertained by his antics at dinner when there was an unexpected knock on the door. In came a disheveled, unshowered Alex Honnold — another good old friend of mine and, if you didn’t already know, one of the most famous rock climbers of our time.

Alex had been a friend since I was 19 years old. I like to say I knew him “before he was ‘No Big Deal Honnold’.” Despite that, Alex was always someone I wanted to impress. His nonchalant straight-talking honest attitude stirred something in me that sought his approval. If Alex gives you a compliment, you know he means it. He’s an open book in that way. You know exactly what he thinks of you, and despite the occasional (ok, frequent) stinging criticisms, I enjoyed his company most of the time.

In this instance we were all more than happy at Alex’s random visit. He pulled up a chair to Mother’s Day dinner and we started up some small talk. Alex, we all knew, had been putting in endless amounts of time on the Freerider route on El Capitan, running laps on the thing like it was the only thing that mattered in the world. Of course, we all knew what that meant, even though he wasn’t saying it at the time: As the world’s greatest free soloist of all time, Alex was practicing to free solo El Capitan.

It was a feat none of us could quite fathom. Even the most seasoned El Cap climbers were nervous about the idea of someone balancing on those smooth glass-like slabs on the Freeblast pitches or executing the infamous “karate kick move” on the Boulder Problem, nearly three-quarters of the way up the wall. I had free climbed (climbing using gear just in case of a fall, but not for upward progress) the Golden Gate pitch on El Cap the prior spring. It took me six days — an amount of time Alex had laughed at, admitting to me he had never actually spent the night up there (“Why would I do that when I can just do it in a day?” Ha.) The idea of Alex up there rope-less was absolutely nauseating to me.

“Hey, wanna do the Freerider with me the day after tomorrow?” he asked me. I had been in the valley, just getting my feet under me in preparation to maybe go up on El Cap in the next few weeks, but was struggling to find partners. Being in the valley with no partner, left me feeling a bit aimless at the time. I was tired and homesick, but I could never disappoint Alex — much less turn down the offer to climb with one of the best Yosemite climbers of all time.

“Obviously,” he said. “It’ll be chill. I bet it takes us eight hours or so. Come onnnnnnn.”

The following day we packed some stuff, gave our approach shoes and some water and snacks to Jimmy Chin and camera crew to stash at various points on the wall (they were filming Alex’s entire journey), and went to bed early with the alarm set for 5 a.m. Most “in-a-day” climbers start climbing around 3 a.m. in order to have enough time. But Alex was confident we would be fast, and besides, 3 a.m. is “uncivilized” as he would put it.

We got to the wall around 6 a.m. and started climbing. I was so stressed because Alex insisted that we simul-climb as much of the route as possible to save time, moving up the wall simultaneously, as the name suggests. I had never climbed this way on anything harder than 5.8, and starting with the first pitch of the Freeblast — with the much more difficult rating of 10c fingers — felt daunting.

“You’ll be fine. Besides, I’ll place micro-tractions right after the 11b crux and on the slab pitches in case you blow it. But you won’t!” were his words of encouragement.

The thing about climbing with Honnold for me is that his confidence and comfort in a place where no humans are meant to feel that confident or comfortable tends to rub off on me. It’s like osmosis or something. I stepped on the wall and immediately felt calm and smooth. In years prior, the Freeblast slabs were heinously insecure and nerve-wracking for me. This time I executed tiny foot movements on the glassy dime-sized edges with laser focus and deliberation.

“NICE, EM!!!” Alex yelled down to me from 200 feet above, casually traversing under the Half Dollar Flake with about 80 feet of rope between him and his last piece of gear.

We arrived at Mammoth Ledges in 90 minutes, after simul-climbing the entire Freeblast in a single push. Alex had only used a single set of cams, a few quickdraws, and two micro-tractions to lead the entire thing. I was exhilarated. In that moment I felt like it might have been the most fun I had ever had climbing. Just moving consistently for over 1,000 feet, focused and deliberate. Nothing else mattered. It was the very essence of rock climbing and it felt beautiful.

As we pressed on, I grew more tired and my speed slowed. I fell out of the Hollow Flake unexpectedly then repeated the pitch — still trying for the free ascent. I managed to lead all the way up to the base of the Monster Offwidth, Alex simul-ing below me, constantly yelling, “you can go faster if you want!”

But, when we arrived at the Boulder Problem, I was stymied. It was in the direct sun and I was feeling a bit of time pressure. I was now moving pretty slow and Alex hadn’t missed a beat. He still acted like he was taking an “active rest day” as he called it. I went ahead and “aided” upward, beginning to use gear to climb, and we kept going — my free ascent of the Freerider would have to wait for another time. It got to the point where I was too exhausted and intimidated to lead anymore, so Alex happily took over.

“You’re doing great!!” he told me at one point. My pride swelled despite my tiredness. Alex would never say that if he didn’t mean it.

I managed to flash the second pitch of the Enduro Corner on TR, but that really did me in. The final 200 feet of climbing felt like pure torture. I even had to be hauled up at one point after falling out of the Scotty Burke Offwidth and ended up breaking down in tears, spinning in space 3,000 feet off the ground with no way to get back on because Alex hadn’t placed any gear for me to grab.

When we finally reached the lip of El Capitan and pulled over onto the summit it had been 14 hours (“pretty dang slow,” Alex laughed), but I was so proud. I had done El Cap in a day! Not free of course, mostly on top rope, and with the very best rope gun in the world. It was incredible.

Just over a year later, Alex free solo climbed the Freerider in three hours, 56 minutes. And I wasn’t all that surprised.