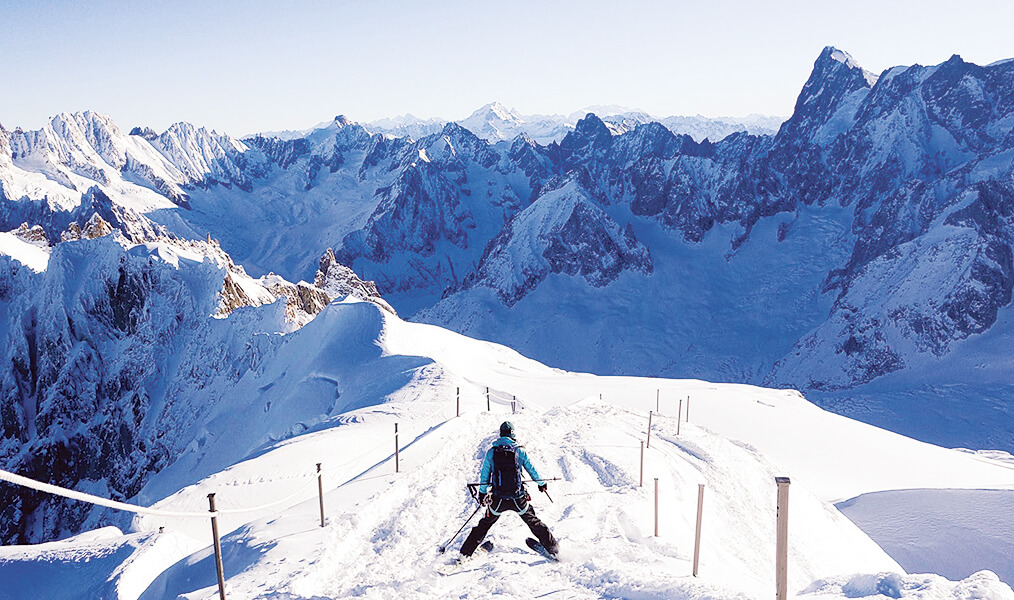 It’s always a treat stumbling upon the kind of unexpected story you’ll only find over a beer. Like watching local flight instructor and mountain guide Sarah Halas animatedly explain how she used a knee bar to almost choke out a male thief who stole her friend’s sweatshirt while hitchhiking through Peru. It sounds crazy, but it kind of explains Halas’ approach to life — she’s gonna do what she feels like, preconceived notions of your typical “chick” be damned.

Halas grew up in Connecticut, where her dad’s job as a ski patroller first exposed her to the beauty and potential of adventuring in snow. She loved skiing then, but it was upon seeing Chamonix, France, for the first time in her early twenties that the sport really dug its claws in.

“I got [to Chamonix], saw those mountains, and I’d never seen anything like it. I was like ‘I wanna go up there,’” Halas said. “How do you do that? Well you hire a mountain guide for like 500 euros a day — yikes, not going to happen. So, I figured the only way to do it was to learn how myself. And there it began, and there it still goes.”

She’s now spent the last three years in Chamonix, not for work but for “professionally fucking around,” she says, laughing. What else would you call it when you’ve achieved your dream? Her fluency in French allows Halas to live near the iconic resort for a few months at a time, freely and cheaply, fine tuning her skills as a ski mountaineer. The high peaks of the French Alps have her heart, but her love of the outdoors has also taken her across the globe chasing snow — from her home away from home in France, to the ancient birthplace of skiing near the China/Mongolia border, to guiding for Ice Axe Expeditions in Antarctica.

In her endless travels, she says the biggest struggle is actually finding partners to ski and climb with. She goes at a pace that not many find the time or freedom to follow. “A lot of the women my age are having babies and getting married and that kind of thing, and I have no interest. All I want to do is be in the mountains,” Halas said. “The hardest thing I’ve skied, I‘ve skied alone because I just was not going to wait.”

She says it’s inevitable when she’s on an expedition that something will come up in the lives of her companions that they need to return to — leaving the next adventure up in the air. She has her own responsibilities, sure, but balancing them toward her passions is her first priority.

“As we get older, people get more and more serious jobs — I mean, shit, my goal was always for my job to get less and less serious, right?” Halas said. The ironic thing is that Halas takes her own job dead seriously. She’s been a professional pilot for over a decade and now runs her own business teaching a flight school out of Truckee. She used to fly commercially, but her new gig definitely affords more time for play.

The business plan for Halas’ company, Truckee Flight Training, sounds like a dream and is an extention of her unbridled passion for the mountains. The flight plans she takes with her students are essentially airborne tours of the West, typically through Colorado, Utah, and back through California. A pit stop for guided skiing along the Eastern Sierra Nevada is not an uncommon occurrence. She also says she’s blessed simply by the clientele her business attracts — inspiring and intelligent people who constantly expand her own world view.

There are other benefits too. Her thousands of hours of flight time across the West give her a bird’s eye view of new ski lines, and more time in the pilot’s seat actually provides some much needed rest in a life that rarely slows down.

“I mean, I work hard,” Halas said. “I’m still trying to figure out the best way to do it. Do you pack all the work into three days — like three long days where you’re exhausted … or do you work moderate days so you can go for a ride afterwards?”

In the end though, she seems to find that balance alright. It’s not that she’s working toward any specific end goal she tells me, just the ever-present drive to thrive.

“The mountains are the thing that make me happy, happier than anything else,” Halas said. “And so I just want as much of my life to be in that zone as I can.”