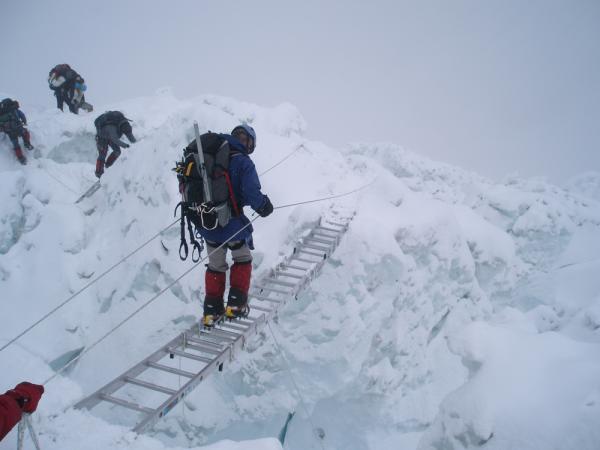 The sun was coming up over the Himalayas as Mike Boaz pulled his iced-up oxygen mask off and walked along a serrated ridge leading to the top of the world.

On one side, the flank of Mt. Everest plunged 12,000 feet to Tibet; on the other, the Lhotse Face dropped 8,000 feet to the jumbled seracs of Nepal’s Khumbu Icefall. At 6 a.m. on May 23, still walking without oxygen, Boaz set his crampon spikes on the summit of Mt. Everest and realized no one was there to take his picture.

What ensued was the world’s most difficult version of ‘find a photographer.’ At a mind-altering altitude of 29,035 feet, cloaked in the alpine climbers’ version of a moon suit, iced oxygen mask dangling from his neck, Boaz waited for someone to document his feat.

Soon, a Chinese team summitted from the Tibet side and Boaz began asking members of the team for a quick snapshot. But the language barrier, coupled with a mental sluggishness common at nearly six miles above sea level, kept the Chinese team from understanding his repeated requests.

Boaz’s sherpa soon made the summit and Boaz handed him his camera. The sherpa snapped off two photos with his fingers obscuring the lens, and then one single, clear shot.

After two months away from Truckee, that lone photo is the singular proof of Boaz’s success in a decades-long quest to reach the highest peak on each of the world’s seven continents.

Many of the other select members of the Seven Summits club are much like Snowbird Ski Resort owner Dick Bass, the originator of the Seven Summits idea — wealthy individuals with a lot of time on their hands. Boaz is a different breed. He owns a mid-sized plumbing company, B&B Plumbing, in Truckee, but by no means does he have the wealth or unrestricted time of someone like Bass. What he does have are two of the most precious commodities in the mountaineering world — tireless legs and iron lungs.

Altitude and its effects on humans is an odd and unpredictable thing. Thin oxygen, exhaustion, and the myriad strange and deadly altitude-induced sicknesses can humble the fittest climber. But some find the dangerously thin air where many climbers struggle strangely empowering. Boaz is among those with a unique physiological adaptation to the high points of the world. It is that gift, and a little bit of luck, that has allowed him to summit peaks as diverse as Antarctica’s Vinson Massif, South America’s Acancogua, Alaska’s Denali, and Everest — all on his first try.

Everest, of course, is the pinnacle of the Seven Summits. Its turbulent and fickle weather and debilitating height make a successful summit as much about luck as skill. Boaz had both.

The former Alaskan sled dog musher and occasional river rafter excelled within International Mountain Guide’s summit team. But even for Boaz, there was a price to pay for reaching the peak.

After weeks in the thin air of the Himalaya, with yak cheese and yak meat for many dinners, Boaz met up with his wife, Colleen, in Nepal. The now scrawny Seven Summits veteran had an odd request for his wife — he looked down at his baggy pants and asked to borrow her belt.