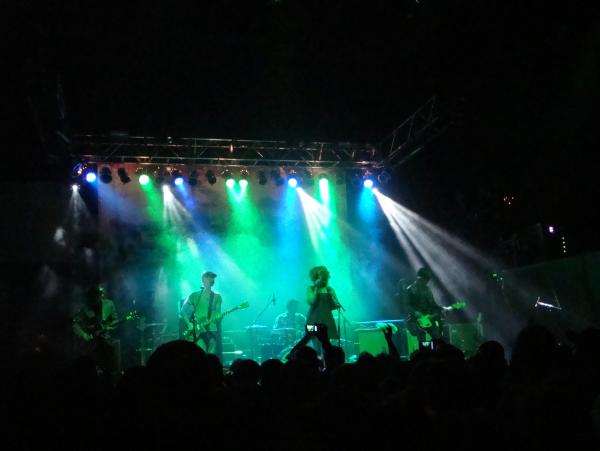 ‘It’s a known fact that Canadians aren’t considered adults until they serve a term in Broken Social Scene,’ says a fan on the indie rock group’s Facebook page. Broken Social Scene’s largeness is certainly something to simultaneously laugh at and be in awe of. The Toronto-based group, which includes anywhere from 6 to 19 members, eschews the term ‘band,’ preferring to call themselves a ‘music collective.’

At their April 20th show at Reno’s the Knitting Factory, Broken Social Scene kept their number modest with a max of 10 musicians onstage. It was strange to see them indoors — backed by the All to All Sebastien Sex Legs Grainger Remix cover image, a graphic mountain landscape — after catching them last at Wanderlust in Squaw Valley a few years ago, where their numbers and large sound was a perfect fit in the open air and real mountain backdrop.

Broken Social Scene is known for being experimental, so it was no surprise to catch hints of disco in ‘Hotel,’ what frontman and band cofounder Kevin Drew called their ‘dance number,’ and a ska beat in ‘Art House Director.’

Tour frontwoman Lisa Lobsinger brought in the drama with her crazy hair, doll-like ensemble (dress over a poofed long sleeve shirt), and incredible, pitch-perfect voice, first on ‘7/4 (Shoreline),’ and most notably on ‘All to All,’ one of my favorite tracks on the group’s most recent album, ‘Forgiveness Rock Record.’ At times, it seemed the vocals were a bit drowned out. Or was it intentional? I could see her deliberately fading her strong vocals, slowly drowning them into the music. Still I craved that hollow echo of sound you hear throughout the ‘All to All’ studio track.

One of the most memorable parts of the show was all the interaction (especially from Drew), a facet missing from a lot of shyer indie bands. He gave the crowd some love, made fun of us, relished in one guy giving him the finger, told some dudes on the front row to ‘get their shit together,’ and then proceeded to interrupt his beautiful intro solo to ‘Lover’s Spit’ to sub in ad-libbed lyrics about the hecklers.

Guitarist and band cofounder Brendan Canning had a mouth on him too. ‘Wow, the Freebird joke still gets laughs,’ he said smiling after a slew of audience requests.

Broken Social Scene was unpredictable, stopping and starting the instrumental, horn-heavy ‘Meet Me in the Basement’ three times, in what felt like a grand finale, to only follow it with more, including a cover of Modest Mouse’s ‘The World at Large.’ The real finale came with the band’s founders taking the stage alone: Drew on drums, Canning on guitar, in a fun, unbridled jam.

Big Band in the Little City