Home Sections Sports Big Is In 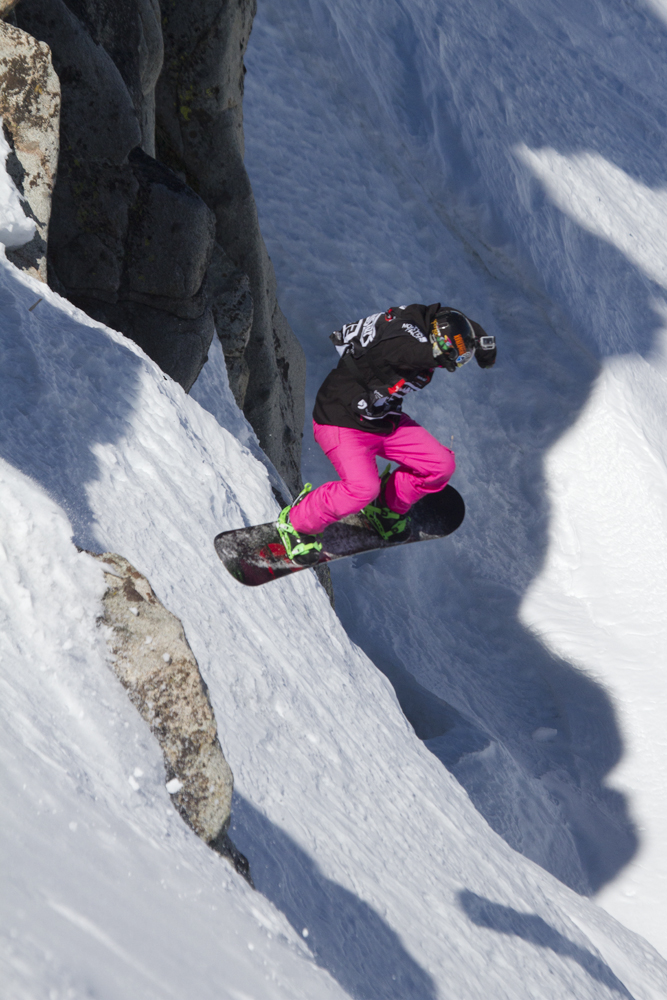 The Frenchman Xavier de Le Rue drops into the steeps of Silverado Basin almost directly under the Squaw Valley tram cables. He negotiates a double-stage cliff section, followed by high-speed turns through the trees. He then rides parallel to a cliff band with fall-and-die consequence but hammers hard turns near its edge, tossing slough off the rock like a dusty, white waterfall before hucking a 50-foot cliff. The landing is pristine save for a few visible rocks, and he lands inches from sharp granite, forcing him to ride out switch in an attempt to avoid them. He finishes first place in the 2010 Freeride World Tour event, earning $8,000 for the day and further cementing his status as one of the top big-mountain snowboarders.

Lines like these are yearly occurrences in Tahoe, which boasts the premier big mountain competitive scene. From entry-level junior comps to the highest level of professional competition, the Basin has it on offer. The combination of terrain, location, and the fostering of future talent positions the area as a nationwide leader. And with a cadre of local organizers, coaches, and athletes pushing the scene forward, big-mountain competitions are only growing. The next generation could likely add to past and present big-mountain champions such as Shane McConkey, Jeremy Jones, the Backstroms, Jackie Paaso, Josh Daiek, and Sammy Luebke.

For those who have never seen or are unfamiliar with big-mountain competitions (also called freeride or extreme events), the format is simple yet cutthroat. Organizers pick a venue that is steep and full of features (the Cirque at Kirkwood, or Silverado and the C-2 towers at Squaw Valley), and no alterations are made outside of avalanche control. Riders are given creative control to pick their own lines and rip, drop, and hopefully stomp their way down. Exact judging criteria vary among organizational bodies, but the general principles of speed, control, fluidity, air, and line selection are paramount. The influence of freestyle trickery grows by the year as judges award big points for flips and spins, which help spark interest from the younger generation.

This year, athletes as young as 11 and up to their late 30s will compete in front of large crowds and be webcast across the world. For 2014 there will be six events in Tahoe on the junior circuit alone; 10 years ago there was only one in the U.S., at Crested Butte.

But it took decades to get to this level of exposure. Classic events such as Xtreme Verbier in Switzerland and the King of the Hill in Alaska sparked the movement in the ’90s. In 1996, McConkey established the International Freeskiing Association (IFSA), which helped promote these freeriding events as legitimate competitions, as they were often showcased alongside the more traditional disciplines. Over the years, big-mountain comps gained and lost momentum, but Tahoe has remained at the forefront.

“Over the last 10 or so seasons a big resurgence in interest in mountain riding began … now there are mountain teams at resorts that are training kids to freeride and feeding the system,” said Tom Burt, Tahoe local, snowboarding freeride legend, and head judge of the Freeride World Tour. “Plus, the Tahoe area has many venues at Kirkwood, Squaw, Alpine, and Sugar Bowl that can fit different levels of competition and thus is one of the premier areas for comps in the U.S.”
Tahoe’s snowpack is also ideal for hosting big-mountain competitions.

“Because the general snow conditions [are] a maritime type of snow that sticks to the steeps, it allows for safer conditions at these resorts,” said Burt. “And generally lower avalanche conditions leads to being able to host more events.”

For 2013-14, there are about 10 events in Tahoe. The IFSA (now called the International Freeskiers & Snowboarders Association) sanctions three regional and two national events, the Subaru Freeride Series holds two events, and the Freeride World Tour (FWT) has chosen Kirkwood as its only U.S. stop and offers a junior event at Squaw. A few independent contests also take place.

The inclusion of the FWT stop at Kirkwood demonstrates the region as a world-class location. The FWT only has one stop in the U.S., and these events are considered the highest level of freeriding in terms of the venues they offer and talent on the roster.

“The Cirque is one of my favorite venues and is a legitimate venue on the world stage,” said Trevor Tanhoff, a former competitor on the FWT and now the head freeride coach at Sugar Bowl Ski Team and Academy. “It’s big, intimidating, and has lots of options and has filtered out the best athletes year in and out. A major reason that the FWT returns every year is due to not only the terrain itself, but the ease of spectating and creating exposure to a broader population beyond those just in the competition.”

Looking to the junior demographic, it seems the sky is the limit.

“There are more junior athletes in Tahoe this year than any other year. It really seems to have caught on,” said Cathy Howard, an IFSA board member. “We are looking to add more events, possibly at Kirkwood or Mt. Rose, to make room for the increased demand.”

There are about 120 kids that are slated to compete on competitive teams at either Squaw, Alpine, or Sugar Bowl. In addition, there are nearly 500 kids at the same mountains that are on non-comp teams that train in the big-mountain discipline.

“Tahoe is like an incubator for freeskiing,” said Scott Mahoney, IFSA president. “The structure and breadth of the freeride programs that are available in Tahoe are ahead of the curve compared to other regions. These programs allows young kids to progress in a number of disciplines, and increasingly they are more interested in big-mountain style riding.”

The big-mountain arena provides a raw element of skiing that isn’t found in racing gates or lapping a halfpipe.

“The sport itself is a welcome new option from ski racing or even slopestyle,” said Sugar Bowl’s Tanhoff. “Big-mountain skiing is free from a lot of limitations and allows for someone to show their style on a large canvas. Also, the sport’s improving structure has allowed for less skepticism about its legitimacy.”

Additionally, in 2012-13 the IFSA added snowboarding to the regional events and are stepping up to national events this year. This is significant since boarders under age 18 originally had few, if any, big-mountain events to enter, and young riders now have exposure to a contest scene outside of park, pipe, and rail events.

The preparation is now on par with that of promising young ski racers.

“Many of my athletes train every day. Whether at Sugar Bowl, Boreal, or Woodward, they don’t stop,” said Tanhoff.  “My athletes and families are invested so deeply because this sport supports and fosters sportsmanship, dedication, and a tremendous amount of camaraderie. Tahoe’s big-mountain scene is paramount to the national picture.”

With the ample amount of events on offer, it is recommended to see it live, whether it’s the European-infused FWT stop at Kirkwood or middle-schoolers ripping at Sugar Bowl.

“The fact that this area’s athletes are mostly in the younger age categories means that the Tahoe region will be pertinent for years to come,” said Tanhoff.