Home Columns Kids Connect Beating to His Own Drum 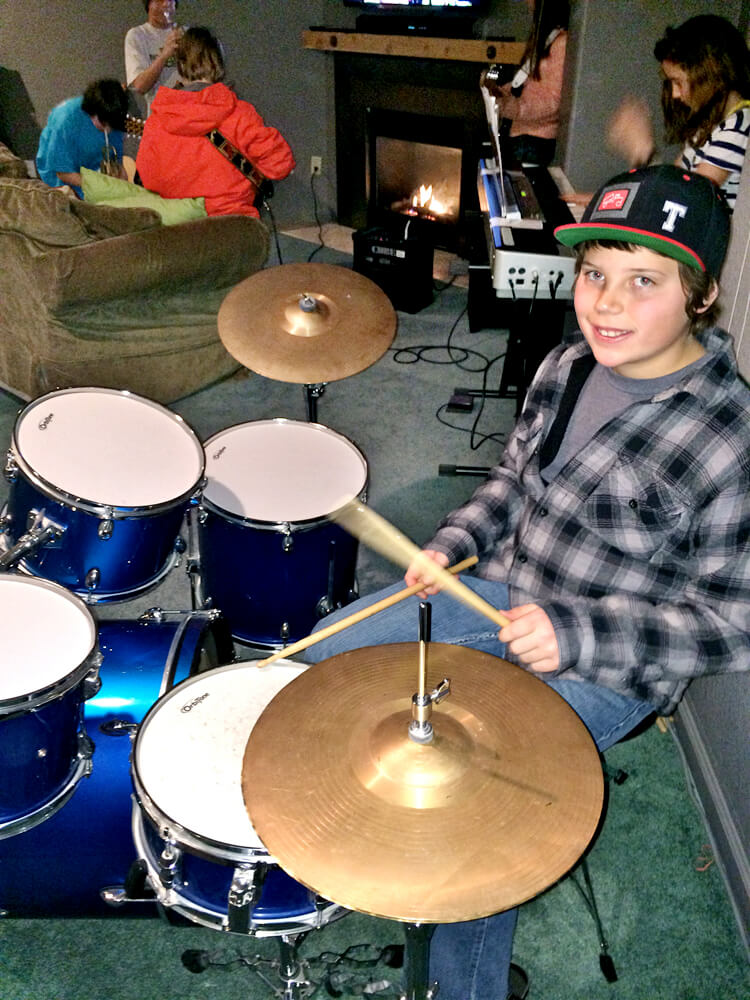 “I don’t remember life without music,” says Eric Spillman, 11, a Truckee kid and sixth-grader at Creekside Cooperative. He’s pretty sure that when his mom was pregnant, someone pounded on her belly because ever since he was born, he’s been drumming.

Now, Eric’s on his third real drum set but it’s not in the kitchen anymore; it’s in the living room and looks to be twice as big as the fireplace. That shows how much Eric’s parents support his music. It’s not easy to relax with tea or a book when Eric’s pounding on drums.

Eric laughs describing how his family tells him when they’ve had enough: his mom drags her pointer finger across her throat and his sister, Emma, 10, whines, “Errrriccc, you’re soooo annnooyyying!” His dad, Todd, just sits on the couch until a really loud rock beat comes on, then he leaves. “My dog’s chill with it, though,” Eric laughs. Soon, he’s going to learn how to play the flute. He thinks his family will be happy about that.

I met Eric when he sat in on a song my sister, Eleanore, and I were performing. Eleanore was rapping and I was playing piano and back-up vocals. Eric has a drummer personality. Eric says, “I’m a leader, but I can be quiet at first, kind of like many songs have an intro with hardly any drums and then you hear the beat come in stronger.”

Eric belongs behind drums. He just has to play. At home, he practices beats he’s learned from Moody’s Jazz Camp or his teacher, Steve Kershisnik of The Doghouse Music Studio in Glenshire, or he just jams.

The other day he begged Emma to sing just so he could give a beat. She sang “Rudolf the Red Nosed Reindeer.”

His teacher, Steve, loves playing with Eric. “He’s always been totally open to get his inner-drummer out,” Steve said. “His enthusiasm just does it for me.”

And that’s saying a lot because Steve, who loves how kids have “wide-eyed wonder at new things,” is an amazing and eager musician. He plays stand-up bass, drums, guitar, and keyboard, and plays in local bands like Quartet Minus One. He has also toured with people like Tom Jones, Warren Hill, and Donny Osmond.

Eric loves Steve because he’s more easy-going than most teachers. Steve is patient and shows instead of tells Eric how to do things. “He never says ‘No!’” Eric said.

Personally, my favorite teaching style is when teachers and coaches have confidence that I can watch them carefully and try what they do. If I do it wrong, they just show me again. Like Steve does.

After our interview, I asked Eric to teach me a drum beat. Eric was humble when he said, “I’ve never taught before.” But still, he acted like Steve: he made room for me to sit down on the bench; he showed me a simple beat (notice he didn’t tell me how to play it). Then he handed me sticks and watched me try. I did the first beat right but the second was harder and it took me two times to get it. Eric didn’t say, “No, that’s not right.” He stayed silent and just watched me until I got it.

Eric is a drummer, but really, he’s just a kid. And the best thing about kids is they don’t know what they’re doing next; they only know what they’re doing that second. For Eric, what he’s doing that second is drumming. He drums on the dashboard in his mom’s car with his fingers, pencils, or drumsticks. When he’s waiting for his teacher to help him on the computer, he taps beats on the space bar; his teacher is always telling him to stop drumming. He drums at the dinner table, too, especially when it’s Chinese night and he has chopsticks.

Eric finds time to do what he loves, always following his dad’s advice — “Any chance you get to play, take it.”

Beating to His Own Drum
Arts & Culture