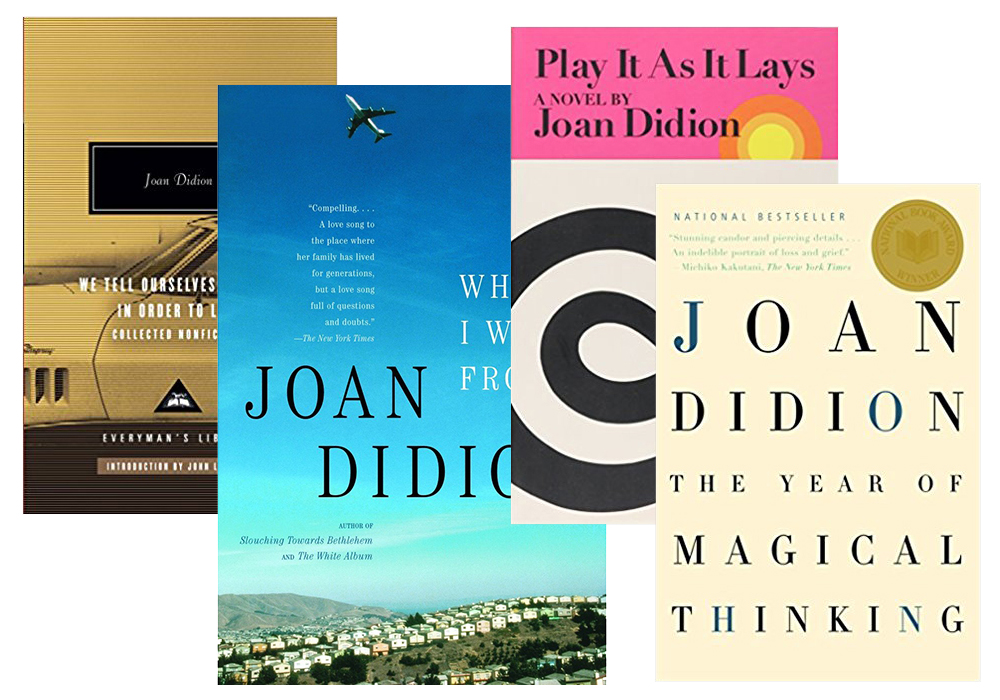 Literary icon Joan Didion is known for the brilliant prose of her essays, novels, and screenplays, and for the groundbreaking role she played in the evolution of “new journalism” in the mid-20th century. Hailing from Sacramento, she is also one of the great California native writers. Her family’s long history in the state informs her understanding of the American experience, lending to her indelible portraits of the Golden State during’ the 1960s and ’70s.

The title of Didion’s nonfiction collection, We Tell Ourselves Stories in Order to Live, reflects her belief that the words we use to describe ourselves define our place in a complex world. Didion’s writing depicts the evolution of her own identity, founded on her family’s origin story. As a fifth-generation descendant of California pioneers who traveled with the Donner Party and settled in Sacramento, Didion absorbed family stories and values that shaped not only her identity but also her view of California and its promise. Through her rich vignettes and sweeping narratives, Didion describes the evolution of her thoughts toward herself and the evolving state of California. She reflects on California’s cultural and political history, from the settling of the West to the present, examining themes that are just as relevant today.

Didion’s personal life trajectory from her early life in Sacramento through Berkeley, New York, and L.A. are revealed through her writing as well as in the comprehensive biography, The Last Love Song by Tracy Daughterty. A recent Netflix film produced by Didion’s nephew, actor Griffin Dunne, also provides an illuminating interview with Didion at 80 years old.

We Tell Ourselves Stories in Order to Live, Knopf, 2006

This compendium of seven nonfiction works by Didion includes essays written in the turbulent ’60s in Slouching Toward Bethlehem. The California Dreaming section incudes an inside view of the Haight-Ashbury counterculture in San Francisco and Joan Baez’s Carmel Valley Institute for the Study of Nonviolence, which was brought before the Monterey County Board of Supervisors for “violating the peace, morals, and general welfare of Monterey County.” There are also meditations on John Wayne, Howard Hughes, Alcatraz, and a sensational crime-noir starring a suburban housewife in San Bernardino Valley.

The Year of Magical Thinking, Knopf, 2005

This memoir is Didion’s powerful account of her life in the year following the simultaneous death of her husband and the grave illness of her 39-year-old daughter, Quintana Roo. It is a meditation on life: love, death, and the struggle to keep the ones we love safe. While incredibly personal, it speaks to all. It received the National Book Award and was short-listed for the Pulitzer Prize.

The essays in this collection depict Didion’s ongoing struggle to square the California mythology with which she was raised, with the factual California history she wrote about throughout her career. The foundational image of the noble and self-made Californian is contrasted with the early and ongoing federal subsidies that sustained Californians, beginning with land grants to pioneers, massive federal funding for waterways, railroads, oil, wheat, aerospace, and the industrial military complex. Didion is profoundly haunted by conflict of nostalgia with evolving insights.

This highly researched work provides a chronological study of Didion’s life and work and is an insightful complement to Didion’s writing, filling in the details and context which better explain her life. Including Didion’s own prose, research documents at the Bancroft library, and interviews with those who know her, this is a great read for Didion fans.

Didion’s life in L.A. included a social circle of the Hollywood elite and their hangers-on, and gave her unique insight into the Hollywood subculture. The main character of this novel, Maria Wyeth, is a Hollywood starlet in her early 30s, damaged and drifting in amoral landscapes of Hollywood and Las Vegas. The spare yet evocative and stunning prose tracks the downhill slide of Maria and those around her. Didion and her husband, John Gregory Dunne, turned this novel into a screenplay, one of many they wrote, adapted, or doctored in their careers.

Ruth is a member of Friends of the Truckee Library, which is a nonprofit organization dedicated to promoting and supporting the Truckee Library as an essential civic institution. The group is advocating for the libraray to be operated by the Town of Truckee, and is planning for a new 21st Century facility. For information on how to get involved, email fotl.org.

We Tell Ourselves Stories in Order to Live
Business
6:00 pm

We Tell Ourselves Stories in Order to Live
Music
6:00 pm

We Tell Ourselves Stories in Order to Live
Music
12:00 am

We Tell Ourselves Stories in Order to Live
Sports & Outdoors / Wellness