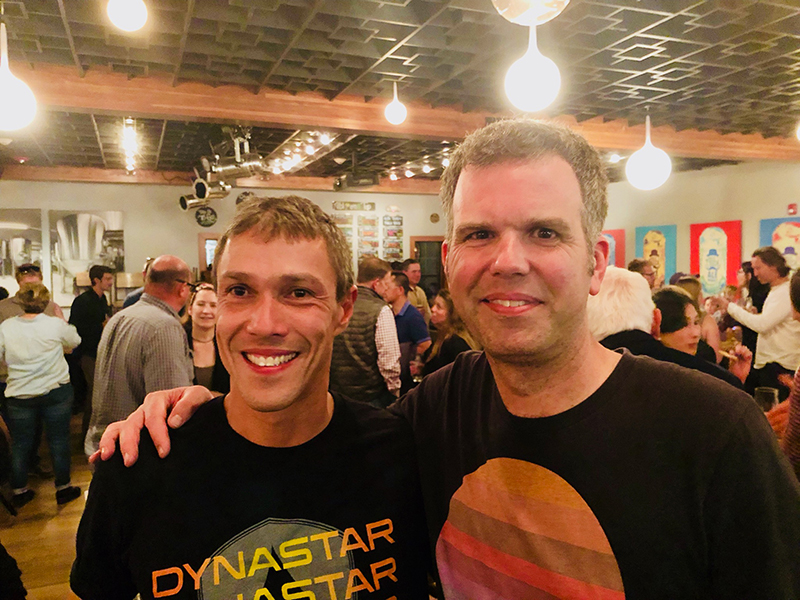 A Tale of Two Bikers

When Aaron Breitbard went out to Alder Creek for a 45-minute solo mountain bike ride on Sept. 21, it was to clear his head and prepare for his upcoming yearly pilgrimage to Burning Man. He’d been working hard to contribute toward Transcendent Souls, a sculpture for which he and his 13-year-old daughter had built a heart formation in 2017, and then added to in 2018. (See our Parting Shot for a photo of Transcendent Souls.)

In the days leading up to the ride, Breitbard’s cat had disappeared. The experience was a test of that very heart he’d been working to represent; and he was about to find that heart tested again. As Breitbard rounded a familiar corner along the trail, he saw a body and bike laying on the ground about 20 feet down the trail.

It was John Biebl. Finding the man’s bike knocked over nearby, he assumed the unconscious Biebl had crashed and hit his head. In the ensuing minutes, Breitbard cleared vomit from the mouth of Biebl — who had begun to choke — assessed his vital signs, and called 911. Biebl’s arms flopped around and he drifted in and out of consciousness, but at one point was able to recite his wife’s phone number so Breitbard could let her know.

Biebl’s wife Sarah Poynter hurried down, where she met her husband and the paramedics at the trailhead, as well as Scout, their puppy, who had sat obediently by Biebl’s side the whole time. By that time, he was able to walk with assistance, but continued on to the hospital for tests.

At the hospital Biebl recalled that he had been stung by something on the ride, which a mark on his neck confirmed, and had sat down prior to blacking out. Doctors assumed he had gone into anaphylactic shock, however, it isn’t typical for survivors to come-to or recover as quickly as had Biebl. They performed every relevant test they could think of, including respiratory and cardiovascular examinations, but could find not a single thing wrong with him.

Upon the Breitbards’ return from Burning Man, the couples reunited at Alibi Ale Works and discovered that Poynter had taught the Breitbards’ daughter at Sierra Expeditionary Learning School. It also turned out that during the rescue, the family’s missing cat had returned home. For Breitbard, in retrospect, the whole experience had been the perfect way to gear up for Burning Man, where selfless acts of service are paramount. But most of all, for both families, it was a reminder to appreciate what we have in life.

The ordeal won’t stop either man from biking, and both say they’re back on the trails. “On my deathbed, I won’t be there regretting that I was on my bike too much,” said Biebl.

The Woman Who Thrives

Thirty-three is around the age when most people begin to blossom into true adulthood. They start families, raise children, and build careers, appreciating the beauty a lifetime on Earth presents us. Instead of relishing in the milestones this life has to offer, Courtney Thurmon is fighting the battle of her life against stage IV breast cancer. Yet, somehow, this intelligent young woman manages to remain positive and bright.

Despite having had a double mastectomy, it was discovered that the cancer had already spread into her breastbone. This causes her to have trouble moving, breathing, and laughing, and if she gets a cold, it’s excruciating to cough. Thurmon’s life expectancy was once estimated at three years or less. That’s only three more years to laugh, to smile, and to say thank you, as she does, every day, every time someone helps her in any way. But, Courtney doesn’t believe in the word “terminal,” and believes that with attentive care and maintenance, there is no limit to her life expectancy at this time. She’s active with promoting breast cancer awareness, and remains an open book to any and all questions regarding her disease.

Thurmon refuses to let her prognosis get in the way of living her life to the fullest it can still be. She was in school until last fall, continuing to pursue a graduate degree in special education, and has been working as much as her schedule allows. But, cancer treatment stifled her educational progress and her costly medical care has also greatly impacted her ability to succeed in Tahoe.

Though she receives Social Security Disability Insurance, Thurmon does not qualify for other assistance because it’s considered “income.” She’s had trouble finding a place to live, but needs to live on her own, as she is often sick — whether it be from medication, stress, or too much activity — and does not feel comfortable living with other people.

Her story speaks to the current system of care, which does not well serve people in Thurmon’s situation, particularly in terms of medical insurance and meeting basic needs. She has considered moving, but her treatment team is here in Truckee, and it would be far too stressful to relocate and find new physicians.

Thurmon’s story was originally shared with Moonshine through Kimball Pier, who created Sierra Agape Therapeutic Services in 2010. Pier’s vision was to create a place that offered a range of holistic therapeutic services on a sliding fee basis; making healing affordable and available for people like Thurmon. Sierra Agape has developed a unique system to help people in the community in need, allowing a landing place for the public to safely donate through a 501c3 nonprofit. This also helps the recipients use those funds for housing or living costs, without affecting their income, which can limit their ability to receive SSDI.

To help, donations for Courtney Thurmon are currently being accepted by visiting sierraagape.org. Sierra Agape’s sliding fee treatment options are based on the Buddhist philosophy of “dana” or commitment to generosity.