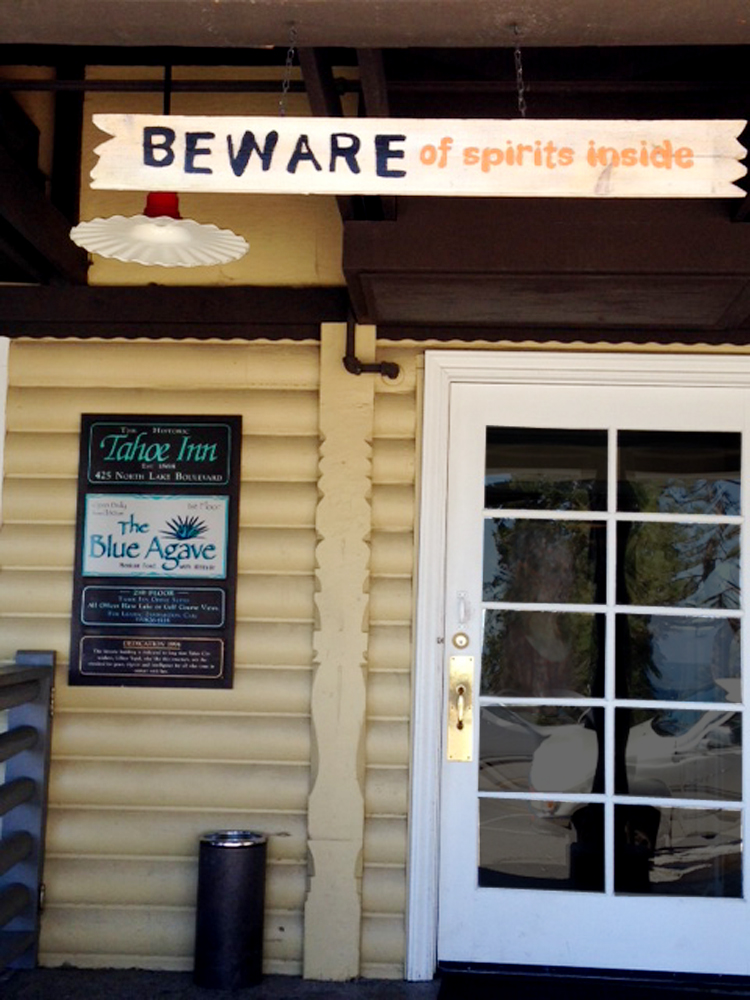 ‘Tis the season for ghosts and goblins and there is no shortage of creepy stories at The Tahoe Inn, home of the Blue Agave restaurant in Tahoe City. The sign over the entrance that reads “Beware of Spirits Inside” portends not only the largest selection of tequilas at the lake, but the friendly ghosts that reside at the inn.

“Our spirits are very friendly. They are always watching over us,” says Steve Topol, owner of The Tahoe Inn and the Blue Agave restaurant. The kitchen staff tells of “someone” regularly hovering over their shoulders as they prep in the morning.  Kelly, the restaurant manager, says sometimes she has “company” when she’s closing. “There’s this warm friendly presence even when I know there’s no one else around. They’ve even walked me to the door as I lock up. At first it was creepy, but now I kinda like it.”

The upstairs office tenants report of hearing creaking bedsprings and whispers in the hall. The long-gone hotel desk bell occasionally dings as a spirit calls for attention. Both are reminders of The Tahoe Inn’s former life and insights into its ghost stories. Originally the home of the Bliss family, builders of Tahoe Tavern and the Truckee-to-Tahoe City railroad, the house was bought by Constable Watson and Pop Bechdolt in the early 1900s. They operated it as a hotel and bar that would eventually become The Tahoe Inn.The inn burned to the ground in the spring of 1934. With an army of 100-plus workers, it was rebuilt in two months with rock and petrified wood harvested from Emerald Bay waters, the new cornerstone laid for a Fourth of July opening in time for the tourist season that year.  It was constructed on land with a high water table. In a wet season an actual spring coursed through the dirt floor basement, the sound of dripping water adding an eerie ambiance right from the beginning of the inn.

The basement was divided into stalls with barn-door style garage doors for guests’ cars. Tahoe City didn’t have a mortician in those days, so when snow closed the roads, the unheated stalls came in handy. Bodies were stored in the basement garages, nicely frozen, until the deceased could be shipped to the closest mortuary in the spring. Perhaps some souls decided to stay behind.

Becoming an increasingly seedy hotel throughout the ’50s and ’60s, rooms went for $1.50 to $2.50 a night, or 50 cents with your own sleeping bag; a “no hippies allowed” sign was posted in the lobby.  (Even then there were reports of whispering ghosts, but for that price no one complained.)

Then in 1974, Peter Topol bought The Tahoe Inn with ideas of developing a retail center and thoughts of a steak house. A deal was struck with the nationally famous Victoria Station, and the railroad car attachment soon followed. Vic Station Tahoe City took over the inn that became the main training center for its entire national staff who worked in the restaurant and lived upstairs. The ghosts visited the trainees day and night; once their six weeks were up they couldn’t leave fast enough. Peter’s brother, Steve Topol, took over ownership of the inn in 1994. “I inherited a nightmare on Elm Street setting complete with broken windows, bats in the attic (lots of bats), dark paneling everywhere, a single, dangling light bulb in the upstairs hallway, leaking, banging plumbing, a collection of exposed-spring mattresses, broken furniture and old stuff, the dirt floor basement, two stalwart tenants — and a lot of ghosts.”

Extensive renovations in preparation for Steve’s first restaurant, MiCasa, Too, however, seemed to make the ghosts even more comfortable. “I didn’t put much stock in the ghosts stories at the inn,” said Steve, “until I started working in the building. One night I closed the MiCasa bar around midnight and routinely went down to the basement office. All the lights went out. It was pitch black and I got lost in the dark. I was crawling around on my hands and knees on the cold, wet dirt floor completely disoriented, panicky, looking for the way out. A flash of light appeared in the distance — where there was no light bulb — and guided me to the exit.”

The basement floor is now sealed, cemented, and tiled over. But many of the restaurant staffers refuse to venture there, claiming that there are “too many spirits watching.” Paving the floor helped a little, although staff explained, “it’s a nicer environment, but paving didn’t get of rid the ghosts.”

“Our ghosts are very busy,” quips Noe Vasquez, Steve’s assistant, “you can see them whizzing around out of the corner of your eye, any time of the day.  The restaurant patrons see them too.  The spirits check to be sure they are enjoying the food. ”

The Tahoe Inn: Beware of Spirits Inside
Music
6:00 pm

The Tahoe Inn: Beware of Spirits Inside
Music
6:00 pm

The Tahoe Inn: Beware of Spirits Inside
Music