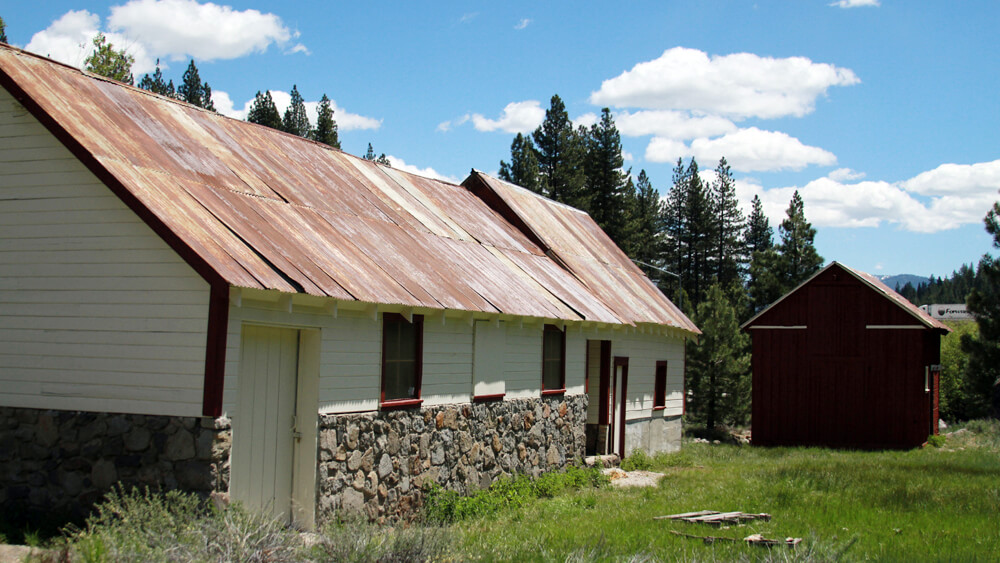 Before Truckee became home to some of the world’s greatest skiers, it was home to the best butter on the West Coast. The hills of Truckee were covered in sheep, cattle, and dairy farms, making this town an agricultural mecca.

Most families on the West Coast had Truckee butter on their dinner table in the late 1880s. There were 15 to 20 dairy farms that produced 60,000 pounds of butter a year. Truckee was a perfect place to graze cattle due to the lush mountain grass and cool summer nights.

One of the last standing remnants of that legacy are the McIver Dairy Farm barns, which are next to what has become known as Sledding Hill on Donner Pass Road (the little building that’s more visible from the road is the pump house). In honor of Truckee’s 20th anniversary of incorporation, the historic buildings are going to be spruced up with fresh paint and will be ordained with an interpretive sign as a Town Council project.

The old barns haven’t had a facelift since 1999, when the Contractors Association of Truckee Tahoe (CATT) painted them and installed both new windows and the original barn door, which was discovered in the woods. Once again, CATT is financing the project with grant money donated to the town. Kelly Brothers is doing the painting for free with paint donated by Kelly-Moore Paints.

Students at Sierra Expeditionary Learning School researched and wrote the text for the interpretive sign, which will be a historic stop along the route of the Highway 40 Scenic Bypass Project. Also helping to make this possible will be the Truckee Rotary, the Truckee Donner Historical Society, the Donner Summit Historical Society, MD Construction, and Root of Design Electric. Villager Nursery, which is located directly across the street from the barns, adopted the creek behind them and has planted native plants.

The owners of the McIvers dairy farm were Jim Sr. and Sara Elliot McIver who were originally from Floriston, moving to Truckee in 1891. One of their children, Jim Jr., would become a Truckee icon. A jack of all trades, Jim Jr. owned a blacksmith shop, which he converted into an automobile shop when cars were introduced. This garage was downtown right in the middle of the current Donner Pass Road between what is today Moody’s Bistro, Bar and Beats and the Truckee Beacon.

Jim Jr. was also a contractor and the local mailman. He attached round barrels to a tractor and pulled a sled from Truckee to Tahoe City to deliver the mail year-round. One year, a Tahoe City resident called the United States Post Office to complain that the mail had been late all winter. When officials came out and went on the route along with Jim Jr. they realized how treacherous the route was and concluded he could be late all he wanted. Jim Jr. had a love for horses and made the horse-drawn sleighs for Truckee’s Winter Carnival. This love for horses would later get the Truckee rodeo grounds named after him.

The dairy farm ceased operation in 1944, when Sara grew ill. It seems that she did a lot of the work on the farm, so without her the farm would have been hard to run. Jim Jr. passed away in 1965, and his wife Victoria “Azad” in 2004. Both are buried in the Truckee Cemetery.

The McIver Dairy Farm was not the only farm in the area. Some other well known farms were the Von Flue, which was on South River Street; Euers which was a dairy and meat farm; Joergers, located in Martis Valley and was the last one to close in the area; and the Kearneys, who were chicken farmers.

The chickens stayed in Truckee all year, which made the harsh winters a lot of work for the Kearneys. They had to constantly check on the temperatures in the chicken coops, which contained 3,000 to 4,000 birds.

In the winter, many of the cattle would be sent to the Folsom area by train and then more would come up for the summer season to enjoy the mountain qualities. From June to October, the town would be covered with 75,000 to 100,000 head of sheep, according to “Edwards Tourist Guide and Directory” of 1883.

For many years, the Basque would move cattle through the Stampede area with llamas and donkeys to guard the herd. In the late ’70s sometimes the herd would wander into the Glenshire area, and the sheriff dispatcher would receive calls from people concerned about the sheep and llamas in their yard.

The tradition lives on even today as Basque cowboys and others move their cattle across the range that stretches from the Sardine Valley above Stampede to the high alpine meadows around Weber Lake.