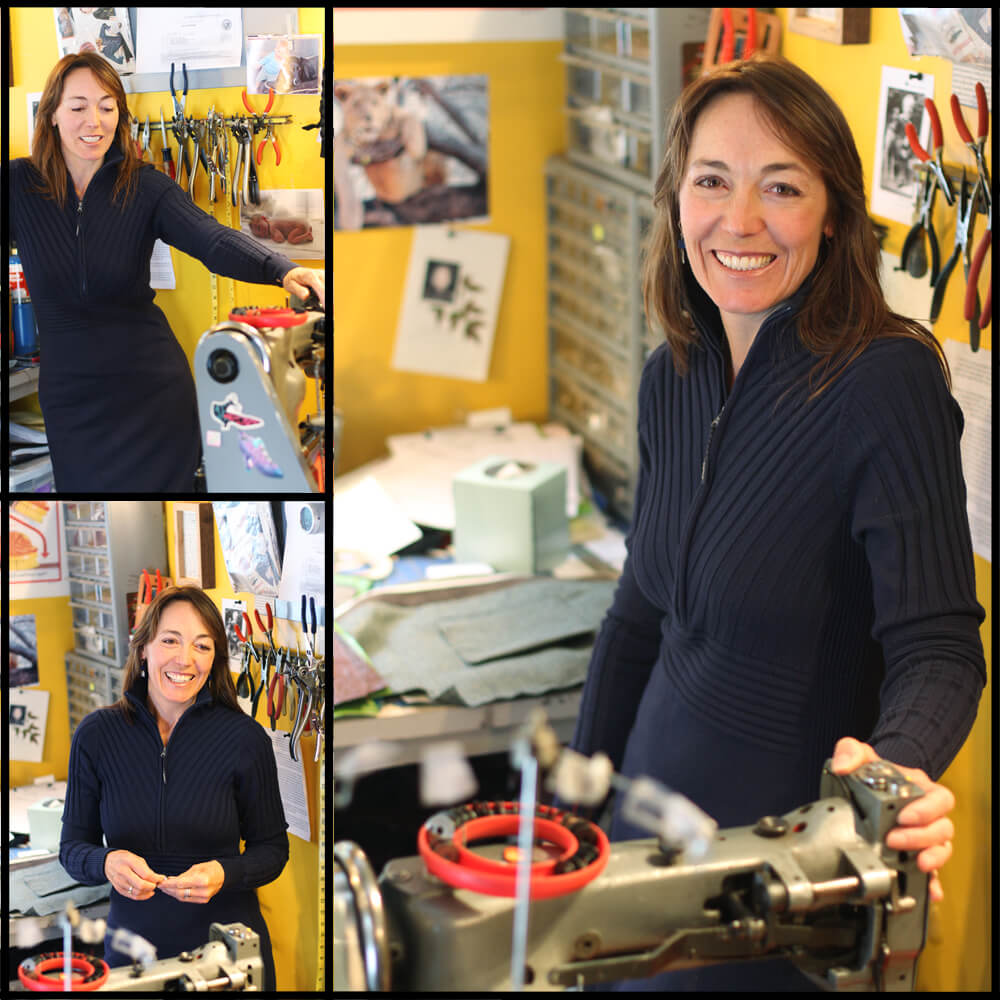 The Tahoe life runs thick in Kahlil Johnson’s blood. Her father, Russ, has had a family home at Speedboat Beach since the 1940s. Kahlil and her parents moved to Truckee from Marin County in 1981 after sailing for four years around the South Pacific. Russ worked at Squaw Valley for 18 years as a ski patroller and avalanche forecaster, and her mother, Lorraine, taught skiing. Her younger brother, C.R., was born in Truckee and was a professional freeskier and X Games medalist who died at age 26 in a tragic ski accident at Squaw in 2010.

Kahlil, 45, joined Riverside Studios artist’s co-op in 2003, now located on Commercial Row in downtown Truckee. She considers her embossed leather handbags “as functional, with a flair for fashion.” She is most known for her Cleopatra wallets and LaLa bags that clasp in front. Kahlil, who was named after the famous Lebanese-American poet Kahlil Gibran, works in a shed behind her house when her son, Thomas, who is almost 3, is at daycare. Thomas, an aspiring leather worker himself, has his own workbench.

Moonshine Ink: What is the magic nut that keeps you here in Truckee? Kahlil Johnson: Everything, especially after visiting Santa Cruz recently. It’s so aggressive. I went to college there, stayed for 17 years, and moved back to Truckee to be near my family. After a year in New York, I was ready to be in a tight-knit community and Santa Cruz wasn’t that for me anymore.

MI: Did you learn your leather-making skills in Santa Cruz? KJ: I did, from a neat lady I studied aikido with who was a shoe master, Gaza Bowen. I apprenticed with her for four years. In August of 2001, I went to New York and worked for a footwear design company in the Bronx. I would ride my mountain bike across the west side of New York, through Central Park to Harlem, and ride across the Madison Avenue Bridge. At night, I audited handbag-making classes at the Fashion Institute of Technology.

MI: How did you muster up the courage to ride your bike to the Bronx? KJ: To me it was safer than riding the subway. My brother C.R. was sponsored by Spyder clothing and he ended up with a reversible gorilla jacket. I would wear it gorilla side out so I looked like I was about 250 pounds. No one messed with me. Besides, I’ve studied aikido for 25 years so I felt very confident.

MI: What was it like as a young child to travel the South Pacific for four years? And what kind of boat was it? KJ: It was a Hinckley Bermuda 40-foot yawl. I was 7 when my parents and I left the Bay Area and 11 when we came back. My parents had adventurous spirits. We sailed all around the South Pacific. Four years with no refrigerator, no navigation, no ham radio. My dad did all his navigation on the sextant and the stars. I was homeschooled and learned the customs of each island. I would jump right into the local school for a week, and then we’d be off.

MI: I know your brother C.R.’s death affected you greatly. Could you talk about that a little? KJ: After my brother had his ski accident at the end of ’05, we lived together so I could help him normalize. His whole take on life changed. He really believed in what he was doing. He loved skiing. When C.R. passed away in 2010, he was in the best possible place a human could be in before they die. High Fives does such a great job running the C.R. Johnson Healing Center that they don’t need me to mettle in it. Death is a tricky one. As a culture we don’t know how to deal with death and how to process it. Having Thomas really helps.

MI: It sounds like with all the support and love you’ve received here, you’ll be sticking around. KJ: I love my life. I love this community. We really stand up for each other and we believe in each other. That’s why I can’t imagine living anywhere else.

Kahlil recommended Pam and Dale Chamblin, staunch proponents of community service, for the next Tahoe Stories.

Kahlil Johnson: At Home in Truckee