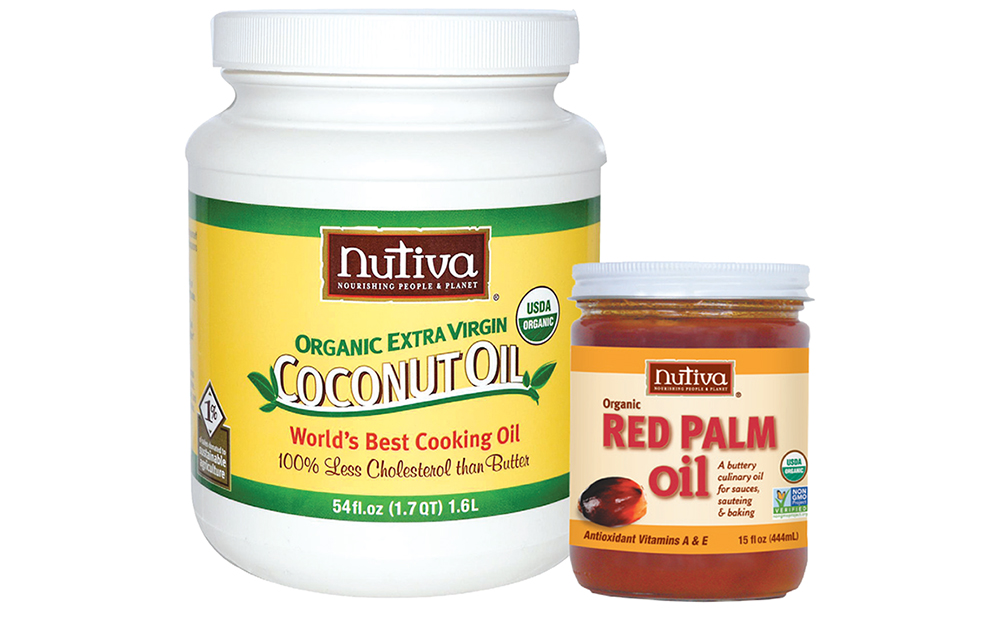 When it comes to health claims, nothing raises my suspicion faster than the word “miracle.” But the word pops up everywhere in reference to tropical oils that were long considered too high in saturated fat to be healthy, but are lately making a comeback.

Steering clear of Internet health blogs and going straight to the research, I discovered that coconut and palm oil show promising results in a number of areas, but not all experts are in agreement and more research needs to be done. Also, the saturated fats in tropical oils differ greatly from those found in animal fat, and that is where they may confer benefits. It’s also where things get complicated.

The three main tropical oils on the market are palm kernel oil, palm oil, and coconut oil. These can be semi-solid or liquid, depending on room temperature. Because they come from plants, they don’t contain cholesterol. However, the oil’s processing method is critical because some refining methods strip the oils of their beneficial qualities.

Palm kernel oil is 81 percent saturated fat. It’s inexpensive, has a long shelf life, and is stable at high heat, making it desirable for food manufacturers. Palm kernel oil is often fractionated, a process that increases its saturated fat and solidity, allowing it to substitute easily for trans fat in energy bars, cookies, and other processed foods.

Although palm kernel oil contains the medium-chain lauric acid, which may have antifungal and antiviral properties, it seems to affect lipid profile less favorably than the other tropical oils. One example is an African study on rats, which found that palm kernel oil raised cholesterol, triglycerides, and bad LDL more than coconut oil.

Red palm oil is about 45 percent saturated fat and contains more than 10 carotenes (hence its bright carrot-like color) as well as vitamin E. But the oil only retains its color and nutrients if extracted using non-chemical methods. In much of the world, red palm oil is refined, oxidized, bleached, and deodorized, stripping it of its carotenes and vitamins, which then goes by the name palm oil. The USDA and World Health Organization say that palm oil increases the risk of cardiovascular disease. But it’s impossible to know if they’re referring only to chemically refined, oxidized palm oil, because the research on red palm oil shows something quite different.

A review of research by the British Journal of Biomedical Science found that despite red palm oil’s high level of saturated fat, it reduced the risk of atherosclerosis and thrombosis (blood clots), lowered blood pressure, and improved immune function. Two other reviews concluded that although red palm oil can increase blood levels of cholesterol, it also causes endogenous (the body’s own) production of cholesterol to drop. Researchers believe red palm oil’s high carotene content and particular form of vitamin E are responsible for many of these benefits. Red palm oil can be added to sauces, stews, veggies, grains, and drizzled over popcorn.

Coconut oil comes from the coconut palm, Cocos nucifera, and is extracted from the white meat of the coconut. Coconut oil is about 86 percent saturated fat, higher than just about any other plant oil.

The research on coconut oil is diverse and promising. The University of South Florida is currently studying the effects of the oil on Alzheimer’s patients. The lead physician secured funding for the study after noting that her husband’s Alzheimer’s symptoms improved radically after ingesting four teaspoons of coconut oil daily. Researchers believe that the oil’s medium-chain fatty acids provide the brain with an alternative fuel that regenerates nerves. Results should be out this fall. In another study, cortical neurons treated in vitro with beta-amyloid (a component of the plaque associated with Alzheimer’s) had better survival rates when also treated with virgin coconut oil.

In India, a study found that rats fed virgin coconut oil had significantly lower levels of total cholesterol, bad LDL, and triglycerides, while levels of good HDL cholesterol increased. And in 2009, the journal Lipids published a study that found that women who were given about two tablespoons of coconut oil daily for 12 weeks had improved HDL levels and reductions in waist circumference.

Coconut oil can be used in baking, medium-heat frying, added to smoothies, or drizzled over salads. Be sure to choose “virgin” coconut oil, which is cold-pressed and retains the oil in a pure state. Non-virgin coconut oil is refined, bleached, and deodorized using heat and harsh chemicals.

Before you swap out all your cooking oils for tropical oils, remember that the research is young, and scientists still don’t understand much about how medium-chain fatty acids affect our lipid profiles.

And of course, don’t believe everything you read on the Internet, even when it sounds like a miracle.

~ Do you use tropical oils? Let us know below.