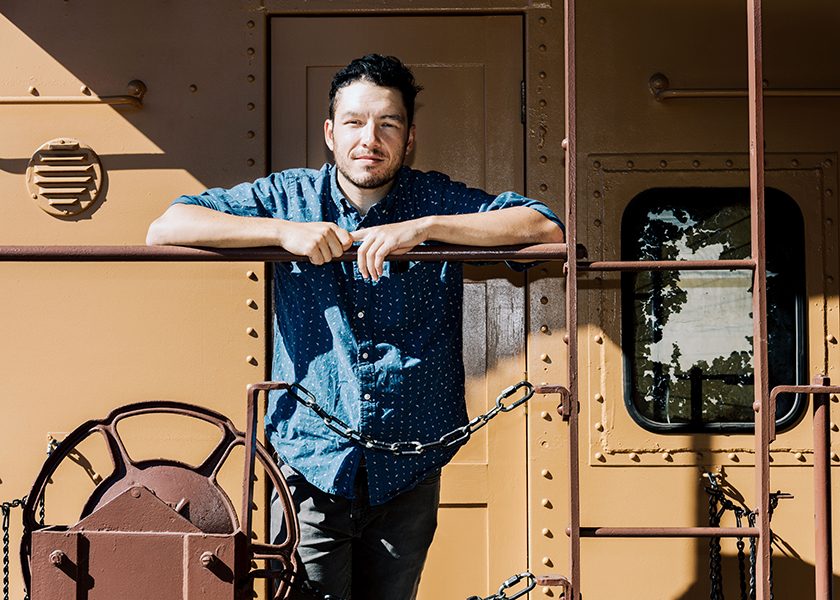 Cayman Levonian sits on a bench in old town Truckee. Remnants of days gone by scatter the landscape of the downtown area around him.

Just beyond where he’s seated is the old red railcar housing the Truckee Railroad Museum and bearing the markings of the Southern Pacific Railroad. Cayman, a 25-year-old Truckee native, readily shares that wireless giant Sprint was actually born of the acronym of the Southern Pacific Railroad International Network Telecommunications. It is just one of many historical tidbits Cayman has learned since becoming a writer for the annual Haunted Historical Tour.

While a number of the tour’s actors prefer to write their own scripts, not everyone has that knack. When the previous writer moved, event director Maria Jones set about finding a replacement. A mutual friend mentioned Cayman, who enjoys writing fiction. One thing led to another and he soon found himself scripting scenes for five of the seven stops on the tour last year.

“The entire concept of the Haunted Historical Tour is intimate and personal, and I know it’s my responsibility to give the actors something to work with that they can make their own in a limited space and time,” Cayman says of his role as writer. “If that means changing something significant in the script so that it flows better or will make the experience more enjoyable for the audience I’m all for it.”

Drawing inspiration from books on the early days of Truckee, Cayman found the recipe to weave some tall tales.

“Laughs come a little easier to me than scares, so I end up writing dark laughs,” he says. “If I can make the audience feel great, and a little guilty, for enjoying a scene as they’re watching it unfold I consider it a success.”

The most time-consuming part of the process, he admits, is not the writing but the vast amount of research required at the start of the process. He can compose a 10-minute script in one night, but the research starts in the months leading up to the event.

“I have drawn from actual historical events; last year I wrote about the night of Truckee’s first murder,” he says. “Some people would probably say that there’s no distinction between historical and haunted when it comes to Truckee’s past. I allow myself one or two ‘what ifs’ per scene but always try to use either a documented event, a real person, or a real location from Truckee’s past. Better yet, some combination of the three.”

Last year’s theme was loosely based on “underlying stories of Truckee” — with scenes featuring stories about the long-rumored tunnels under the downtown shopping area, according to Maria.

One piece by Cayman was set in the days of prohibition, depicting a couple of moonshiners moving their wares through the old tunnels below Sierra Sotheby’s on Donner Pass Road. Paranoid that something sinister was about to happen to them, the moonshiners projected just enough unease to make it compelling to watch even though Caymen really wanted to look away.

“I think involving the audience in the scenes has opened up some new opportunities for the tour,” says Cayman. “I’m pretty certain it was done before I started writing but I try to get the audience involved in some way in every scene, even if it’s just breaking the fourth wall and acknowledging that they’re there. I think it makes the tour feel more like a haunted landscape they are journeying through rather than a series of plays they are watching.”

With approximately 15 people in each group rotating through the tour stops, the size of the location can often add its own element to a scene. Such was the case of the tunnels, with tour guests packed in a dimly-lit, confined area and the actors successfully projecting their fear onto the visitors. Walking away from the setting as one actor helplessly cried out, “Don’t leave me here!” surely struck a nerve with some guests.

Location will likely add to the scene this year for those attendees finding themselves elbow-to-elbow in the Southern Pacific railcar. While details of the tour remain hushed in an effort to keep everything a surprise, Cayman is free to disclose that this year’s theme will highlight the 150th anniversary of the first passenger train passing through town.

Cayman, who now lives in Reno and works in digital marketing, has written three of the seven scenes for the upcoming tour. The remaining four include two musical acts and two parts written by the actors themselves.

Calling the tour “more historical than haunted,” Maria notes it is entirely run and created by volunteers of nonprofit Trails and Vistas, the organization’s sole fundraiser. A sell-out event every year, proceeds make possible the Dreaming Tree field trip to Sand Harbor for third grade classes from area schools.

So, how does it feel to see attendees react to what he has written?