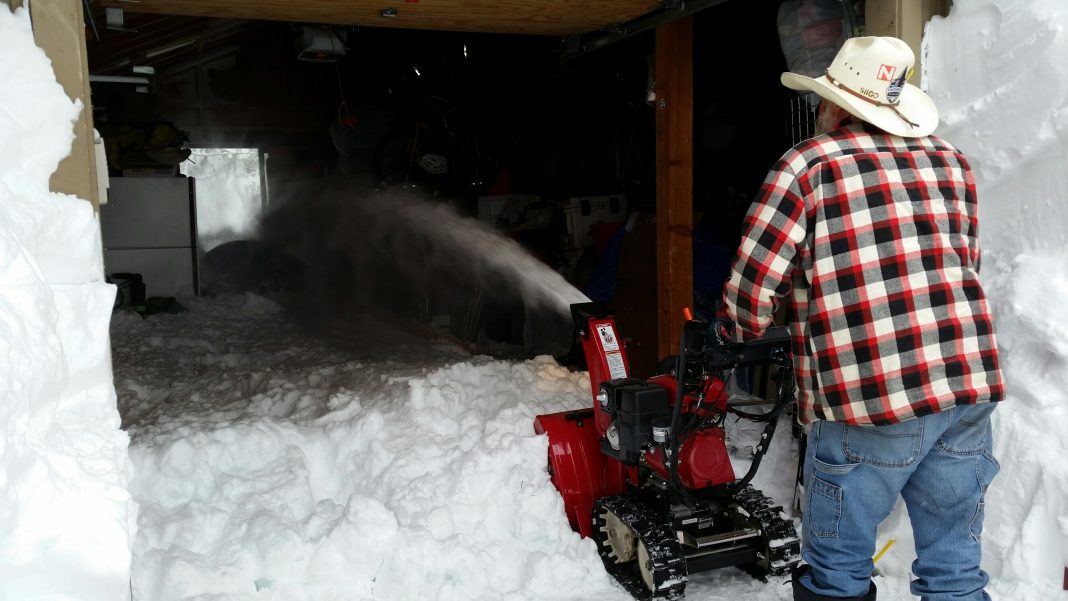 On the morning of Jan. 10, little did I know that by the end of the day I would have one of the most famous doorways in the country. But that’s what happened when an avalanche slammed into the front of our house, and the picture we took of our mudroom filled with snow went viral.

Welcome to life in an avalanche zone.

Living in Alpine Meadows’ Avalanche Zone is like living anywhere else in Tahoe, except when there is major snowfall. Then the mountainside across from our house, which separates Squaw Valley from Alpine Meadows, begins to look different. It begins to look ominous. I stare at it and pray: please be kind. Please be stable. Please don’t slide into our home.

People ask me why we chose to live here. We bought our house, which was built in the ‘60s, in 2004. As my husband and I like to say, we bought the last affordable house in Alpine Meadows that was not a total fixer-upper. Of course, we knew it was in an avalanche zone. What we did not know was how big the avalanches could get.

Living in an avalanche zone is both as scary as you think, and not as scary as you think. On the plus side, every slide that has hit our house has been a controlled slide. This means that we have warning, that we have time to prepare, that we are not loitering about the front of our house when all of a sudden a mountain of snow descends on us. We are fortunate that Alpine Meadows Ski Patrol, as contracted by Placer County, does its best to control avalanches on Alpine Meadows Road. They give us about an hour heads-up, which gives us time to enact our protocols. Since it is mainly our garage that is in the slide path (built in the 1980s right in the target zone, it amazes us that the garage was approved), we move our cars out of harms way, leave our garage door open about 2 feet, and open the sliding glass door in the back of the garage — installed after an avalanche in 2011 blew the back wall out by several feet — which allows the air blast to pass through instead of destroying the garage door. And then we take our kids to the bottom floor, and wait.

For the most part, I feel safe inside our house since it is mainly our garage and entryway that is in the slide path. After the 2011 avalanche — which was more destructive than this year’s, taking out several cars, filling our garage to the ceiling, and blasting our front door across the mudroom — my husband Steven built two protective walls in front of our house. One is an old steel sea wall he got from the Tahoe City Marina, which protects our actual house. The other wall, which stands in front of the right side of the garage, is made up of giant logs and steel girders. Both walls were tested for the first time this year, and they worked. The walls diffused the power of the slide, sending the snow up and over our house and, for the first time, hitting the neighbor’s house behind us (no damage, thankfully). Another first was that the avalanche knocked our other neighbor’s propane tank off its footing. The fire department had to red tag the tank, leaving our poor neighbors with no heat for the rest of the storm.

While we would love to see Gazex (which Squaw Valley installed on Headwall face in 2015) or snow fences, which are popular in Europe, erected on the hillside above us, these are expensive undertakings and the county is not interested in paying for them, at least for now. Hence, we had to take matters into our own hands and build the avalanche barriers, the most affordable option we could do on our own.

When we woke up on the morning of Jan. 10, after more than 2 feet of light snow piled on top of rain-affected snow, we knew there was a strong chance of an avalanche barreling down into our driveway. As we waited in our downstairs bedroom, we listened to the many avalanche bombs exploding around us. When we felt the house lightly shake like a semi truck had driven by and heard an escape of air that is best described by what my 6-year-old daughter said, “Mommy, I think an elephant farted in the house,” we ran to the windows and saw snow blowing horizontally. “We’ve been hit!” Steven said.

We ran upstairs, opened the door to the mudroom, and saw the thick blanket of snow that now covered our skis, boots, and jackets. The front door had been blown open but was still attached, and the doorway was blocked to the rafters with about 10 feet of snow. There was no way out except through a downstairs door, which meant climbing over the avalanche debris to get to the front of the house.

Because we have been through this before, we were not as shocked as one might think. There was no freaking out, no hysterics. The children were never scared. We knew what needed to be done. The first order of business: get outside and survey the damage. When we finally did reach the front of our house, there was not a single sign a house was even there except for a small corner of the roof that stuck out. The front of our house had been completely plastered in snow. We were living in an igloo, or at least the façade of an igloo since the backside of our house was relatively snow-free.

Second order of business: call every plow guy we know in Alpine to start digging us out while we started shoveling our mudroom with the help of a neighbor and another friend. Amazingly, nothing in our entryway was damaged. Skis and snowboards didn’t even move, they were simply frozen in place by snow.

My husband and I each posted a photo of our snow-filled mudroom on our Facebook pages to let our friends and family know that we had been hit but were all okay. We had not idea the reaction it would get. The Truckee CHP reposted the photo, and by the end of the day we were overwhelmed by phone calls from all major news outlets, state and national, including the Weather Channel, CBS, NBC, CNN, KCRA, the San Francisco Chronicle, and more. We were getting phone calls and emails from friends all over the country who saw our front door on the news. It was exhausting. It made me feel sorry for celebrities who have to deal with stuff like this on a weekly basis.

By the end of January, our avalanche photo had been shared almost 5,000 times.

Before the next round of storms hit on Jan. 20, we were advised to evacuate by the county, the sheriff’s office, and friends in the know, which we did. Amazingly and thankfully, our house did not get hit this time around.

Would I buy this house again if I knew what was in store? That is a tough question. We love our house. It is our home. One of my children was born there. And selling a house with a reputation for avalanches is no easy feat. For now, we stay. And we pray for moderate storms and the snow gods to protect us.

~ Melissa Siig is a former associate editor at Moonshine Ink and the co-owner of the Tahoe Art Haus & Cinema. In her 16 years living in Tahoe, this is the second biggest storm cycle she has ever experienced. Her shoveling arms are extremely tired and she is dreaming of her upcoming trip to Mexico.