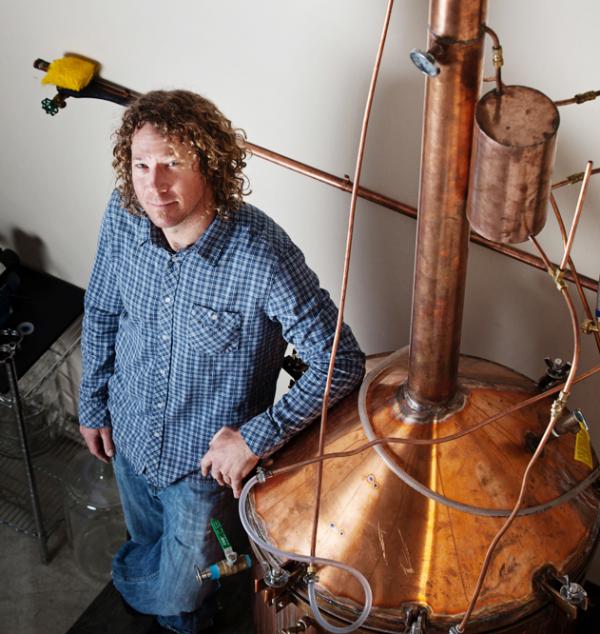 First a note of full disclosure: How could we resist doing a story about a business called Tahoe Moonshine Distillery? Especially when said business is hand-making craft spirits with Lake Tahoe water? Obviously we couldn’t. When we first heard about the distillery which is based in South Lake Tahoe besides hoping for a few samples of their rum vodka whiskey and gin we had to compliment them on their fine choice of names. With that out of the way we hightailed it down to South Lake to learn more about the region’s first distillery.

Tahoe Moonshine Distillery is not only the first of its kind in the Basin but besides a winery in Sparks that makes brandy it’s also probably the only distillery between Reno and wine country. Talking to Tahoe Moonshine Distillery owner and master distiller Jeff VanHee it’s not hard to discover why. It took VanHee three years and a lawyer to get through the bureaucratic paperwork and navigate the complex laws that govern making hard alcohol which fall under the authority of the Alcohol and Tobacco Tax and Trade Bureau a federal agency. Finally at the end of 2010 VanHee was able to secure the proper permits and open the distillery in a small warehouse in South Tahoe’s industrial zone.

VanHee a general contractor is a self-proclaimed mixologist. He brewed his own beer for years even winning Best Stout in 1996 from a local homebrew club. Later he started making ethanol for fuel. While in Costa Rica a lightbulb went off after he noticed the locals using molasses to keep the dust down on the roads. His first thought was to turn the syrup into fuel but then he got an even better idea — why not distill molasses into liquor? He built his own still and added passion fruit and bananas to the sticky stuff. ‘It was delicious’ said VanHee 39.

VanHee decided to turn his passion for mixing into a business. While waiting for his permits he interned at Fat Dog Spirits in Tampa Fla. which makes an award-winning honey vodka. Now he makes his own honey vodka at Tahoe Moonshine Distillery. Everything is done on-site from the fermenting (using yeast to turn sugar into alcohol) to distilling (cooking the alcohol off of the water) to proofing (adding Tahoe water to cut the proof down from 180 to 80) as well as the bottling and labeling.

It’s during the fermentation process that VanHee adds his distinctive ingredients — honey to the Snowflake Vodka and chamomile ginger cardamom coriander rose petals juniper berries and cucumber to the Jagged Peaks Gin. The Stormin’ Whiskey is aged with vanilla beans and crushed macadamia nuts in oak barrels for five months as is the Jug Dealer Dark Rum. The vodka and gin ferment for seven days and then sit for two more to absorb the flavors. VanHee is also aging some whisky and rum for two to five years for a reserved stock.

The distillery uses an old pot-style copper still that VanHee had custom made in Oregon. It currently produces 300 gallons of alcohol a month or 2000 bottles. With the new still that VanHee ordered he hopes to soon double that number.

Tahoe Moonshine spirits can be found at Campo Restaurant and Whole Foods in Reno and most of the South Lake casinos. VanHee expects to start delivering to the Biltmore Cal Neva and Incline Spirits any day. Due to problems with his California distributor VanHee has not been able to get his liquor into restaurants bars and stores on the California side of the lake but says he has 57 accounts already lined up.

VanHee is also teaming up with local businesses. He is working with Alpine Sierra Coffee Roasting Company to make Dream Bean Coffee Liquor and with Mt. Rose Cocktail Mixes to create Bloody Mary and blueberry pomtini pre-made drinks. Keep an eye out for Tahoe Moonshine’s peanut butter vodka which he tested at Campo and a pumpkin vodka.

VanHee is not stopping there. He has plans to make Irish cream absinthe and a hemp vodka and his online store which will sell leather flasks shot glasses tumblers and T-shirts should be up by the end of the month.

In February VanHee quit his job as a contractor to devote himself full time to the distillery.

‘I love the booze I’m making’ he said. ‘It’s a lot of fun to come up with different concoctions.’