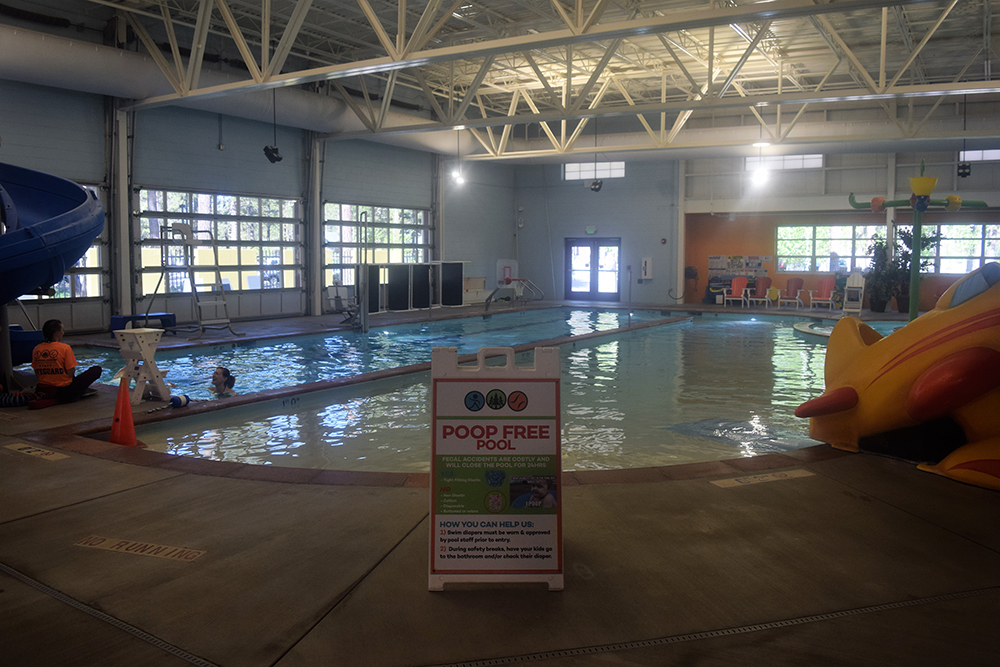 Walking into the Truckee-Donner Community Swimming Pool lobby, “POOP FREE POOL” is plastered everywhere, as well as other signs dissuading those with diarrhea from entering any of the pools. It’s as if Truckee-Donner Recreation & Park District staff is begging people on bended knee: Please, please, please, don’t poop in our pools.

The signage isn’t new. The A-frames spelling out anti-feces rules have been around for three years, said Kyle Jost, TDRPD’s marketing manager. What is new is the increase in “fecal incidents” during the past few weeks.

Since Memorial Day weekend, staff has witnessed four separate incidents dire enough for them to have to shut down the community pool each time for 24 hours.

The culprits aren’t specifically identified — likely children under 3 — but TDRPD’s Pete Kristian, senior recreation coordinator of aquatics, said it could be kids over those ages, too.

If that “something in the pool” is floating, that’s actually the easy part. Floaters mean the pool is only closed for one hour. That’s 60 minutes to remove the material, raise chlorine levels, and filter and circulate the water. Time enough for waiting patrons to enjoy lunch.

High levels of chlorine are used to kill potential waterborne diseases: From formed fecal matter in the pool, there’s the possibility of Giardia lamblia, an intestinal parasite disease that can cause diarrhea, gas, and upset stomach; or from diarrhea in the pool, there’s risk of the heavy-hitting Cryptosporidium, the leading parasitical cause of waterborne illnesses.

The pool’s current rules and regs state that anyone age 3 and under are required to wear “a snug fitting reusable swim diaper with elastic on the top and legs,” according to the district’s Fecal Accident Policy & Procedure. There’s also a 10-minute bathroom break every hour — cleverly disguised as “adult swim” — to encourage all swimmers to utilize the pool’s facilities. Fecal mitigation policies are in place, but it’s up to the parents to actually enforce things, said Jost.

“We can’t check every single diaper after they’ve left the bathroom to go change and all that,” he said. “It’s really the responsibility of the parent, guardian, caretaker, whoever to make sure that these kids are properly fitted with a proper diaper. That’s really what it comes down to, to make sure this stops happening.”

That policy, by the way, means no disposable diapers allowed — the most maddening part of the situation to Heather Hawkins, founder and CEO of Elevation Strategy and a regular at the community pool.

“Arriving at the pool not knowing disposables were verboten, we were forced to buy a $12 to $15 swim diaper that didn’t even fit!” wrote Hawkins in an email to Moonshine Ink. “[On one] occasion when we forgot one, they literally had none that fit for purchase and we had to dig through the lost and found to see if there was one that fit … I had a disposable in my bag, mind you, but they said ‘No, you’re not allowed back in the locker room without showing me a reusable one.’”

To TDRPD, disposable diapers just aren’t as effective; they’re “kind of porous” as Kristian put it.

“They’re not as tight, holding everything in like we’re looking for. They soak up water and then that water breathes back and forth.”

TDRPD isn’t trying to force people to purchase the tight-fitting elastic underwear that is allowed at the pool through the district, but staff are open to other solutions, so long as the parents comply with diaper regulations.

“If people want to ask us at the front desk what we’d recommend, they want to get them on their own, we could certainly help with that,” Kristian furthered. “Our experience has been that rubber pants are just better, just a better solution. And they’re reusable. It’s not like you can use them once.”

Hawkins argued that other pools in town allow disposable diapers “and they aren’t closed every third day for poop. I actually think it’s that nondisposables are a blowout waiting to happen. Disposables are way more forgiving.”

Regarding the recent increase in incidents, TDRPD doesn’t have a nailed down reason — the summer season? Warm weather? Regardless, the situation is frustrating for both community members and staff.

As things stand, there are a few ideas circulating around the district to decrease the amount of Unidentified Floating Objects that TDRPD is eliciting community feedback on before final decisions are made, including the following:

(By the way, if you’re thinking, duh, just use that wee alert chemical that identifies which kid — or adult! — sprang a leak, bad news: It’s a myth you probably got told by adults when you were young enough to be a suspect in such matters.)