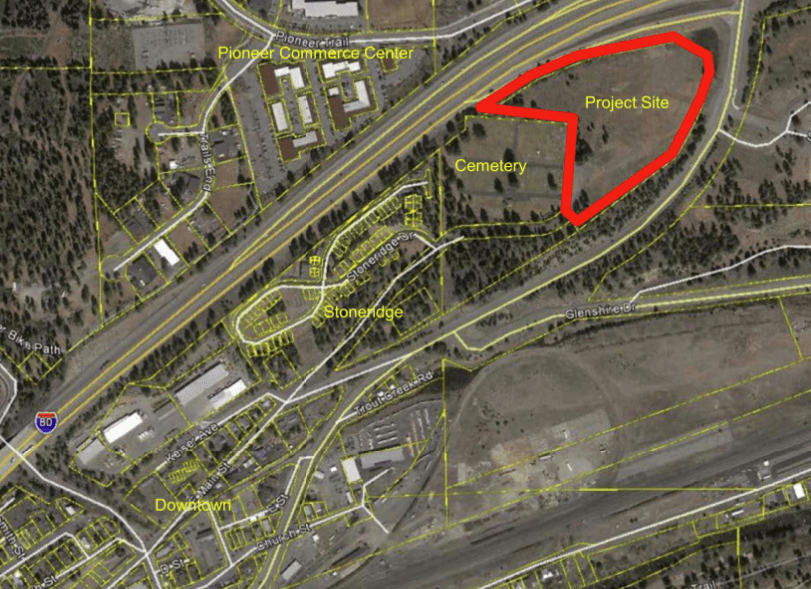 A new player in the housing scene took a big step forward Thursday night when the Truckee Planning Commission recommended approval of the hotel/residential development known as Coburn Crossing, with amendments. The project plan to date includes a 114-room Marriott Springhill Suites hotel and 138 residential units, to be built on the 10.35-acre property wedged between I-80 and Donner Pass Road, to the east of the Truckee Cemetery.

The project will be reviewed for approval by the Truckee Town Council on Jan. 24. If approved, Triumph will be moving dirt by June, and plans to have the hotel and apartments open by March 2018, according to Steve Virostek, co-founder and principal of Triumph Partners.

Virostek says that Marriott reached out to him about this time last year in the hopes the developer would consider spearheading a project on this plot of land, slated for about 3 acres of hotel and 7 acres of retail use. Marriott first attempted to build a hotel on this property in 2007, with a plan that also called for a two-story residence area with first-floor retail and offices. After talking with Truckee Town Manager Tony Lashbrook about the project, Triumph decided to scrap the retail and build residential units instead to address Truckee’s housing crisis. Five three-story buildings are slated for the property, one for the hotel and four for the apartments.

The Affordability of Market Rate

Virostek’s approach to fill the housing gap, however, is unique in that only six of the units will be income deed restricted as affordable housing, one unit for every seven potential hotel employees. The rest of the units are intended to be market rate units targeted toward the “missing middle,” or people who make too much to be accepted into lower income deed restricted housing, but have trouble finding housing in Truckee’s strained market. The proposed rent prices for the project point toward those making 80 percent to 120 percent of the Area Median Income (AMI), which in Truckee was determined to be $72,156, according to the 2016 Regional Housing Study. To offset the lack of typical affordable housing required by the town for a project of this size — which would be 15 percent of the units for low and very low income households — the developer has offered to implement a different sort of deed restriction: Only those who can prove full time residency in Truckee will be eligible to rent there.

“This is a local’s housing project in perpetuity,” said Virostek in the Dec. 15 commission meeting. Virostek says Triumph will use Cambridge Real Estate Services to manage the properties and ensure that the residency stipulation is fulfilled. A yearly audit on the properties will be conducted by the town, Lashbrook said at the hearing. Leases will also have a minimum of six months — although Virostek stated he would be open to one year and longer leases — while subletting, short term rental services like Airbnb and VRBO, and condominiumization of the units will be prohibited. One of the planning commission’s recommendations also calls for inclusion of a local employment provision in the deed restriction, which would require renters to both live and work in Truckee.

Some of the main concerns during the commission meeting Thursday included worry over the safety of the 262 estimated non-vehicle trips the development will potentially create. To address these concerns and the safety of pedestrians and cyclists moving in between the development and downtown Truckee, the planning commission recommended the town council prioritize construction of a sidewalk connection to downtown from the Stoneridge driveway to the pocket park as a future capital improvement project.

Because of complications in the nature of town jurisdiction over off-site improvements, the recommendation was made separately from the Triumph decision. Triumph has agreed to connect their development to Stoneridge by 650 feet of sidewalk, but it was unknown in the meeting whether or not Stoneridge is responsible to finish the job.

Another traffic-related concern arose from a conclusion that a roundabout would be needed after completion of 138 units — hotel or residential — and that payment from the developer to cover this roundabout would make the project infeasible for Triumph. Because of this, the town plans to cover the cost of the roundabout using funds earmarked to encourage affordable housing.

“We could approve this project, not fund the roundabout, and probably not have a project,” said Lashbrook, who anticipates the cost of the roundabout to be more than $1 million.

Alexis Ollar, executive director of Mountain Area Preservation (MAP), said in the meeting that the funding could be better used elsewhere in Truckee for better services, downpayment assistance, or rental assistance. She also mentioned that although MAP is supportive of the overall plan for the project, it is concerned over the effect on traffic, parking, and the apartment’s rental rates.

“We are not opposed to the project but we also want to ensure that housing for the local workforce is successful,” said Ollar, later adding that “market rate is not the same as workforce housing.”

MAP itself was created in 1987 as a force to oppose the building of a Kmart on the very same plot of land the Triumph development is slated for now.