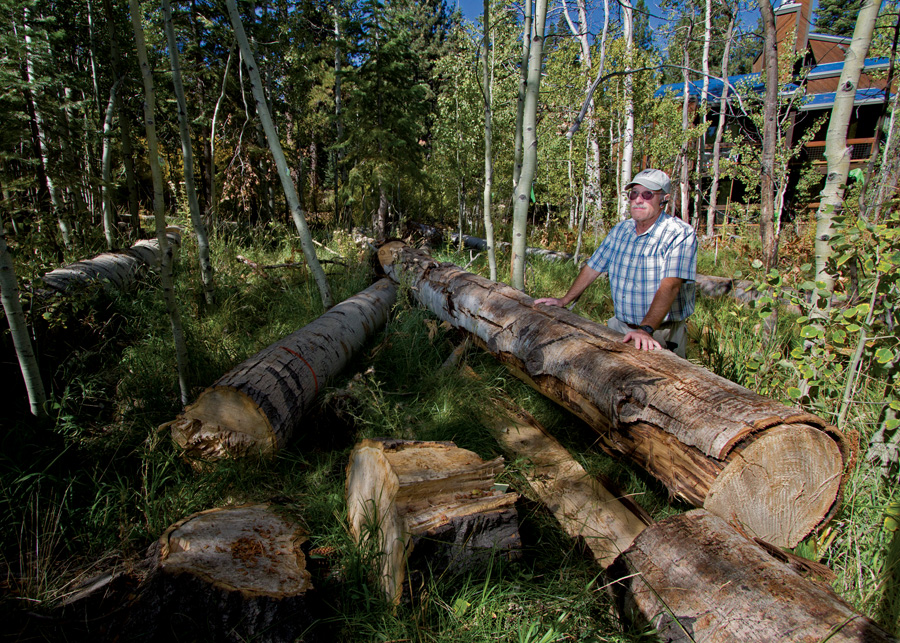 Bob Thornton gingerly steps over small streams, pooled water, and saturated mud until he reaches the thick trunk of a toppled aspen estimated to be a century old. All around him enormous fallen aspen trees lie scattered across the muddy meadow like giant white Lincoln Logs.

“They were all live trees when they came down,” Thornton says. “The roots just rotted off.”

Thornton and the many other residents of Aspen Grove condos were drawn to this Northstar property by its centerpiece — a majestic, old-growth stand of aspen with trunks twice the size of telephone poles. Today, the aspens are withering and falling to the ground, their rotted roots unable to keep the trees upright in the soggy soil. Some have fallen on condo buildings. Others have been chainsawed after arborists said the leaning trees were about to fall on their own.

Thornton and his neighbors say the trees are being drowned by water leaking into the property from a retention pond built during the Northstar Village construction, which started in 2004. Now, many of the younger trees are also dying, and a large portion of the meadow is underwater even in the middle of September during one of the driest years in recent memory. Across the parking lot, water seeps steadily from the hillside and dribbles down in tiny rivulets toward the asphalt.

The aspen die-off and the soaked hillside are just two symptoms of what Thornton and his property association say is a flood of underground water seeping down to their property, allegedly drowning firs and pine trees, rotting condo foundations, and eating away at their parking lot. Thornton, who bought his condo in 2003, said he could not see through the thick stand of aspens when he first moved into his condo. Now, scattered trunks and sickly trees leave wide breaks in the grove.

“These are all legacy trees, and they are all dead,” says Thornton. “My condo is right there,” he says, pointing across the waterlogged meadow, “so this is my view now — this log pile.”

As Thornton talks, a sump pump kicks on in the crawl space of an adjoining condo unit. The pump makes a steady whirring sound, followed by the gurgle of water streaming through a network of PVC pipes and black, corrugated plastic tubes running from the crawl space and out into the meadow. Water suddenly gushes from the end of the pipe.

The sump pump is one of three that Thornton says have been pumping as much as 5,000 gallons of water a day out of three condo crawl spaces. As Thornton continues speaking, the pump kicks on and off in a rhythmic cycle, governed by the amount of water seeping into the ground floor of the condo unit. The cinderblock foundation of the condo building where the pump is located is visibly corroded at its base.

Thornton is the president of the board of the Aspen Grove Condo Association, a neighborhood of 180 condo owners directly downslope from the Northstar Village. Over the last four years, the condo association has spent $2.5 million fighting to have Northstar Village developers and owners remove a retention pond built during the village construction. To fund the litigation, Thornton and his board have levied three separate assessments on the condo association’s property owners — totaling approximately $13,000 per condo owner. After years of amassing research, seeking expert opinions, and sitting through long days in the courtroom, the condo association got its first taste of legal victory on Oct. 15 — a tentative ruling from a Placer County Superior Court judge that said the Northstar Village owners and developers have to remove or re-locate the retention pond.

“The water seepage has significantly surcharged the natural groundwater levels on plaintiff’s real property in varying degrees and times on a seasonal basis and has not been effectively abated,” read the tentative ruling by Place County Superior Court Judge Lloyd Von Der Mehden.

Vail Resorts, which now owns Trimont Land Company, declined to comment on the litigation. Blake Riva, managing partner for East West Partners-Tahoe said the retention pond was designed and constructed correctly. East West Partners is both the developer of the Northstar Village and the management company of Northstar Mountain Properties.

“From Northstar Mountain Properties’ perspective, the pond was constructed as designed, it was approved by Placer County, and it is functioning as intended,” said Riva.

Riva said that court documents show the Aspen Grove Condo area has had water issues long before the retention pond was constructed.

“If you review the testimony from the trial, you will find that Aspen Grove has had water issues on their property going back to a point in time well before the retention pond was ever constructed,” said Riva.

Aspen Grove residents denied they ever had these water issues before the pond. They said children used to play on the dry ground of the meadow and firewood used to be delivered for decades on a dirt road that is now too wet to drive over. Recently, when a construction company came in to dig out utility boxes on the Aspen Grove property, the workers assumed they had somehow broken into a water line because so much water filled the utility box holes, said Thornton.

The Aspen Grove Condominium Association and the various corporations associated with the Northstar Village will now wait for the final ruling, and then proceed with the second half of the litigation, which seeks damages.

The Northstar Village construction was a $200 million, multi-year project that started in 2004. According to the closing arguments in the lawsuit filed by the condo association, prior to construction virtually all of the stormwater from the village property flowed through storm drains and was discharged into West Martis Creek.

The village construction added 6.5 acres of impervious area (pavement, roofs, and other water-shedding development) to the Northstar base area, according to Aspen Grove’s legal filing. “As part of the extensive expansion, East West Partners proposed to alter the natural and historic drainage on their property by diverting all storm drainage and runoff for the entire 149-acre watershed through new drainage improvements.”

Aspen Grove contends that East West Partners told them that the retention basin would be dry 90 percent of the time and would not hold more than six inches of water, according to legal filings.

Aspen Grove said that shortly after the basin was constructed in 2004, water began seeping from below the basin. The seepage was reported by an engineering firm working on the village construction project, according to court documents. Then, in 2005, the basin overflowed, and East West Partners sandbagged the outflow of the basin and pumped water from the basin for months. Alterations were made to the retention basin and some channels were constructed near one of the Aspen Grove Condominium buildings to divert water, but none of the work solved the water problem, according to Aspen Grove officials.

According to Thornton, the basin has always held a significant amount of water year-round since it was constructed. Thornton and his association’s legal filings contend that East West Partners hit into a spring when they were constructing the underground parking for the village, and that water was re-routed to the retention pond. East West Partners’ Riva denies this ever happened.

Recollections of a Resident

Liz Reagor has lived in the Aspen Grove condos for 40 years. She learned about the condo unit she would buy from a 1972 San Francisco Chronicle newspaper ad. She moved into the unit in 1973.

“At that time it was just gorgeous,” said Reagor. “The ground was dry around the aspen grove. We bought on the aspen grove because of that purpose — the beauty of the trees and the serenity.”

Reagor served on the condo association board for nearly three decades, and even became a member of the development advisory committee when plans for a new village at the Northstar base area surfaced.

Reagor said the committee asked for a 500-foot setback between the Aspen Grove condos and the parking lots and new village construction. Reagor has no recollection of hearing about the retention pond, which ended up being built 60 feet from the Aspen Grove condo development, according to the association.

Since the pond was built, Reagor said she began to notice a steady increase in the wetness of the ground surrounding the condos, until today, when the once-firm ground of the meadow has turned into a marsh.

“Now the aspen grove looks like a Florida swamp,” said Reagor. “It is obvious to us where the water is coming from. You can’t fix it. It would only be a Band-Aid. I am hoping that the pond will be removed.”

The Placer County Superior Court trial has been long and complicated. The lawsuit was filed in 2008, and both sides armed themselves with experts in aspen ecology, hydrology, and the details of development at the site.

The legal battle went on for four years before the tentative ruling was issued. Following the tentative ruling, Placer County sent a letter to both Aspen Grove and the defendants, saying the county was prepared and willing to help fulfill the court order.

“I am writing to offer the County of Placer’s assistance in accomplishing compliance with the Court’s order. The County stands ready to meet with the parties to discuss how to promptly and efficiently comply with the Court’s ruling,” read an Oct. 29 letter from Placer County Deputy Counsel David Huskey.

The second half of the trial, which will determine damages, has not even begun. And there are still the very real possibilities of appeals.

Thornton said he believes the drawn-out legal process was intentionally lengthened with a specific goal in mind.

“I think their strategy may be to try to bankrupt us,” said Thornton.

Thornton is relieved that the court appears to be siding with Aspen Grove on the relocation of the pond.

“We have no choice but to stop the water,” said Thornton. “What will this look like if we have to deal with this water forever? I don’t even want to think about what will happen to the value of our condos if this becomes a wasteland.”

But even a legal victory on damages will be bittersweet for Thornton.

“The property, in my lifetime, will never be what it was. It will take 60 or 80 years for it to come back — if ever,” said Thornton.

Dying Aspens, Waterlogged Condos, a Resort Village, and a Legal Battle
Business
9:30 am / 10:00 am

Dying Aspens, Waterlogged Condos, a Resort Village, and a Legal Battle
Sports & Outdoors / Wellness
9:30 am / 10:00 am