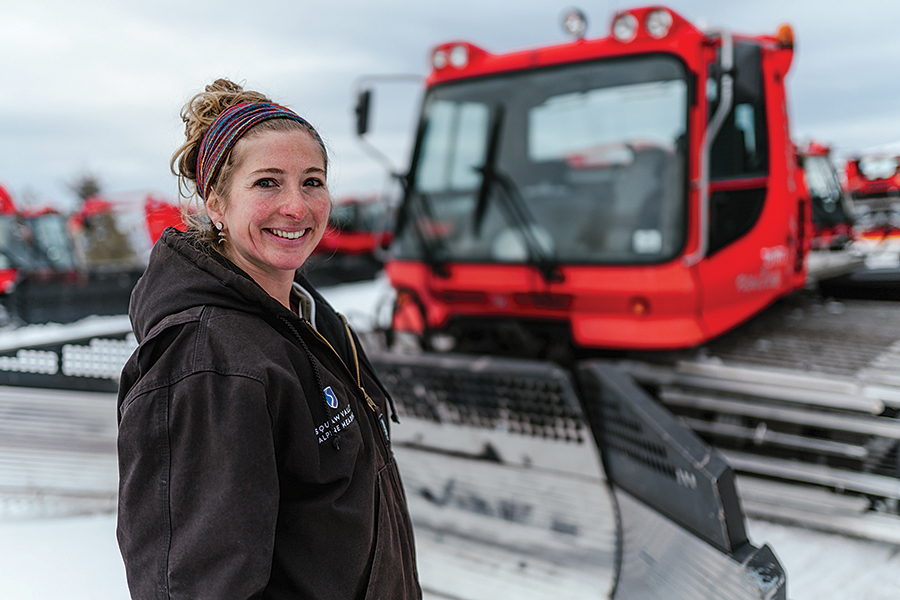 Maria Hart doesn’t exactly fit the stereotype of a groomer. She’s a petite 29-year-old blonde who, at 5-foot-4, is barely as tall as the door on the 17,000-pound snowcat she drives for Squaw Valley. Although there may be an image of groomers as rough, bearded mountain men in a tight-knit boys’ club, women have been quietly entering the field for decades. While female groomers still only make up a fraction of the team — at Squaw Valley Alpine Meadows women make up 6 percent of the grooming crew — women don’t need a #MeToo movement to break into grooming; only the desire to learn.

Hart’s interest in grooming stems from her work on a vineyard in Sonoma County from 2013 to 2015. Originally from Binghamton, New York, Hart moved to Tahoe for one year before relocating to Sonoma to work at Windsor Oaks Vineyard. There, she learned to operate a tractor and fix trucks, which she picked up from watching YouTube videos. Soon she was driving a forklift and Gradall excavator, used to lift up to 2.5 tons of grapes. When she first started at the vineyard, Hart said that some of the male workers refused to let her lift heavy things, like the 40-pound grape lugs, but she knew she could.

One aspect of the vineyard that she particularly loved was harvest, when they worked at the coolest time of day, from 2 a.m. until noon.

“I enjoyed watching the sunrise, being up at different times of the day than normal people,” she said.

Missing the mountains, in 2015 Hart decided to move back to Tahoe, and to take her love of working in the middle of night to the snow.

“I came back for grooming. It seemed like a cool new experience to try,” she said. “I thought I would enjoy the graveyard shift.” The hours are from 1 to 10 a.m.

Hart started working terrain at Squaw at Bailey’s Beach and High Camp. The crew grooms in packs for both safety and to make sure they cover all the ground. By the end of the first year, Hart was leading the pack at Shirley and the beginner area. Her favorite moments were, like at the vineyard, when she and the other groomers took a break at the top of Emigrant to watch the sunrise or when they groomed under a full moon.

“It’s why I stuck with the graveyard shift,” Hart said. “I knew getting the view was worth it.”

Hart has also had some scary moments in the grooming machine, a PistenBully 400, which is 16 feet wide and 25 feet long, including the blade and tiller. She has been disoriented in a storm at the bottom of Shirley where she couldn’t see a single landmark, and once, after a lot of fresh snow had fallen, started sliding backwards down Red Dog toward a snow gun. From listening to the other groomers tell stories, she knew she had to drive backwards to regain control.

Hart says she has always felt accepted by the male groomers, and that being a woman can have some advantages. For one, she is small enough to curl up inside the cab to take a nap during her half-hour lunch break. And sometimes, she says, she brings more finesse to the art of grooming than the guys.

“Men will beat up the machines, but women are more gentle with it, they think things through,” said Wilhelmy, who has been at Squaw for 23 years.

He says the ski area has had female groomers on and off for the past 30 years, and in fact he was inspired to get into grooming when he was young by one of his female ski coaches who was also a groomer.

“Women are a minority in the whole industry, but they have been doing it for a long time,” Wilhelmy said. “I think at this point every grooming crew has a woman on their crew. I would be more surprised if they didn’t, but it’s still going to be a small number. But gone are the days of ‘this is a man’s world;’ now it’s all about who can do the job.”

Alpine Meadows has two female groomers. One is grooming supervisor Tiffany Greeson, 30, who has been grooming at Alpine for eight years. Her job has brought her to four different countries, including Russia for the 2014 Sochi Olympics, where she operated snowcats for snowmaking.

Sarah Person is the other woman on the Squaw grooming crew. Hailing from Michigan, Person, 43, has been grooming at Squaw for six years. She believes women, in their desire to show their worth, make great employees.

“You will definitely get more from a female worker, and attention to detail,” Person said. “There is kind of an unwritten sense of needing to prove yourself a little bit. If you are a hard worker and put in a lot of effort and do a good job … [you are accepted].”

This season, after five days a week on the graveyard shift started to take a toll on Hart, she got a job grooming the swing shift (3:30 p.m. to 1 a.m.) in the terrain park two days a week. She also bartends at the Bridgetender in Tahoe City. Hart is the first female terrain park groomer at Squaw.

“It’s nice to add a little diversity to the crew,” she said. “It’s different now. You can’t just have a bunch of dudes hanging around thinking they are the only ones in the world who can do something. I like to challenge guys to think differently and realize anyone can do it … it keeps some of the old-school dudes honest.”

Why aren’t there more female groomers? Person and Hart both guess it’s because women don’t know it’s an option because there aren’t that many women in the industry, or they think they have to have heavy equipment experience.

“If you can do the graveyard shift, you can be a groomer,” Hart said. “Anyone can learn it. I hope that other girls reading this article will think it is possible and do it.”