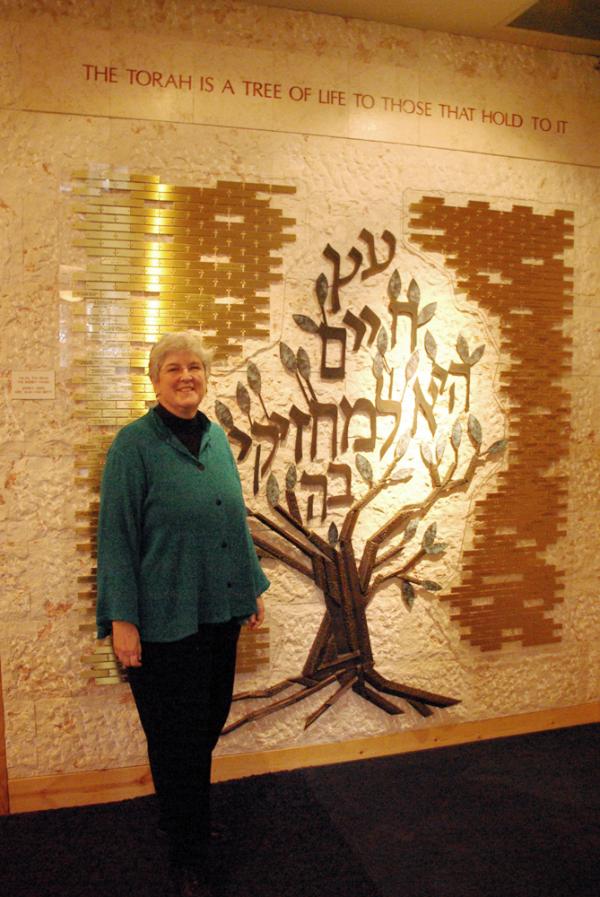 Rabbi Meredith Cahn is the newly ordained spiritual leader of the North Tahoe Hebrew Congregation in Tahoe Vista. She describes the temple as ‘an unbelievably welcoming place.’ Ever since her transplant from Marin County, she has been impressed by the way people embrace newcomers and quoted one member as saying, ‘I’m involved because when I appeared, they welcomed me.’ Rabbi Cahn came to NTHC in September ‘to serve the community that is here, to be available to Jews who need a spiritual leader, to be a part of the wonderful family, and to keep the Jewish faith alive and vibrant,’ she said.

Jews around the world are preparing for one of their most vibrant holidays, the Festival of Lights: Chanukah (or Hanukkah), which this year runs from sunset on Dec. 20 to Dec. 28. It is an eight-day festival celebrating the miracle of the oil that burned in a menorah for eight days at the rededication of the Temple in the second century, BC, when there had been only enough oil for one day’s sustenance. Ironically, Chanukah, which evolved out of a successful revolution against assimilation and suppression of Judaism by the Hellenistic culture, has become, in many ways, a holiday that reflects assimilation into the U.S., being the Jewish counterpart to Christmas with the gift-giving and decorations.

The NTHC community began gathering in 1979, holding services in people’s homes, at the North Tahoe Event Center, and even in local casinos. The Tahoe Vista synagogue was completed in 2002. Today, the NTHC is comprised of about 110 families and includes many unaffiliated worshipers. While the NTHC practices Reform Judaism (a liberal branch of Judaism), it serves all denominations of Jews. ‘We span the spectrum from Orthodox to people who are Jews by choice. There are a lot of different beliefs and opinions. If you have three Jews in a room, you have four opinions,’ Cahn joked.

One question I had for the rabbi was, ‘What do I call this place? Is it a temple or a synagogue?’ Conservative Jews usually use the Greek word ‘synagogue,’ which is a translation of the Hebrew beit k’nesset, or house of assembly. Reform Jews use ‘temple’ because they consider all of their meeting places to be the equivalent of, or a replacement for, the Temple in Jerusalem, which was destroyed (for a second time) by the Romans in 70 AD. Jews consider the Temple’s remaining wall their holiest site and continue to pray there. The Orthodox use the Yiddish word ‘shul,’ which is derived from a German word for school and emphasizes the synagogue’s focus on study. Regardless of the name one uses, it is the community’s place of prayer, education, and study, and a center for charitable work and social meetings.

‘The purpose of being a Jew is to be a mensch,’ said Rabbi Cahn. A mensch is a person of integrity and honor, an authentic person who helps others. A person becomes a mensch through taking action, and by performing a mitzvah (a good deed or Jewish religious duty). These mitzvot are found in the entirety of Jewish law and teachings, the Torah. The Torah, in a more limited sense, also refers to the Five Books of Moses, the first five books of the Bible. The 613 commandments that Jews are obligated to observe are considered mitzvot. The prophet Micah summarized the 613 commandments in three principles.

‘What does HaShem require of you but to do justice, love, mercy, and behave modestly?’ (Micah 6:8)

NTHC has many opportunities for members to engage in active study of Judaic teachings. Torah Tots is a program for families with young children through preschool. It is a time to bond and to discuss how to keep a Jewish home and other social issues. Religious school meets on Tuesdays, September through May, and is for children kindergarten through B’nai Mitzvah, or coming of age at 13. This milestone is marked by a ceremony called a Bar Mitzvah for boys and Bat Mitzvah for girls. Teens in the congregation have formed a group, North Tahoe Teens and Youth, which meets monthly with Rabbi Cahn to discuss teen issues and to have fun. They also assist with the religious school program and can participate in Eitz Chaim, further religious studies.

NTHC also has a book group, a sisterhood, a men’s club, Mah Jongg, and bingo, family pizza night, and potlucks. Because one of the main tenets of Judaism is tikkun olam, or healing and repair of the world, giving to the community is a natural order of things. At this time of year, the NTHC undertakes the Holiday Food and Clothing Project, which distributes food and winter clothing to North Shore families in need. The giveaway is Saturday, Dec. 17, at the North Tahoe Event Center in Kings Beach.

Shabbat services are held every Friday night at 7 p.m. Be sure to check the calendar for community gatherings and religious study times.