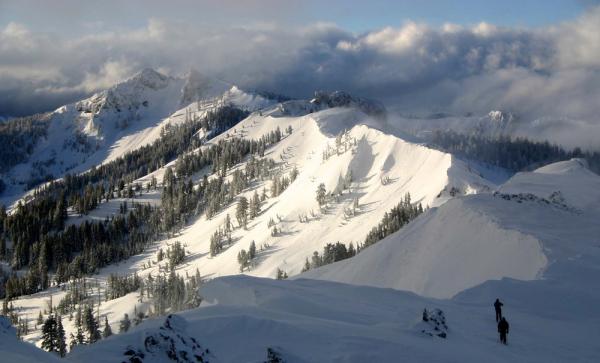 For the modern secular enthusiast, ski resort slopes around the Tahoe Basin contain a notable bevy of holy destinations. These sites aren’t sanctioned by any faith: they simply provide the subsistence and potential for participating in one of the world’s greatest winter playgrounds. What makes a great resort run? For some, it’s launching into a rowdy chimney chute that makes the hair stand up on the back of the neck. For others it’s goggle tanning while sauntering down mousy terrain. For most, memorable slopes include view, favorable snow surface, unique line or even a variety of lines, history, but most of all the exceptional fun of gliding down it. Here’s one person’s fun meter rating of 10 Tahoe runs. 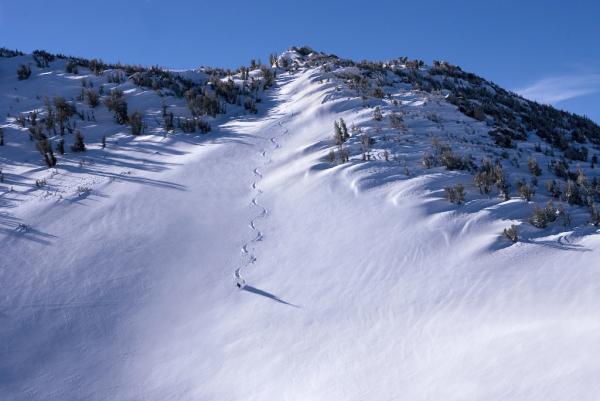 Come April and May, the slopes of the High Traverse offer a harvest of springtime fun and arguably deliver the best spring skiing in the Tahoe Basin – perhaps the country. From Ward Peak’s 8,637-foot summit, go skier’s right and over the southern ridge into Ward Canyon. The short, well-traveled traverse accesses the Sherwood Bowls, which include Sun Bowl, Big Bend Bowl, SP Bowl and South Face. Wide open, steep, and with more than 600 acres to choose from, the High Traverse area makes for a springtime corn Mecca. Oh, by the way, it’s not too bad on powder days. ‘It requires a little bit of a hike, but once you arrive you’ve got a front-row view of Lake Tahoe, Twin Peaks and the Granite Chief Wilderness,’ explains Alpine’s Rachel Woods. ‘Those untracked powder lines sparkle like fireflies in the morning sunrise.’

Incline Village occupies the most northern niche of Lake Tahoe. Originally the town received its name from the grade that was used to carry timber into the lake during the 1800s. A century later, the same grade is being used to carry skiers. From the top of 8,540-foot Diamond Peak, Crystal Ridge descends into a full-fare buffet of rolling shoulders and ticklish carving. The well-manicured slope cradles the novice to advanced, and plummets towards the lake in jaw-dropping splendor. Along the way skiers and riders can pop into half a dozen black diamond runs and nifty shots through the timber that travel back to the Crystal Express high-speed quad.

When Bill Killebrew was 8 years old, his father Hugh, owner of Heavenly at Tahoe, enjoyed taking him camping. A favorite spot to hike for an overnight was at the top of Mott’s Canyon on the Nevada side of Monument Peak. It was during these fall camping trips that the older Killebrew taught his son about the constellations. Years later, as Heavenly expanded lifts into the area, Bill, then CEO of the ski area, named the runs in honor of nights camping with his dad. It’s easy to group the entire spectrum as one. Visitors cruise over choice corduroy into the heart of Heavenly’s intermediate terrain. From each run striking scenery unfolds with sweeping views of the Carson Valley. In the spring, the east facing Milky Way Bowl benefits from a 10,000-foot elevation. Its neighboring sister Big Dipper Bowl is spring fun, too. 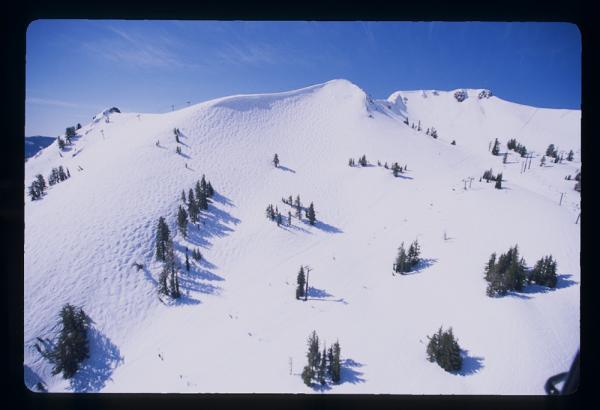 In 1909, Arthur Jost built a small pier and hotel at water’s edge, five miles south of Tahoe City in a sheltered section of the lake under the shadows of Ellis Peak. He called his friendly resort ‘Homewood – and all the name implies.’ Far from the maddening crowd, Homewood’s spectacular scenery can be explored at leisure. Incomparable views are discovered schussing the soothing terrain of Rainbow Ridge. Roaming from its 7,880-foot summit over its playful slope, one can experience restorative solitude or marvel at Lake Tahoe’s kaleidoscopic displays of color. The more rowdy can plunge off Crystal Ridge at several black diamond runs towards the Ellis Chair. Moderate slopes are discovered descending north towards The Quad chairlift. ‘Rainbow Ridge is comfort food and sort of the main artery of the resort,’ says Homewood’s Collier Cook. ‘And its lake views can’t be matched.’

Below 9,850-foot Thimble Peak lies a wide-open, coral-horned surface that eases onto the ridge above the north facing chutes of Thunder Saddle. Bordering the ridgeline between Thunder Saddle and The Cirque is terrain called Larry’s Lip. In 1976, Kirkwood’s grooming manager Joe Clark recruited an authentic, Colorado cowboy named Larry. Aloof, arrogant, and abrasive, the roughneck drank nights off at the Kirkwood Inn. If a stranger dared to look at him, he’d scowl and pick a fight. One evening while grooming the ridgeline next to the out-of-bounds and dangerous terrain of the Cirque, the grumpy cowpuncher brought his snowcat blade down, only to clip a large rock. The impact put his face into the windshield and split his lip, making his permanent scowl more frightening than ever before. With views of Mokelumne Wilderness overlooking Bear Valley to the south, Larry’s Lip travels dangerously close to the abyss of the Cirque, just enough for a pucker factor, but its clean and wide expanse makes for easy turning down into the meadow underneath Eagle Bowl.

Ever since Mt. Rose opened up the forbiddingly steep section of their mountain called ‘The Chutes,’ advanced hucksters have been flocking to its terrain and leaving the rest of the mountain alone. They shouldn’t. Underneath the slide side Blazing Zephyr chairlift rests Gold Run. Its views are a perfection of contrasts: burnt umber cliffs and snow that reflects the deep color of the sky while slicing into the beige of the Carson Valley below. But its sweat-inducing steeps and bumps as big as Hummers are what quench the appetite. ‘As an added bonus,’ says Mt. Rose marketer Mike Pierce, ‘Gold faces due east so the first light in the morning highlights the slope’s features like an intricate sculpture. It also makes for choice corn in the spring.’

It was in 1983 that Northstar decided to flex its muscles by installing a chair off the tree-filled backside of 8,610-foot Mount Pluto. Once the site of a historic logging camp, the terrain’s forested vistas offer calming panoramas of Martis Valley, Donner Summit and Castle Peak. Eight black diamond tree-lined runs dwell alongside each other, and each is a screamer with sustained pitch for arcing high-speed, giant slalom turns. Of all these, Ironhorse trumpets an acme of bump-free skiing and riding that makes the quads quiver and smiles beam. ‘It’s a ripper,’ says Iris Lazzereschi, a member of Northstar’s Freeride Team. ‘To do it non-stop is a wild ride.’

Reverend Bruce Crawford of the Federated Church in Placerville loved to ski. Most days during the 1970s you could set your watch to his carving turns down a certain steep, narrow chute. Treacherous, with many natural obstacles, few entered its domain. Crawford pleaded with then-resort owner Vern Sprock never to clear the run so he wouldn’t have to share it with anybody else. The resort eventually did clear and widen its terrain, but named the slope in honor of Crawford. From the summit of 8,852-foot Huckleberry Mountain, the run’s mantled geography offers views of Lake Tahoe, Echo Summit and forested mountains. Its street-tough, north facing surface stays cold and hard, and becomes gullied into massive mounds between storms. ‘It’s pretty sick in the timber alongside the run, too,’ says Sierra Freeride Team member Joanie Anderson. ‘It’s steep and gets tremendous powder stashes if you get tired of the bumps.’

In 1952, Squaw Valley installed the resort’s second chairlift up the eastern headwall of Squaw Peak. Called the ‘Jigback Tram,’ the gas-operated, timber-towered tramway opened up 360 degrees of world-class terrain. Highlighted by cobalt views of Lake Tahoe and the spine of the Northern Sierra Nevada, today’s high-speed detachable six-person chair jets enthusiasts to an array of black diamond and double black diamond runs. The Nose to Hogsback is a ridge that separates the North Bowl from the Face of Headwall. Pitchy and with a variety of lines, skiers and riders carve turns along the ridge or on either side of it. Near its bottom runout, the milder upper portion of the ridge drops off suddenly into the steep, eye-popping Hogsback. ‘You have to commit yourself to the slope before you actually see it,’ says veteran Warren Miller cameraman Tom Day. ‘But after a couple of turns the rest of the run comes into view and anxieties give way to exultation.’

For 30 years, Sugar Bowl’s Silver Belt race embraced global proportions, and at its peak, was one of the premier skiing events in the world. Surrounded by views of the Pacific Crest and the American River Gorge, the historic giant slalom began at the top of Mount Lincoln. Racers descended from a steep start straight down through a large gully and below into a sheltered basin. Eventually the course would be officially rated the steepest race terrain in California, and the fifth most difficult course in North America. ‘The course was very European in design, meaning that it followed the actual terrain of the mountain. It offered a lot of variety,’ explains Olympic Bronze medalist Greg Jones who won the event in 1975. Today, visitors can check their speed and have fun snaking down its gully, or climb the walls into perfectly spaced timber before sweeping down a vaulted face into the smooth-sloped meadow.