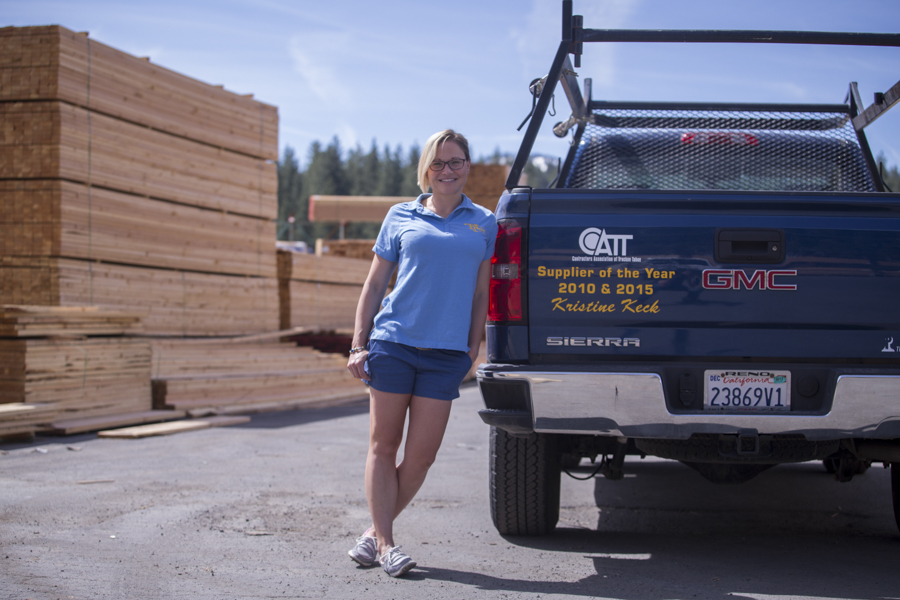 Construction is a driving force in the Tahoe economy.

The industry is the third largest employer in Tahoe, with 12.6 percent of the local population working at construction-based businesses. And yet, women are underrepresented in the field.

But some women are pioneers in the industry and have risen to the top of their trades, from engineering to architecture, from contracting to sales. They all agree that women face barriers in construction, but assert the industry benefits from the different perspectives that women contribute, and are optimistic about the future.

Patty Heller is the matriarch of Heller Construction, the company she and her husband Bob started together 30 years ago. In the ’70s, Heller worked in interior design retail, and Bob was a carpenter. The two joined professional forces in 1987 to form what is now a multi-generational family business that specializes in building custom homes. Their sons Cody and Dan are a partner and a carpenter with the company, respectively.

Being a family business is a core value of the company, Heller says, and she feels a lot of pride in her family’s work. She isn’t blind to the struggles of this industry, which she knows to be competitive, and “financially challenging and mentally and physically taxing.” But her passion for the job is what keeps her going.

“I love the process of the creation of a home, from the first client meeting, working with the architects, addressing the needs of the clients, watching our team build the home, to the final walk-through,” Heller said. “As challenging as the build might be, when all is complete, there is that magnificent feeling of completion.”

When they first started the company, Heller said that she wasn’t always recognized as a partner, since she did not do the physical work. But inside the company, she said, her coworkers recognized they wouldn’t be able to function without her leadership and efforts.

Heller thinks it’s important to have women in the construction industry because they bring a distinctive perspective on how to execute day-to-day tasks, and because they are excellent multitaskers, which she said is important in building. And while she is still sometimes approached differently than her husband, she said that many clients or colleagues are respectful of her 30 years in the business.

Sales is never an easy job. But Kristine Keck has the added challenge of having to walk onto job sites where she is often unwelcome and try to sell supplies to people who might not be sure she knows what she’s doing. But as top grossing saleswoman at the lumber company, she’s proven her mettle.

Keck says it takes humor, charm, and a thick skin to continually approach people who are busy working and would rather not stop to hear her sales pitch. The only advantage to being a woman in her line of work is that people usually refrain from being rude to her. And when trying to get people to listen to you, it doesn’t hurt to show up at a job site pregnant.

“It helped when I was cold-calling to waddle up on the job site,” Keck said. “How do you not give me a few minutes?”

Building those relationships is her favorite part of the job. If you go into it as anything but yourself, the client will see right through you. But that doesn’t mean that there can’t be a different Kristine for each client. She knows which people like to joke around, and which want to stay on task and not waste time.

Her strategies are effective, and over nine years she built up almost her entire client base on her own. And after she does hook those clients, the job is not done. She stays busy doing quality control, managing orders, and trying to stay a step ahead of the project by anticipating needs in the project’s timeline, often spending eight hours a day on the phone with clients.

Keck said that she is constantly underestimated, but she loves when she can surprise people with her knowledge. It was tough starting out, though, because for a client to call her with a question would mean admitting that she may know something that they don’t, which is a tough pill to swallow for a lot of men, she said.

Now that she’s in her current role, she likes to mentor others, like the women who work the retail store counter, where she started out. She coaches them to remember account numbers and to smile when you answer the phone, because people can hear it, and it makes a difference.

And they’d be smart to heed her advice, as Keck has twice won supplier of the year for the Contractors Association of Truckee Tahoe (CATT). The single mother of two will also begin pursuing a degree in communications at the University of Nevada, Reno, come fall. As well as she’s done thus far, she knows there’s always more to learn.

From a young age Kristi Thompson enjoyed playing with legos and Tonka trucks, and had a recognizable eye for design. At 11, her parents even let her create the layout for the family’s new pool and deck, which she calls her “first real-world design project.”

Fast forward a few decades, and now Thompson is a partner at one of the premier architecture firms in Tahoe, with a long list of awards and more than 2,000 projects to its name. Thompson loves that her job involves working with people, and especially helping them. “One of my favorite parts is talking with clients and sussing out what they want, which they can’t even articulate most times,” Thompson said.

She knew from the get-go that this was a male-dominated career; she estimates that only one in every five students at her engineering college at Cal Poly was female. Years after she was in the minority in her classes, she still counts herself as one of the few women running architecture firms in Tahoe, but she also sees a shift happening, evidenced by the fact that women make up the majority of the current MWA staff.

At her job, Thompson enjoys the mental challenge of listening to the “puzzle pieces” her clients give her, and building a design from them.

Even as a partner in the firm, Thompson still faces a lot of prejudices from clients or even others in the industry about her skills. When she shows up on a job site for a meeting, she said people will assume that she is the wife of the owner of the company, rather than his business partner.

“I have a voice and people realize really quickly that I know what I’m saying and they can trust me,” Thompson said. “But I do feel like I have to prove it or else people just assume otherwise.”

Thompson said it is important to have female architects since half of the people who use buildings are female, so women should be designing them as well. In Thompson’s experience, female clients often believe she more carefully considers their needs, as compared to her male partner.

But getting the same networking opportunities as her male counterparts was a struggle as she ascended in the business. For years, she was shut out of a golf tournament that had key players from the local building industry. Vital connections were being made on the greens and she was on the sidelines.

“All of these guys are up there buddying around and networking, and then throwing each other work because they know each other,” Thompson said. “This business is all about who you know, and I wasn’t getting that chance. If we aren’t invited for whatever reason, we’re being held down. We’re not at the table.”

The tournament organizer initially said it was a “boys weekend” and that Thompson’s presence would ruin the event. But finally Thompson got an invite, and she says the new connections helped build her confidence and further her career. It’s important for industry leaders to make sure all staff has ample opportunities, she says, and in her current position, she hopes she is doing her part in supporting up and coming female architects.