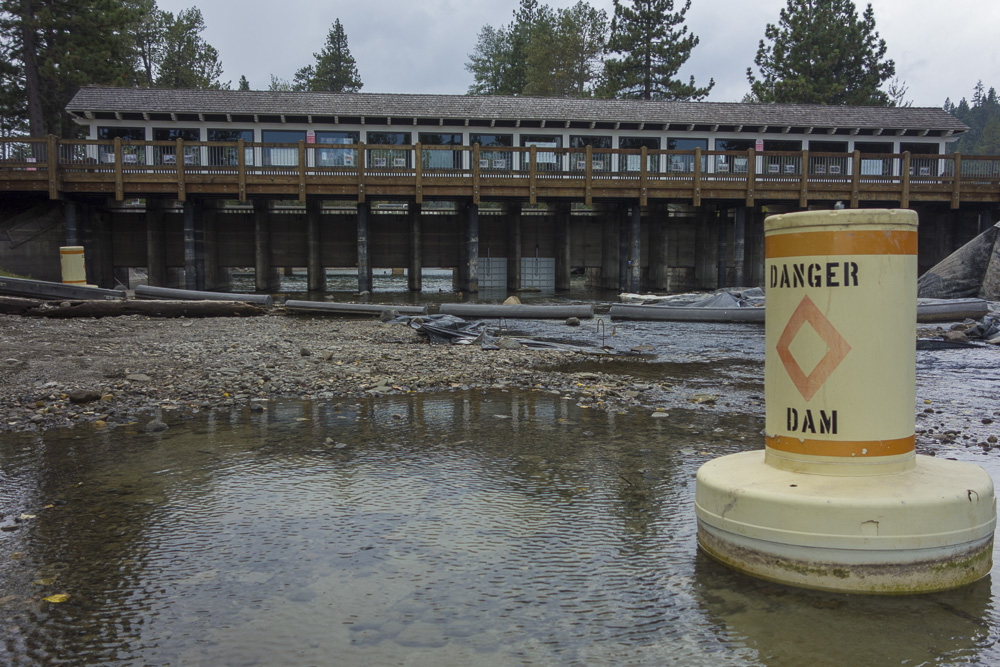 The shores of Lake Tahoe and the banks of the Truckee River are a sad sight these days. As the waters of both have receded due to the drought, beaches have grown bigger — at Commons Beach, the water is so shallow that swimmers can walk to the buoy field before reaching waters deep enough to swim in — and boulders that were normally submerged now glisten in the sun. In some parts of the Truckee River, the water barely reaches ankle height while in others, the river has run dry for stretches, revealing its rocky bottom.

Aside from aesthetics, the drought, now in its third year, presents very real problems for the multitude of agencies and municipalities that rely on the Truckee River for water. Flowing 121 miles from Lake Tahoe to Nevada’s Pyramid Lake, the Truckee River — along with its six reservoirs — acts as a water delivery and storage system for Reno, Sparks, Fernley, and Churchill County. With only a trickle of water coming out of Lake Tahoe since the end of July, downstream water agencies are leaning on drought reserves and groundwater to meet demand, while some have been cut off entirely from water supplies. Although no water officials expect the Truckee River to run dry, they are cautiously watching the skies and praying that this winter delivers what the area so badly needs — precious H20 to fall down on the Sierra in the form of snow.

At the end of September, Lake Tahoe was only a few tenths of a foot away from its natural rim of 6,223 feet. This meant that barely any water — 8 cubic feet per second compared to an average for this time of year of 180 cfs — was flowing out of Lake Tahoe to the Truckee River. Dave Wathen, the deputy federal watermaster in Reno, predicted that by early October the lake would be at or below its natural rim.

“There is no more water coming out,” Wathen said. “From the Tahoe City Dam to the first stream coming in, the river will not be flowing; maybe just some pools.”

The Truckee River system first felt the impacts of the drought at the end of July, when Lake Tahoe was under rim control. On July 31, the lake was .87 feet above the natural rim, and the river, flowing at 172 cfs, was no longer able to meet its minimum target flow of 500 cfs. This rate, known as the Floriston Rate, means there is enough water stored in Lake Tahoe and Boca Reservoir to meet the demands of the many signatories to the Truckee River Operating Agreement. As a result, at the end of July all the signing parties except the top two priorities, the Pyramid Lake Paiute Tribe and the Truckee Meadows Water Authority, were cut off from water from the Truckee River.

“We ran out of storage,” said Wathen. “Those with water rights were not allowed to divert water anymore … We have been out of water since the end of July, early August.”

Although Wathen said 2014 is one of the top five driest years on record, it’s not the first time Lake Tahoe has fallen below the natural rim. Since the federal government began keeping records in 1900, the lake has dropped below the natural rim 20 times (not including this year), including during the drought of 1992 when the lake was at 6,220.26 feet, the lowest year on record. Just like the winter of 1995 ended a seven-year drought, Wathen hopes this winter will pull the area out of its current three-year drought cycle.

“If this were to continue, if we had another dry year, it would be much worse,” he said. “This year at least we made it through July. If there is not a decent winter this year, we might not make it to June.”

The Truckee Meadows Water Authority serves 94,000 customers in Reno and Sparks, and during peak times in the summer uses around 125 million gallons of water a day. With hardly any natural flow currently coming out of Lake Tahoe, and none from Boca, the TMWA is relying equally on its 31 groundwater wells and drought reserves in Donner Lake to meet demand. (The TMWA has owned water rights to Donner Lake since the 1940s and Independence Lake since 1937.) Since mid-August, the TMWA has been drawing 100 acre feet of water per day from Donner Lake, which is the main cause of the lake’s drop of 1 foot per week over the past month and a half. According to Bill Hauck, TMWA senior hydrologist, this is the first time in 20 years that the water authority has had to make releases from its drought reservoirs.

“We haven’t run it this hard in a long time,” Hauck said of the TMWA’s reserves. “We plan for a nine year drought, and this is only the third year, but it’s been exceptionally dry … This is the worst the community has seen in 20 years.”

With 27,500 acre feet of upstream drought reserves, Hauck said that the TMWA is in fairly decent shape for next year. But its fate still depends on a body of water 60 miles away.

“Our water supply goes as Lake Tahoe goes,” he said. “The reason the reservoirs were built was to capture snow runoff and carry-over, but they finally ran out after three years.”

Despite the severity of the drought, the TMWA has not imposed any mandatory water restrictions. Instead, it requested that customers reduce outdoor water usage by 10 percent, which they did by 8 percent during the last two months of summer.

Reno/Sparks residents and businesses may not be feeling the pinch of the drought, but that doesn’t mean farmers aren’t. The Truckee River also feeds the Truckee Carson Irrigation District, which depends on both the Truckee and Carson River to serve its 2,500 water users, including about 55,000 acres of cropland in Fallon and Fernley. At the start of the water season in April, the TCID only had 45 percent of the 225,000 acre feet of water it needed to meet demand. By mid-summer, that water was gone.

“At the end of July, we shut all orders off,” said Rusty Jardine, TCID project manager. “We basically ran out of water midway through the water season.”

According to Jardine, most of the farmers foresaw the coming water shortage and adjusted their crops to less water-intensive ones, like grass and hay, while reducing thirstier crops like corn.

Like farmers, the animals that live in the Truckee River have been through drought before and are able to adjust. Lisa Wallace, the Truckee River Watershed Council executive director, cites the example of fish and reptiles that have adapted to lay eggs in mud rather than water. The eggs can last two to three years until the water returns.

David Lass, the California field director for Trout Unlimited, also stresses that drought is not a rare occurrence in the area and fish find ways to live through it.

“Lake Tahoe went below the natural rim much more often than it does now,” he said. “Fish find shelter in the lake and downstream in pools.”

Lake Tahoe is also not the only source that feeds the Truckee River. Natural springs, other lakes, and 63 streams flow into the river, making it unlikely that the river would dry up entirely. However, sections of the river where there are no tributaries, like the 4-mile stretch between Lake Tahoe and Alpine Meadows, could see extremely low flows.

“It is likely that certain reaches of the Truckee River or tributaries will run dry for periods, but there are many sources of water,” Wallace said. “There is still water in the lakes, and the springs are still running. They are still giving us water supply in the Truckee River.”

The big concern is not so much short-term drought (one to three years) but long-term drought (three to 10 years). According to Wallace, the U.S. Bureau of Reclamation is in the midst of a long-range climate model forecasting what the Truckee River will look like over the next century.

“Preliminary results show that it’s very likely that we will see prolonged periods of drought,” she said. “I’m watchful, but not concerned.”

When the River Stops Flowing
Sports & Outdoors
12:00 am