Home Sections News What in the Natural World? Salmon and Aspens and Bears, Oh... 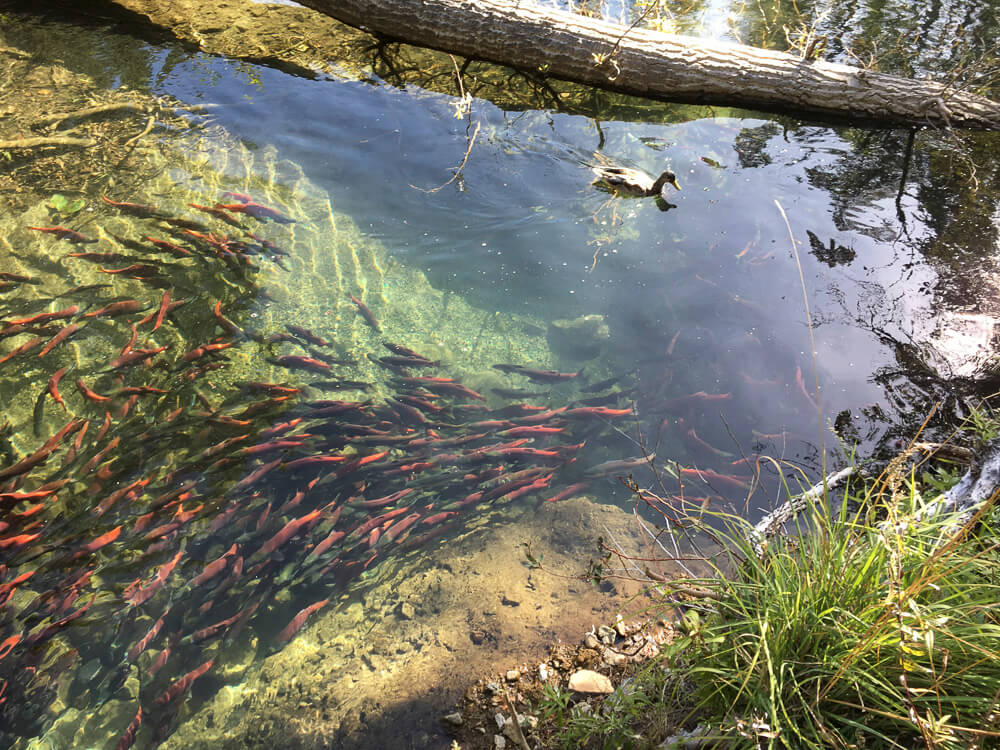 The salmon run at Taylor Creek is a big Tahoe attraction. But given that salmon usually run to and from the ocean — how is it that we have a salmon run in the Tahoe watershed?

Kokanee salmon are a land-locked form of the sockeye salmon, which evolved after events such as landslides, droughts, and other natural occurrences blocked their return to the ocean from various rivers and streams in the Pacific Northwest and Canada. Kokanee are non-anadromous salmon, meaning that they live their entire lives in fresh water. They are much smaller than ocean-going salmon due to limited sources of food in freshwater lakes.

Kokanee were first introduced into California lakes in 1941 in order to provide a suitable game fish that would survive in artificial bodies of water, such as reservoirs with large fluctuations in water levels. Kokanee were raised from eggs provided by hatcheries and transplanted into many lakes in different parts of the state. Kokanee were “accidentally” introduced into Lake Tahoe in 1944 from holding ponds that overflowed at the old Tahoe City Fish Hatchery. Three years after their unintentional introduction, the salmon returned to Tahoe City to spawn and have been spawning in Lake Tahoe tributaries ever since.

The Kokanee in Taylor Creek receive most of the attention, but they have also been spotted in the Upper Truckee River, Meeks Creek, and streams on the north shore of Lake Tahoe. A new boardwalk on the Rainbow Trail at the Taylor Creek Visitor Center allows visitors to view the Kokanee from a beautifully constructed platform above the creek. It was made possible through donations from the Tahoe Fund and Tahoe Heritage Foundation, and was constructed in coordination with Generation Green of Lake Tahoe, Great Basin Institute, and the Youth Conservation Corps.

The aspens seemed to be delayed in turning color this fall. Was this true? Was it related to the wet winter? Or, I’ve heard that caterpillars are the culprit.

The changing of leaf color in aspens and other deciduous trees involves several factors, but the dominant factors are sunlight and heat. Since temperatures tend to drop sooner and sunlight fades faster in more northerly locations, the progression of fall color changes tends to move from north to south across North America, typically from mid-September through mid-November. In that respect, aspens in the Lake Tahoe Basin were right on schedule.

Drought, particularly if severe or extreme, may cause colors to appear sooner in the season and the colors may appear dull and muted. In response to lack of water, trees prematurely create a sealing barrier between the branch and leaf stem. While this stops the production of chlorophyll (the chemical that gives leaves their green color), it also triggers an early shutdown of leaves, which means leaves may drop before they’ve had enough time to fully change color. So fortunately, our wet winter likely put Lake Tahoe aspens’ color display back on track.

What about those caterpillars? Recently, the northeastern shore of Lake Tahoe experienced an increase in white satin moth populations, which causes trees to drop their leaves prematurely. The Lake Tahoe Nevada State Park has suffered heavy defoliation from these non-native moths, which feed on aspens, cottonwoods, willows, and other deciduous trees — though they tend to prefer aspens. Trees in areas with satin moth infestations likely lost their leaves early, before they had a chance to turn color. Though trees are able to grow new leaves in the same season, continued defoliation can weaken trees and lead to long-term damage or death.
The Nevada Division of Forestry is asking the public to alert them if anyone observes areas with white moth infestations. Contact Gene Phillips, a forest health specialist, at 775-849-2500 ext. 241.

I don’t know. I’ve seen bears get into cars that were locked and I’ve seen bears get into cars that were unlocked. Just like anything else, your locked car is by far the best option. We have a lot of incidents where we see a bear and a car parked on a hill and the bear opens the door, gets in, and the doors close behind him. It’s actually totaled at that point. They tear the inside of the car out. We’ve seen many incidents where the car is totaled.

What in the Natural World? Salmon and Aspens and Bears, Oh My!
12:00 am

What in the Natural World? Salmon and Aspens and Bears, Oh My!
Sports & Outdoors / Wellness