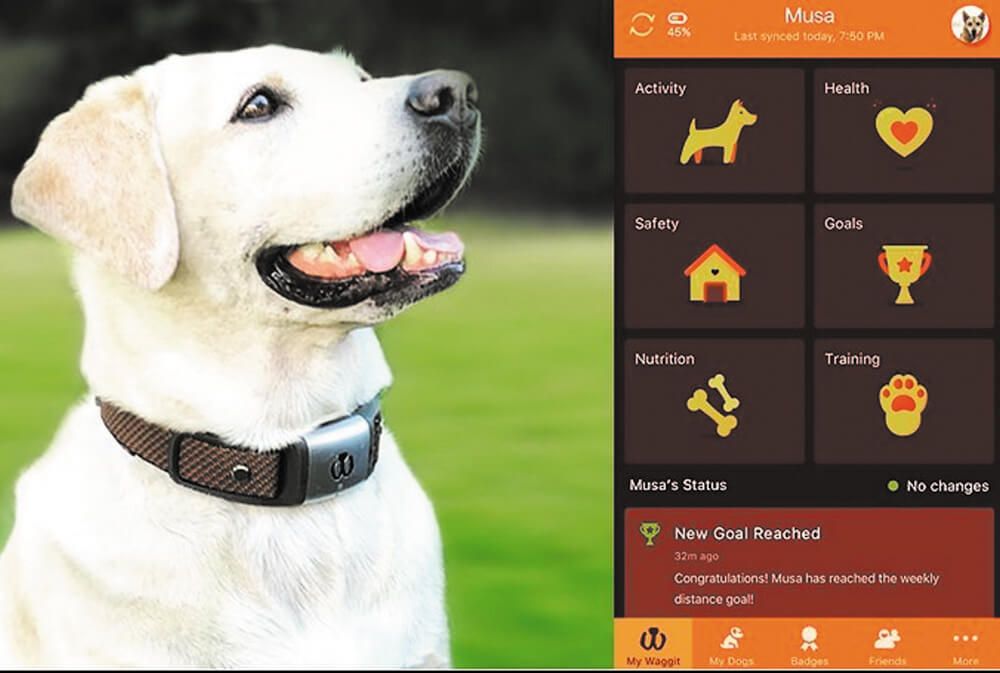 When most people think of Tahoe-based companies their minds immediately go to the service or outdoor industries; rarely do they think of tech and app development. This is most likely because Silicon Valley, the mother ship of tech, is only 220 miles down the hill.

Well, the times they are a-changin’ (see p. 14) as two start-up app companies are calling Truckee/Tahoe home. LARKR, an on-demand mental health care app, is based in South Lake Tahoe, and Waggit, a high-tech collar for dogs, is based in Truckee and Boulder, Colo.

Interestingly, but not surprisingly, based on the lifestyle offered by the region, both start-ups fall into the health and wellness section of your app store — one just happens to cater to humans, while the other is looking out for our furry, four-legged companions, which, let’s be honest, will help play an important role in our wellbeing.

A FITBIT FOR DOGS

A dog had Susan Sierota, co-founder of Waggit, laughing out loud during what she describes as the lowest point in her life.

Having gone through multiple back surgeries, Sierota often needed help walking. One day, she was crossing the street with her dog and fell to the ground. Her dog Mulligan came to her aid and attempted to walk on his hind two legs to help Sierota — he was mimicking how he had seen her friends help. Obviously Mulligan was unsuccessful in assisting Sierota, but the simple gesture was enough to turn around what could have been a really emotional situation.

She explained that dogs often hide their pain until it is entirely unbearable, which usually means costly vet bills that could have been avoided if problems were caught earlier.

Waggit is a collar and app that brings wearable health technology to dogs. Sierota described the product as an Owlet Baby Care monitor wrapped in an Apple Watch.

The first step in development for Waggit was to assemble a team. Sierota, who previously worked for Procter & Gamble, Coors Brewing Company, and Peet’s Coffee before opening CrossFit Jibboom in 2012, reached out to past co-workers when assembling her team. Carrie Davis, Waggit’s co-founder, has known Sierota since working at Coors — since then, Sierota has brought Davis with her on every job change, and Waggit is no difference.

Next, the team had to decide on Waggit’s specific features, and so they reached out to Colorado State’s College of Veterinary Medicine — the most renown animal cancer center in the country and the second best veterinary school — to ask what information was most important to consider when tracking the health and vitals of a dog.

“It is a lot cheaper than pet insurance,” Sierota said. Waggit needs only four days to set a baseline for a dog’s vitals and then alerts the pet owner of any change that may warrant medical attention.

For example, if your dog’s baseline heart rate was found to be 100 beats per minute, but you were on a strenuous mountain bike ride, you would be able to track if you dog’s heart rate reached a dangerous high.

However, Waggit does have additional features such as a virtual fence and a tracking device. “It is a shock collar without the shock,” Sierota said.

The former works by allowing users to set a radius on a map, and if the dog steps outside the radius the collar makes a noise — this features requires human training but is a more affordable and mobile option than Invisible Fence.

Lastly, the information gathered by Waggit is extremely valueable for dog research. Dogs are so nervous when they go to the vet, Sierota explained, that it is difficult to get a good baseline, and therefore very little research on dog vitals exists.

“Our goal is delivery on happy, healthy, and safe. Rather than just safe,” Sierota said.
On Demand Mental Health Care
LARKR, a mental health care app that launched on Oct. 16, was founded by husband and wife team Shawn and Chris Kernes. Shawn is a former chief technology officer at StubHub and Chris a licensed marriage and family therapist. The couple have owned property in South Lake Tahoe for 10 years, but only recently moved to the lake full time.

“If you look at Tahoe, it is such a great place to promote wellness,” Chris said. “It attracts highly motivated individuals … Tahoe promotes physical wellness and that is tied into metal health.”

LARKR is different from other mental health apps because they offer immediate response — think Uber for therapy. The customer answers a few questions on the app and is then immediately assigned a licensed mental health professional who specializes in the area they are seeking counseling in. To date, therapists are available in California, Nevada, Hawaii, Texas, Florida, Connecticut, and New York.
But, why Tahoe? The couple has a laundry list of reasons for choosing South Lake Tahoe as the headquarters for LARKR — everything from our long distance to a major city where mental healthcare might be accessible 24/7, to the region’s promotion of physical wellness.

Chris brings up an interesting point in that, because there are few service providers in the area, one is bound to run into one’s therapists at restaurants and grocery stores, which could be awkward, LARKR makes this sort of interaction less likely.

LARKR can also help mental health professionals living locally subsidize their business in the slow seasons because it allows those enrolled to support multiple clients at different locations. In other words, if you were a family therapist based in Truckee, but found that business was slower in the fall, you could enroll in LARKR and pick up additional clients from all around California to make-up the lost income.

“When I learned of the massive void leaving 60 percent of the 50 million Americans who suffer from mental illness without care, I felt compelled to create a practical and effective solution,” Chris said.