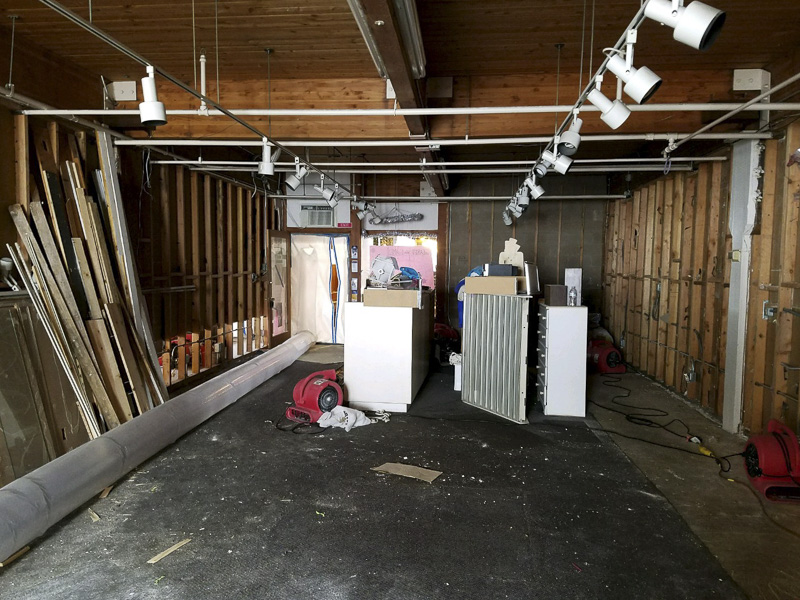 When General Manager Jeff Hill walked into Jake’s On The Lake on the morning of Jan. 8, the sound of falling raindrops echoed through the restaurant. But it wasn’t pitter-patter from a storm outside. It was the sound of rushing water coming from inside the restaurant, a literal indoor torrential rainstorm in the middle of the almost 40-year-old restaurant that has long been one of Tahoe City’s favorites.

Snowpocalypse. Januburied. Snowmageddon. These were some of the nicknames given to last winter. The severity of it shocked even the most seasoned locals. But some businesses were dealt a lot worse than an increased shoveling load and the occasional power outage. At Boatworks Mall on the lake in Tahoe City, a number of businesses sustained substantial flooding, shuttering them for months. It was a hard-fought battle to renovate and reopen, but after months in the dark, these businesses are now thriving once again. Thanks to the tenacity of the owners, managers, and employees, as well as the unwavering support of the community, they are ready to take on another Tahoe winter.

Hill said he noticed a small crack in a wall on the night of Jan. 7, and made the decision to not open the restaurant the next day until they could figure out how serious the damage was. When he arrived at work the following morning he found flooding on three levels, and an unrequested waterfall feature in the middle of the dining room between the kitchen doors and the wooden bar that Tahoe locals and visitors have bellied up to for almost four decades.

At the other end of Boatworks Mall a similar situation was unfolding in Geared for Games, the toy store that has been a Tahoe City staple for 20 years. Owner Carol Hester said that when she arrived on Jan. 8, she found her toy store immersed in two inches of water, with more dripping down the walls on every side of the store. Hester was shocked because she had even taken precautions against flooding, which was thought might come from the parking lot, by sandbagging the doors at the front of the store, a second line of defense after the sandbagged entrance to the mall.

“They had to tear out the carpets, the walls, literally, I was down to studs and concrete,” Hester said. “It was definitely a shocker. That was a perfect storm that came in, rain then snow, then rain then snow, something we haven’t seen in eons.”

Two other businesses in the mall, Tahoe Shoe & Clothing Co. and the Museum of Sierra Ski History and 1960 Winter Olympics, were also damaged by the flooding. Though both reopened after the flood, the owners of Tahoe Shoe & Clothing Co. are retiring, and their store will close this month. The ski museum sustained significant damage, said co-founder Stan Batiste, but luckily the damage was only to the walls and floors; the thousands of priceless artifacts the museum houses remained dry due to the founders’ foresight to seal them all against potential water damage.

The museum operates almost entirely on donations, and the space inside Boatworks Mall was provided rent-free five years ago. But after the storm, the landlord announced that in order to continue using the space, it would need to do the repairs on its own dime, an undertaking the museum could not afford. The museum was offered a space in the Gatekeeper’s Museum, which it moved into in mid-September.

Geared for Games was closed for almost three months, a lengthy hiatus that Hester said was obviously a financial hit for the business. Besides the loss of revenue, Hester lost $10,000 worth of inventory, and construction costs amounted to about $25,000. Though her store’s insurance covered the majority of the renovations, she did have to pay out-of-pocket for a portion of the repairs. The landlord’s insurance did not contribute at all to covering her costs, she said. But even when it reopened in March, the store didn’t immediately bounce back. Geared for Game’s fate was tied to that of Jake’s On The Lake, which was still closed, limiting foot traffic in the mall, and leaving Hester still behind her usual sales numbers.

Jake’s On The Lake remained closed for four and a half months in order to repair the extensive damage. For many weeks, Hill recounted, he and the owner of Jake’s, Chris Thibaut, were immersed in the overwhelming experience of figuring out how to navigate the repairs. Hill and Thibaut had to quickly learn how to work with the landlords, the insurance company, and other players.

Getting the restaurant ready to open came down to the wire. “We were putting the last tack in the carpet five minutes before we opened,” said Hill. When Jake’s reopened one week before Memorial Day weekend, Hill said that the restaurant was swamped, and Jake’s had a record-setting summer, which definitely helped soften the blow of spending the winter out-of-order. And while the gaggles of tourists that flock to the lake in the summer contributed to that success, Hill said the local community never stopped supporting the restaurant.

“We were on the forefront of the community’s minds,” Hill recalled. “All of our guests walking through the door, there was a connection because they knew what we had gone through.”

Hester felt similar support from the community, from the strangers who helped her rush to clear inventory out of the store as it was flooding to the customers who showed their appreciation when she was able to reopen.

“It’s great to live in a community like we do where everyone really does care about each other,” Hester said.

While neither Hester nor Hill would ever wish for another situation like last winter’s flood, there were certain silver linings. Both businesses received a face-lift. For Geared for Games, that meant new hardwood floors, new walls, and new displays for the toys and games.

“We went from 20-year-old carpet to a nice wood laminate flooring. It looks very pretty,” Hester said. “We took the opportunity to spruce it up and it’s looking fresh and new.”

As part of its repairs, Jake’s entryway was completely redone, new carpet and hardwood floors were put in throughout the restaurant, every crossbeam and post was refurbished, and all the mahogany upstairs was restored or replaced.

Another upside, Hill said, is that Jake’s insurance policy paid all its employees for the entire time that the restaurant was closed, which meant the restaurant’s management  could take sufficient time to tackle the hefty renovations. Hill said this fostered a sense of family, loyalty, and responsibility between the employees and the restaurant.

“I think through adversity people become connected,” Hill said. “Because we went through this, I think [our employees] worked so much harder this summer. It was like ‘Hey, they took care of us when we were down, and we gotta make sure that Jake’s is coming back out on top.’”

Hester said her insurance company only covered 60 days worth of wages for her employees, which played a large part in dictating her timeline for repairs.

“I tried to get up and running as soon as I could for my employees,” Hester said. “For many of them this is their primary job and this is how they make a living. I didn’t want them to be out of work for months and months.”

Looking forward, Hill said that he is ready for a break following the record-breaking summer. And while he doesn’t fear another incident like last winter’s flood, he knows better than to underestimate the forces of nature.

“Being in the mountains, we’re at the mercy of the elements,” Hill said. “Mother Nature is really in charge. But I feel certainly like I know how to navigate a problem like this again, and I hope it doesn’t happen ever again.”

The future holds even more changes for Geared for Games. Hester’s daughter will soon be taking over the business.

“I’m looking forward to a new era at the toy store, where a younger generation gets involved with new, fresh ideas, new activities, new products. It’s fun to pass the torch down,” said Hester. “Not only is the store fresh, but we have a new management team with fresh ideas and enthusiasm.”