Getting anywhere around the lake can be a daunting task on summer weekends. When you’re moving so slowly in a car that cyclists are whizzing by you, all you can do is crank up the radio and settle in for a long ride.

As a growing and changing population in Tahoe presents new problems, local agencies are pursuing new technologies to help them better understand our community and its needs. High-tech data collection methods, like those currently being used by the Tahoe Transportation District (TTD) and the Town of Truckee, can reveal trends that were never before quantifiable, and help track compliance with town rules that were previously too difficult to enforce. 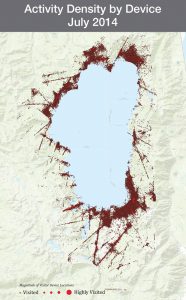 TTD seeks to make traveling to and within the Basin more efficient and enjoyable. It is now using cell phone data to gather information on where visitors come from, how they enter the Basin, and where they go when they are here.

“That’s not a level of detail we’ve been able to have before,” said TTD Manager Carl Hasty. “It’s been eye-opening to understand and see a little bit more about how the region is accessed and used. It’s given us more insight into what we need to do to build a regional transit system, to provide an alternative for folks to get here and get around other than in their car.”

Previously, the best data-gathering methods available to the TTD were license plate surveys and traditional person-to-person surveys, Hasty explained. License plate surveys told the TTD where visitors were entering the area, but did not give any more details about where they went when they arrived or where they came from. The district could also go to trailheads and other crowded destinations to survey people individually, but it is a time-consuming and expensive method of data collection, he said.

Now, the transit district has spent $80,000 to purchase cell phone data that gives “more robust” insight into traveler information than it ever could attain before.

Hasty assured that the TTD does not have access to personal information, or even demographic details, for the data it received. What it does show is each trip taken by people in the Basin; it can see where people travel to and at what times. This will help the district discern where the most popular areas for recreation and housing are, and determine the best course of action for improving transportation corridors, he said. The data it purchased covers three full months — February, July, and August of 2014 — so the agency has samples of data from peak tourism times in winter and summer.

From this new data set, the TTD has determined that the average daily population in Lake Tahoe is four times the permanent residential population, with the highest numbers in the summer. In February, July, and August of 2014, there were 11.8 million, 10.8 million, and 4.7 million monthly visitors to the region, respectively. The TTD projects that annual visits will increase up to 20 percent over the next 20 years.

The TTD has a 20-year vision for the area that it hopes to apply this data to, Hasty said. It wants to get more cars off the road, and use public transit to serve a broader population, namely tourists. Included in that vision is a possible cross-lake ferry, from South Lake Tahoe to Tahoe City. From there, people could connect to bus routes to get to popular areas around the lake. The agency is also researching different transit methods that could bring people into the area from San Francisco, Sacramento, and Reno, and encourage them to leave their cars outside of the Basin when they visit, like a park-and-ride system. The option to remain completely dependent on public transit during a trip to Tahoe is virtually unavailable currently, but the TTD has received strong public interest in creating such a method, Hasty said.

“Data like this starts to offer a new alternative that is richer in the data set, in cost effectiveness, and maybe it’s something we can do a little more often so we can really start to understand who is coming here, where are they going, what are their needs and how can we serve them,” said Hasty.

The Town of Truckee is also using technological advances to enforce laws dealing with short-term vacation rentals. The municipality signed a contract with San Francisco-based start-up Host Compliance to ensure that all short-term rental homeowners in the area are paying their Transit Occupancy Taxes.

Short-term renters — visitors who stay less than 30 days — are required to pay a TOT tax, which amounts to 10 percent of their rent costs. Town of Truckee Administrative Services Director Kim Szczurek said that since visitors use town resources and amenities, it’s only right that they contribute to the upkeep of the town.

These taxes go to the Town’s General Fund. They are used for things like emergency services, road and park maintenance, and snow removal.

Of the more than 13,000 homes in Truckee, the town estimates that half are second homes. Currently, 1,250 homes are registered with the town as short-term rental properties, and in 2015 the town took in $2.7 million in TOT taxes.

The town has always had a laissez-faire attitude about these rules, and relied on people to self-register and be aware of the tax, said town manager Tony Lashbrook. Traditionally, homeowners have listed their homes through vacation rental agencies run by professionals who know the local laws. Now, with the advent of websites like VRBO and Airbnb, people can rent their homes on their own. But many either don’t know to collect and submit TOT taxes, or they ignore the law.

“There’s a lot of concern in the community that the playing field is not level,” said Szczurek. “Everyone needs to be collecting, or [some rentals] cost 10 percent more.”

The problem for the town is how to reach those owners, said Szczurek. Listings on these websites do not include addresses; you must complete a transaction to get the address of your rental. The companies behind these sites do not want to give out the addresses to municipalities, citing a conflict with the privacy that they promise to their clients.

“We knew that we may be missing people, but we didn’t have a good way to find them,” said Szczurek. “That’s where Host Compliance came in.”

Szczurek and Lashbrook are hoping that Host Compliance will help them with this obstacle. The start-up will use a method called geospatial data mining to determine the address of a rental in an online listing. It will then check it against the town’s database of registered homes to see if the homeowner is in compliance with TOT laws. The town signed a one-year, $70,000 contract with the company, that Szczurek said has a “money-back guarantee.” Contracting out is a more economical option than attempting this analysis in-house, explained Lashbrook. The information will be found more quickly and with less effort than having a dedicated person on staff to do the legwork that would be required without the technology.

“Frankly, I think the way I’m wired, I’m hopeful that we’ve got the majority already. I like to think the best about people,” Lashbrook said. “I think we’re in the ballpark. But this is an appropriate check-and-balance to make sure the outliers are playing by the rules.”