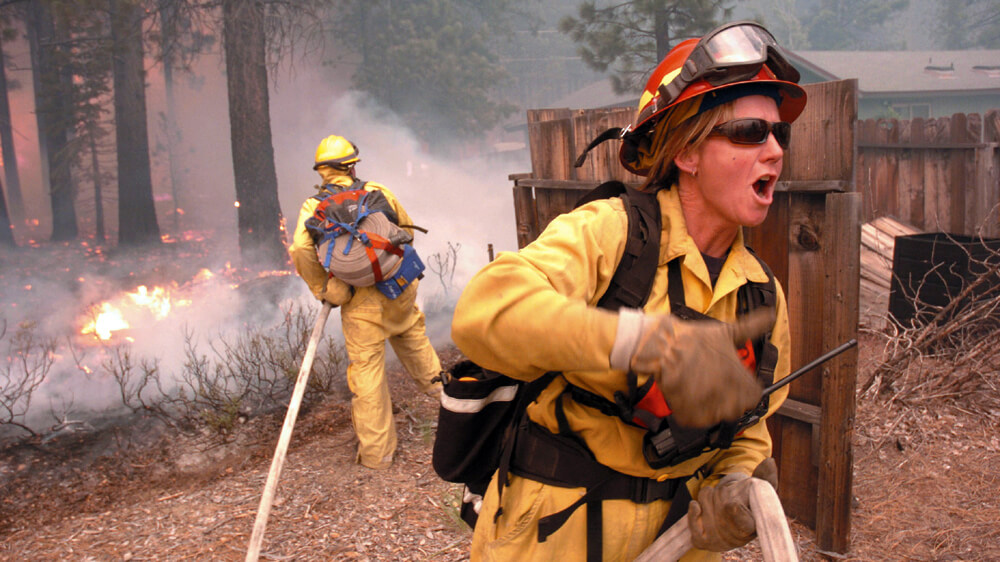 Last September’s King Fire, which threatened the Tahoe Basin, cost more than $150 million to fight. The Angora Fire burned more than 250 homes in South Lake Tahoe in 2007, and cost more than $160 million. Graham Kent, director of the Nevada Seismological Laboratory and professor at the University of Nevada, Reno, says that while those fires were devastating, they are like a 5.0 on the Richter scale of fire events. To prevent fires from causing widespread damage in the Basin, Kent started AlertTahoe.

“What happens if we get a 7.5 fire inside the Tahoe Basin? Everything would be lights out economically. It would take billions of dollars to restore it,” said Kent. AlertTahoe aims to prevent that disaster by installing a series of high definition cameras throughout the Basin, which are used to locate fires before they become catastrophic.

Kent, a South Lake Tahoe High School graduate, nearly lost his home in a 2003 fire near San Diego. He said it was the combination of that event and the realization that the private wireless network already in use at the Nevada Seismological Laboratory could help prevent other cataclysmic fires in the future, which set him on the path to create AlertTahoe’s network of cameras.

The cameras can collect data in real time 24 hours a day from multiple sensors. They operate on the Nevada Seismological Laboratory’s high speed network that is not vulnerable to disruption like the collapse of the cell phone network, which often happens during a disaster.

The first cameras were installed in 2013, and there are now four within the Tahoe Basin — above Tahoe Cross Country Ski Area in Tahoe City, Snow Valley Peak on the East Shore, Homewood on the West Shore, and Angels Roost above South Lake Tahoe — with a fifth to be installed soon at Sierra-at-Tahoe ski resort.

The goal is to have 20 total cameras installed, with five more this year, and the remainder in 2016. The AlertTahoe system costs $2 million, and the Tahoe Prosperity Center is raising $750,000 to place 14 more cameras in the Basin. While fire agencies in other states utilize private cameras near urban areas, it is the expansion into remote areas that is unprecedented.

“We can’t afford to lose the Basin. The Angora Fire was an easy fire to catch. All fires are going to be easier [to catch] with a camera system,” Kent said. “I know [firefighters] would have gotten there hours earlier if we had this camera technology back then.”

To date, the existing AlertTahoe cameras have prevented five fires in the Lake Tahoe Basin from getting bigger than an acre. One fire on Spooner Summit was detected by someone who glanced at his computer while at a meeting in Fresno. The cameras are closely watched by various fire agencies, but private citizens can also do their part to prevent a catastrophic fire by visiting the AlertTahoe website, and then reporting any fires seen by calling 911.

North Tahoe Fire Protection District Fire Chief Mike Schwartz is a big fan of the cameras, which he uses on a regular basis to spot fires and help make decisions on how to fight them. On July 4, he received a report of smoke and quickly found the exact location of the fire. Firefighters were able to contain the fire to just a quarter of an acre.

In addition to finding fires, Schwartz noted the AlertTahoe cameras’ time lapse technology is a key tool in making judgments on how to appropriately fight the fire.

“It is the best predictor of future behavior. It gives you the opportunity to get an educated guess on how to fight it,” Schwartz said. “I can cancel aircraft early or call them early, and make a really informed decision.”

How the Public Can Help

Those involved are urging the public to be part of the effort to save Tahoe’s forests.

“We have spent hundreds of millions of dollars to clean up and protect the clarity of Lake Tahoe. But if we get another devastating fire like the King Fire, it would devastate the community, the environment, and the economy,” said Heidi Hill Drum, executive director of the Tahoe Prosperity Center.

Hill Drum said the Incline Village-based Tahoe Prosperity Center, an economic development organization for the Basin, decided to assist in the effort after Kent attended one of the group’s board meetings and showed the connection between the future of the Tahoe economy and the fire cameras.

The AlertTahoe system has received funding from the United States Forest Service, the California Tahoe Conservancy, Heavenly Valley Ski Resort, Homewood Mountain Resort, and the Nevada Seismological Laboratory/University of Nevada, Reno, but they are now looking for assistance from the public.

“It’s about business resiliency. It is a preventative measure that could help the community and the economy,” Hill Drum said. “The King Fire smoke in the Basin last year hurt the economy, as did the road closures on Highway 50 from the Kyburz Fire [this year]. Who knows what fires we might be able to stop [with these cameras].”

To see the cameras in operation, visit alerttahoe.seismo.unr.edu. To donate to the AlertTahoe effort, visit tahoeprosperity.org.

Using Cameras to Save Lake Tahoe