Home Columns In the Past Ursus Horribilis 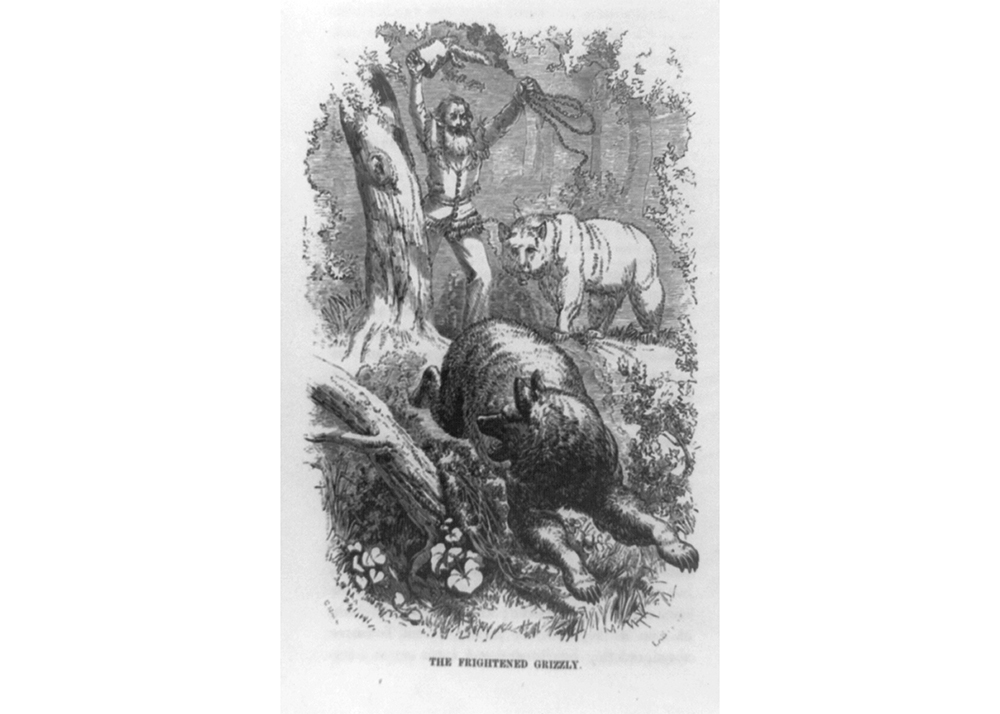 With mild weather finally upon us, I’ve seen lots of signs of the large, four-limbed, furry residents of the North Shore. Our only native California bear these days, a member of the species called the black bear, is busily out and about.

This species name “black bear” confuses some people who don’t see him as often as we do. A black bear can be, and often is, cinnamon-colored, brown, black or any of the above with blond highlights. There’s another bear species, though, called the brown bear, or grizzly – an aggressive meat-eater who was driven from California decades ago, but still lingers in local lore.

Before the 19th century Gold Rush, the California grizzly, a brown bear also known as ursus horribilis, or terrible bear, numbered around 10,000 in population. The grizzly often had silver or blond tips on its fur as well as massive paws, and claws that grow up to five inches long. It is depicted on our California flag. Before we were the Golden State, we were the Bear Republic due to the large number that lived here.

A Truckee Republican newspaper article of 1872 gave much print to a terrifying bear that became legendary here. “Ol’ Brin,” as he was known, was a huge grizzly named for his brindle coat. According to lore, this bear roamed the eastern Sierra Nevada killing sheep, cattle, and horses. Legend says he maimed and possibly killed men. A trapper succeeded in catching him in a fifty-pound steel-jawed trap, but the bear simply tore it apart, losing two toes in the process.

In the article, a local hunter spoke of an effort to gather hunters to chase down Ol’ Brin, saying, “I don’t know why you’d go after him. I hope to never see him again.”

Meanwhile, stories of other bear encounters around the west enhanced Ol’ Brin’s reputation.

In November of 1872, John McKinney and Lew Huntington were hunting with their dogs near Tahoe City when they took a shot at a bear that happened by. They fired twelve times with buckshot and a rifle. The bear did not run as expected, but charged, and was within twenty feet of the men when the dogs tackled it, giving Huntington time to fatally shoot it in the head. Sadly, one of his dogs was killed by the same shot. The grizzly weighed more than 700 pounds. “The dogs saved us from its clutches,” said McKinney. The bear, however, was not Ol’ Brin.

A story in the October 1872 Pioche Record describes local loggers near what is now Boca Reservoir who were chased off by three grizzlies while logging. They returned the next day with a “bear gun.” After they fired the gun, all three bears were dead, two of the men were injured, and a brush fire started that burned for days. Apparently that bear wasn’t Ol’ Brin either.

The Republican of 1873 reported that Ol’ Brin took up residence at Webber Lake, (now recently opened to the public by the Truckee-Donner Land Trust). “Hundreds of shots have been fired at him, with no apparent result except to arouse his ferocity and endanger the lives of those who fired upon him. Ol’ Brin never yields the road, nor runs from anything the shape of the human species,” The Republican reported.

Eventually, some hunters in Carnelian Bay put together a hunting party to find and kill Ol’ Brin. Though they looked for him for four days, one quote says they were too busy drinking liquid courage to ever find him. Others say they never even intended to run into the old silverback, “You might get scalped-or worse.”

Though the grizzly lives on in other Western states and Canada, the last California grizzly was reportedly killed in 1924. Grizzly bears were wiped out in Oregon, Nevada, and Mexico around the same time. Now, almost every legislative session includes an effort to reintroduce the grizzly to California.

One of my wife’s favorite bear stories takes place late one night. I had forgotten to bring the trashcan in. I threw my robe on and trudged out to the driveway. As I sleepily rounded the corner to the garage, a large black bear and I both jumped straight into the air and shot like bullets in opposite directions. I ran into the house, where my wife leaned against the doorway, laughing so hard she could not breathe. The bear fled across the road into the woods. I now pay much closer attention when I go out at night, as much to avoid my wife’s teasing as to avoid the bears.

Though I wish our forefathers had not killed them all, consider how much different a camping trip or a walk out to the trash can at night might be if Ol’ Brin still ruled the Sierra.