Home Sections News Underneath the Gore-Tex 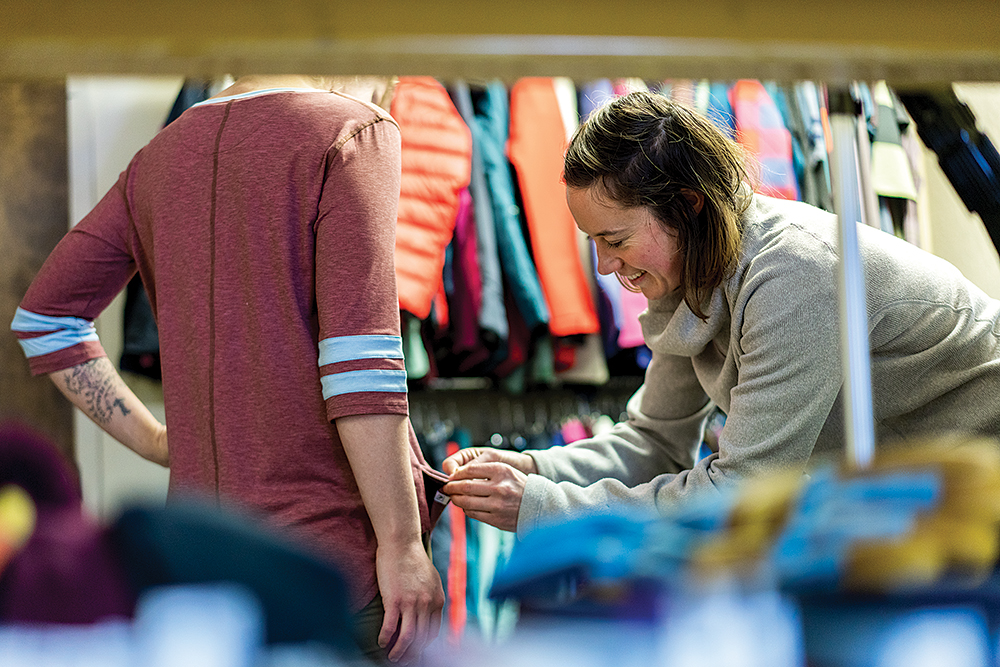 In a remote mountain town such as ours, finding the opportunity to make a living can be rough. But if you’re really lucky, sometimes you get to not only chase that dream job, but also find one that blends work and play. Here are the stories of two local ladies with the inside scoop on the athlete-driven outdoor industry in the Basin, and how they balance shop days and powder days.

This 31-year-old mountain biker/skier was living in Jackson, Wyoming, when a job opportunity arose in Tahoe’s outdoor industry. Haskin soon traded eight years in the Teton Range for the Sierra Nevada and began working with the creators of outdoor clothing brand Flylow, Greg Steen and Dan Abrams.

In Jackson, Hayssen worked in public relations, doing a job also involving product design and development. She knew the outdoor industry was small and to break in she’d have to build connections. The owner introduced her to Dan and Greg, and when they later needed someone for the design team, they invited her on board. She’s now been the “other half” of the development team — which also includes founder Greg — for about eight months.

“Greg and I do everything, from about half of the operations and production/delivery to all the designing and the go-to-market merchandising,” she says. Some days, “designing” means researching the best fabric to use for an item, other days it’s picking colors and matching them with threads, and sometimes it’s having real-life active “models” in the office to try on gear and give feedback. 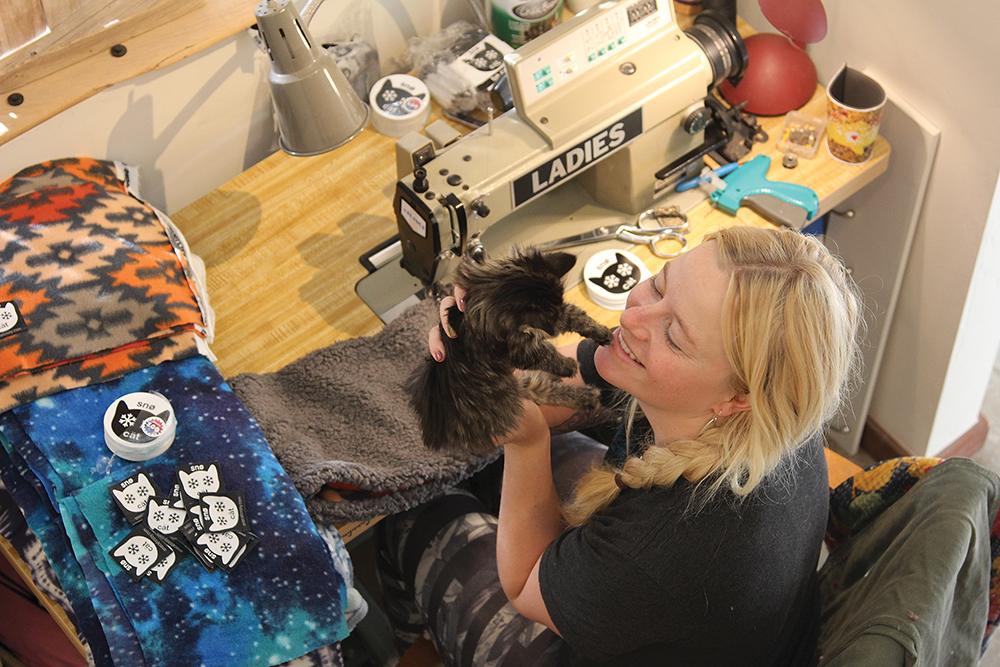 It’s a dream job Hayssen says was not hard to land once she got connected, but at first took a lot of diligence to pursue — not to mention many years of resume building. One huge payoff includes being able to live and work in the mountains.

“I can’t imagine not living in a ski town, so I would never take a job that didn’t allow me to go on a bike ride at lunch or leave a little early to catch the last hour of light,” Hayssen says of her position. While some tend to think her design job is just “playing with colors,” she notes that although Flylow is not necessarily a small business, the tight-knit feel of the team allows Haskin to see all the finer points of the business and has immensely expanded her skillset.

Operating under the motto “independent, homegrown, mountain raised,” there is a brand loyalty for Flylow extending across the Cascades and found throughout the West, Hayssen explains. Everyone is wearing Flylow in Jackson, Alta, and Salt Lake City. This recent success, in part, is due to the “millennial” buying pattern where people are saying, “I want to know the company. I want to buy from a company that embodies the ideals I believe in.”

Given that trend, Hayssen and others in her field have questioned why more outdoor industry businesses aren’t operated in mountain towns, making products and jobs more available to others like herself, so they can work and play here, too.

Amory Harris’ neck warmer business was born out of a sudden necessity: What could she stitch together quickly as an emergency neck warmer while racing out of the house to go ski? Today, chinchilla fleece-lined “cozies” in cute patterns can be found on her website snocatcozy.com, at Mount Rose, and soon in other local ski shops. A portion of the proceeds also benefits kitten rescue organizations, a personal passion of Harris’. 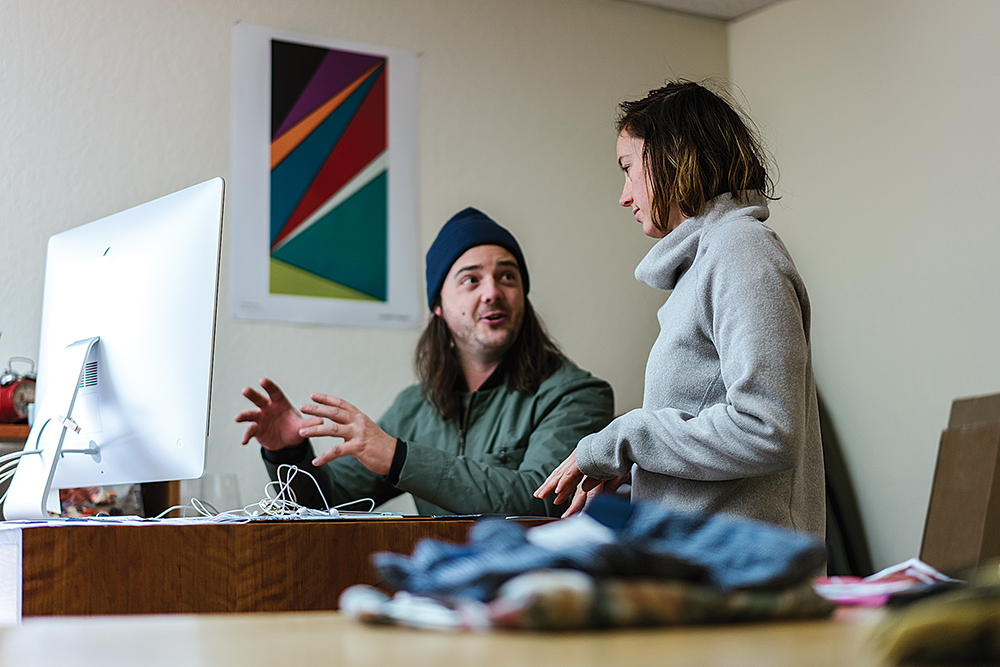 The cozy garments are made in a small workspace in her house in Truckee, during her spare time between playing outdoors and working in the media department at Mount Rose Ski Area.

“I haven’t seen anything exactly like this in stores, so I wanted to see what I could do with it,” Harris says. “I have two degrees in marketing and I love branding, so I had a day off and spent the day making a logo, then a website, then saying ‘okay, this is a thing’.”

As an avid skier, fisher, mountain biker, and boater, Harris came up with a product that was not only warm, but versatile and outside the aesthetic norm. She explained that a lot of technical gear comes with fancy terminology and expensive fabrics, which makes them seem purchase-prohibitive to some consumers.

“I wanted to just make it stand out a little more,” she says. “It is a piece of gear you can wear skiing in a giant storm … but not something you have to feel like you know what you’re doing to wear it.”

Harris designed the brand with “cheeky language” to represent her flair, and a website that reads: “Inspired by the innate love to be warm and cozy, shared by every cat. Brought about by videos of blissful kittens snuggled up to warm Himalayan sea salt lamps. Made for windy days on the hill and people who want to wear something cooler than the basic, black balaclava sported by every Jerry and their mother alike.”

The neck warmers come in a variety of prints, the most popular of which are camouflage, watercolor, and tie dye. There are numerous varieties of cat prints available, too. The availability of those prints and the cost, Harris says, are determined by living in a mountain town where supplies are more expensive.

She’d like to see the brand expand, but it would quickly outgrow her workspace and she’d have to hire someone — something Harris says she’d be willing to investigate but would never want to outsource.

Plus, Harris still balances time between business ownership and another full-time job.

“Sometimes I get a little stressed out because when I get home from work, I want to hang out and not work … I find myself doing this on my days off,” she says. “If I want to go away and I have stuff to do, I keep thinking about it.”

Underneath the Gore-Tex
Arts & Culture / Event Type
12:00 am