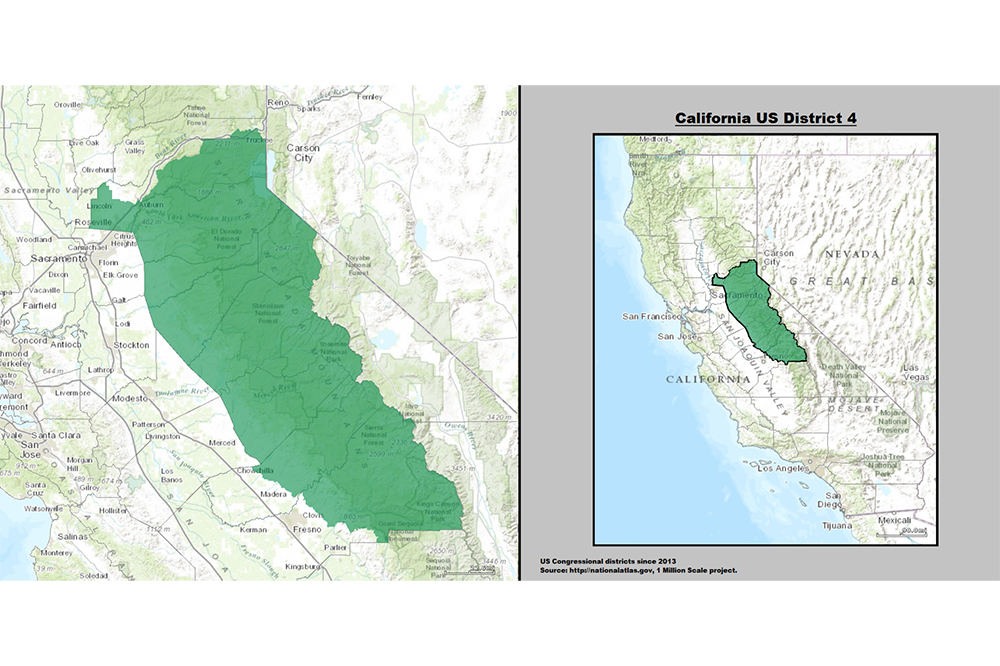 Correction: The number of Independent voters referenced in this story refers to members of the American Independent Party. As of April 2018 the 4th District had 91,815 voters registered as No Party Preference.

Following a Republican takeover of all three branches of government in 2016, the Democrats mobilized, and a string of 2018 Democratic special election upsets has already wound its way through Pennsylvania, Kentucky, Tennessee, Alabama, Wisconsin, Missouri, Kansas, and Oklahoma. Now the June 5 primaries are upon us, and the question is, will the Dems have what it takes to make the list in a district that has gone easily red in the last five elections.

California’s 4th Congressional District, which encompasses 12,000 square miles of the Sierra Nevada and its foothills — from Sequoia National Park to Lake Tahoe in a shape somewhat reminiscent of a redolent seahorse — holds a 14-point Republican voter registration advantage in favor of 10-year Republican Representative Tom McClintock.

The 4th district hasn’t voted blue since 1990, but CNN recently downgraded its rating of McClintock from a “safe” win to “likely,” and the LA Times listed District 4 as the number 10 on a list of the most competitive California House races. Now, “likely” is a far cry from an even race, but three democratic challengers — Jessica Morse, Regina Bateson, and Roza Calderon — have gained noticeable traction over the last year.

“What really matters is results,” Bateson said. “I think the people have woken up. They’ve taken a long hard look around [and] come to the conclusion that we can’t keep going in the same direction. This year, everything is different. “

One difference is funding. In 2016 McClintock outraised Democratic challenger Bob Derlet 10 to one before winning by more than a 20 point margin. This year, the leading Democratic candidates have between them raised over $600,000 more than McClintock. Morse herself has raised $965,027 in campaign funds and has more cash on hand than McClintock, Bateson has raised almost $587,726, and while Calderon says she has purposefully run a campaign less focused on fundraising, she has almost twice the social media following of the other two.

There is a catch to three powerful candidates, however. California employs a primary system in which only the top two candidates move on to the general election, regardless of party affiliation. Since this “jungle primary” system became law in 2010, there have been numerous one-party races to emerge come the general election. Most of these instances have resulted in all blue Democratic races, but the 4th District leans heavily red and the potential for the Democrats to split the vote is a real possibility. Mitchell White, a relative newcomer to the race with less than $10,000 in his campaign fund and the only other Republican besides McClintock, is banking on it.

“It’s an interesting race where there’s three Democrats who are very strong, and they’re actually going to split the 40 percent of Democrats very well,” White hypothesized. “It actually leaves me with a chance to sneak by with a second place victory.”

Tom McClintock did not reply to multiple requests for comment.

Of the 434,381 registered voters in the 4th District, 187,493 registered as Republican, 126,238 as Democrat, and 17,505 as Independent or other. This means that if the three leading Democrats hypothetically split the Democratic vote evenly, White would only need to bring in more than 22.4 percent of the Republican vote to advance to the general election (not including the independent vote). A fourth Democrat, Robert Lawton, also threw his hat in the ring just before the filing deadline of March 9, potentially further diluting the ticket.

This was something the Democrats seemed all too aware of, right up until Jessica Morse received the California Democratic Party endorsement.

In January, candidate Regina Bateson had emailed the Tahoe Truckee Democratic Club stating, “If someone else gets endorsed, I will not continue to run as an ‘unendorsed Democrat,’ because I think that would be counterproductive and jeopardize the end goal of beating McClintock.”

Following the endorsement, however, Bateson did not leave the race on the grounds that she believed the endorsement had come too early and ignored the grassroots sentiments of the voters. Bateson did not reply to a request for comment on this topic. Now the race on the Democratic side is fiercer than ever, and a lawsuit by Bateson against the California Secretary of State led to Morse having to remove her designation as a “National Security Fellow” from the ballot, and her occupation slot will remain blank.

Morse had been criticized earlier in the race for overstating her experience as a national security strategist, but since those allegations both her former supervisor in PACOM, and former national deputy security advisor Ben Rhodes have penned letters and articles backing up her claims. Morse’s campaign told Moonshine Ink that, “Morse is proud of her years of service in national security, working on behalf of our country at home and abroad, including Iraq.”

Mail-in ballots dropped on May 7, and Tahoe Truckee Democratic Club co-chair Paco Lindsay believes a vote split is a possibility, but he has a guarded optimism about the Democrats aligning behind a single candidate. “A lot of people have figured, ‘Hey we have to have a candidate; we have to back somebody,’” Lindsay said.

Editor’s note: Lindsay and the Tahoe Truckee Democratic Club have endorsed Morse and Lindsay volunteers for her campaign.