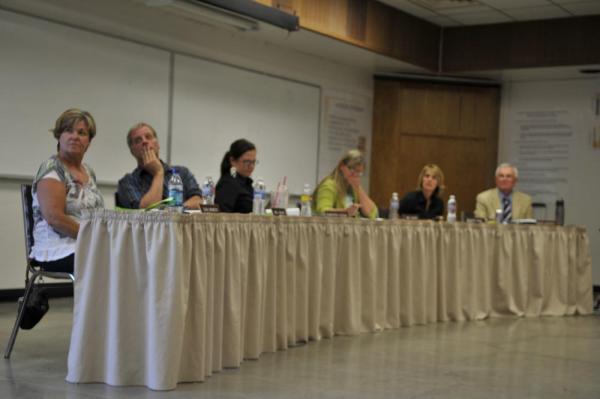 With lawmakers in Sacramento still dragging their feet on a state budget, officials with the Tahoe Truckee Unified School District went into their July 22 budget meeting wearing blinders. No one knew exactly how decisions made on high might trickle down to effect them, but the whole lot looked uncomfortable about the possible prospects.

‘(There are) still plenty of questions, we’re not going to have all the answers tonight,’ Assistant Superintendent, Financial Services, Steve Dickinson told the TTUSD Board of Trustees. ‘Guaranteed the numbers are gonna change, but that can’t stop us from moving ahead.’

Dickinson, backed by a wall full of charts and graphs, was predicting the District would need to shed another $2.5 million to $3.8 million. With California hemorrhaging a nearly $30 billion budget deficit, Sacramento was searching for further cuts and basic aid school districts – those that receive much of their money from local property taxes, and had thus been somewhat spared in previous slash-sessions – were now on the table.

Throughout this past year, in an often painful display, almost $4 million was cut from the District’s budget. The possibility of doubling that seemed to sour everyone’s mood.

‘It is an extremely complicated and frustrating thing to get our hands around,’ Dickinson said. ‘The thing to understand is that it’s real and it’s happening.’

A week later, with a final budget from the state, the District is still not sure exactly how big of a pill it will have to swallow.
‘I’d have to say it’s getting a little bit clearer but we don’t have all the information yet,’ said TTUSD Superintendent Steve Jennings.

Though he said it would take some time to figure out the damage, Jennings ballparked the District’s additional losses to be in the $3 million neighborhood – ‘it’ll probably be right in there.’

That’s pretty much the scenario discussed a week earlier at the in-the-dark budget meeting.

Three pools from which to draw that $3 million were identified at the meeting: further reducing District expenses, dipping into reserves and cutting employee costs.

Beyond the reserves and getting its employees back to the negotiating table, there were hints some sacred cows – such as athletics and administration – would be dragged onto the altar.

‘Some of these we really haven’t talked too much about,’ Dickinson said. ‘I know we don’t want to.’

There was also some discussion about how far the District could go in trimming the budget before services suffered too much.

‘The budget is not a goal, it’s a constraint that we’re under,’ Bill Kraus told his fellow board members. ‘At the end of the day we have to provide the best education possible.’