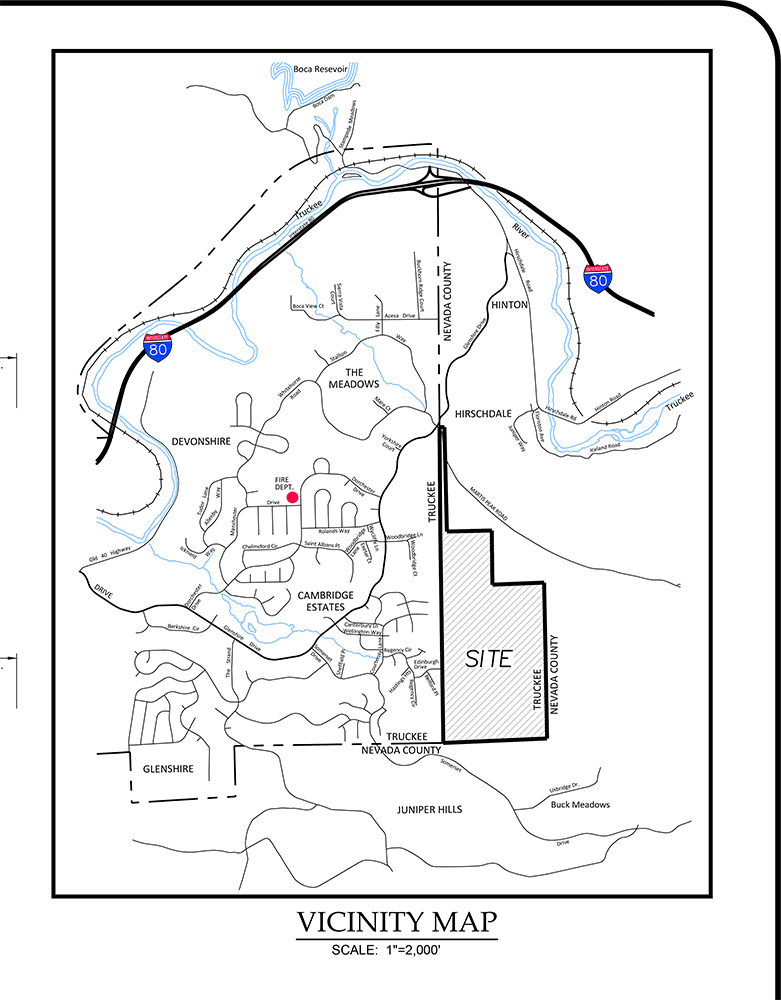 Editors’ Note, Nov. 30, 2015: The Dec. 1 continuation of the Canyon Springs planning commission hearing has been canceled, as the developer has requested additional time to submit a modified project proposal. A date has not been determined for a future hearing, but it is anticipated to be held in January 2016.

Canyon Springs, unquestionably the most controversial development project in the Town of Truckee’s 22 year history, will be decided on mid-November by the town’s planning commission. However, the project’s fate will likely be decided on by a judge, as both the developer and the opposition have said they will appeal and litigate, if their side is unsuccessful.

Canyon Springs Joint Venture, the developers behind the project, have proposed 177 single family units and 26 affordable housing units on 290 acres of land east of Glenshire, just on the edge of Truckee’s town boundary. The project also calls for 182 acres of open space and 4 miles of public trails. While the developer is touting the creation of open space and jobs, opponents cite numerous concerns, including deer herd disturbances, traffic congestion, and creation of sprawl.

“There has been an unprecedented level of public interest and controversy,” Truckee Town Manager Tony Lashrook said of Canyon Springs. “Development applications on the property date back to before Truckee was a town.”

At least four iterations of a project have been proposed on the 290 acres since 1990, all of which have been vehemently opposed by neighbors and environmental groups. The current Canyon Springs project was proposed in 2010, with the draft environmental impact report released in Dec. 2012, a revised EIR released in Sept. 2014, and the final EIR on Oct. 28. Truckee Planning Manager Denyelle Nishimori said the developer spent roughly $600,000 on the environmental impact report process, which she says is the town’s most expensive EIR to date.

Nishimori also noted that the town has received more public comments on this project than any other in the town’s history — 77 on the draft EIR and 75 on the final EIR — mostly opposing the development. It is this reason that the project will trigger another first for the town — a two-day public hearing, instead of the typical one-day hearing. Nishimori said she is expecting four to five hours of public comment on Nov. 16. The planning commission will then be asked to vote Nov. 17 on the tentative map and certification of the final environmental impact report, but could defer a vote to a future meeting.

“Now is the time to be involved,” Lashbrook said, as this meeting will determine what happens with the project.

However, if one side does not agree with the planning commission’s decision, the vote could be repealed to the town council. And if the repealed decision is not acceptable to either side, then litigation could occur. Chip Huck, an owner of the property, along with the Curtis Family Trust, told Moonshine Ink that he would “remain willing to legally defend the project.” Opponents have also made their voice loud and clear.

“If this project is approved, we will appeal and litigate,” said Alexis Ollar, executive director of Mountain Area Preservation, which sued over Old Greenwood in 2006. “This type of development is inconsistent with the town’s general plan.”

A main area of contention is the migration route of the Loyalton deer herd, which travels through the proposed site. While the final EIR does conclude that Canyon Springs will not create any significant environmental impacts and all potential impacts are less-than-significant, the California Department of Fish and Wildlife disagrees.
“As a trustee for California’s fish and wildlife resources, CDFW has repeatedly expressed concern for what we believe are significant impacts to the Verdi sub-unit of the Loyalton-Truckee deer herd,” wrote Shaundra Cashdollar of the California Department of Fish and Wildlife in a Nov. 6 public comment letter. “CDFW maintains that significant impacts from this project will occur in the forms of direct fawning and foraging habitat loss, migration corridor interruption, reduced habitat connectivity and fragmentation, increased disturbance and edge effects, direct mortality from vehicles, and effects to deer energetics with both short and long-term consequences.”

Lashbrook said the developer did multiple records requests from the agency to receive data on the herd, but that the experts the town used for the EIR disagree with the California Department of Fish and Wildlife.

“We just fundamentally disagree on that,” Nishimori said.

While MAP and SOS Glenshire, a neighborhood group opposed to the project, believe the EIR is flawed, the developer has a different view.

“We believe deer and wildlife are an important part of Truckee and experiencing the outdoors, and we designed and revised the project to minimize impacts,” Huck said. “The expert analysis incorporated into the document concluded that any potentially significant impacts can be mitigated to a less-than-significant level, and we agree with this conclusion.”

In addition to the deer herd, opponents cite several other concerns with the project, including increased traffic on Edinburgh Dr., hydrology and water quality issues, wildfire concerns, greenhouse gas emissions, and future growth.

“We are perplexed and concerned about Canyon Springs development and the final environmental impact report,” Alison Pedley, executive director of the Truckee Trails Foundation, wrote in a Nov. 9 letter to the town. “We have commented already about the poorly built existing trails that are either too steep and/or causing erosion. The plan continues to state a preference to use these poorly-built (some inaccessible) trails as part of the highly touted 5.5 miles of trails. Even more perplexing is the inclusion of these dirt trails and bicycle connectivity as mitigation for the increase in greenhouse gas emissions.”

Another main criticism by opponents is the way the project has been handled by the town and the developer. MAP contends there has not been community engagement on the project, and that the town has not been forthcoming with information regarding Canyon Springs.

One example given was that project signs were not placed on the proposed site informing residents of the project, as are in other areas around town. Nishimori said it was a “technicality,” as that requirement was made after the Canyon Springs development was proposed. She said she reached out to the developer asking if he would put up signs and he declined. When asked, Huck told Moonshine Ink that he was out of town at the time of the request dealing with a family emergency.

Both MAP and SOS Glenshire said they met with Huck early in the process to come to a consensus or to make an offer on the property so it is preserved as open space, but said he was uncooperative. Ollar said the developer was not willing to change the project or to work with the group. However, Huck said he “sought out and utilized public input for the initial design and subsequent revisions to address community concerns and improve the project.” He said he was also willing to entertain offers for the property, but would not say how much.

Now, with the public hearing looming, both sides are gearing up for a fight. SOS Glenshire Board President Leigh Golden said he has been following projects on the property for 14 years, and is not wavering in his opposition.

Said Golden: “I will not give up until there is a resolution.”