Home Columns In the Past Truckee/Tahoe Driving Rules

1. There obviously are NO Truckee/Tahoe Driving Rules. Look around and WATCH OUT!

3. Did you see the front-wheel drive Honda with the chains on the rear wheels?

4. U-turns are not allowed but should be expected in all areas.

6.  STOP signs are advisory only.

7.  A boat on Donner Lake was cutting through traffic, and nearly hit a downed water-skier. When stopped, he said, “But I’m just going over there!”

8.  Fifty-plus years ago last June I moved to the mountains, and the local garage/ambulance guy [50 years ago!] who’d been here since just after World War II sat me down and said, “Watch out for summer people — they sometimes pack so fast they forget their brains.”

In September, he asked me, “Remember what I told you in June?”

I responded, “Yes, and thanks — you were right!”

10. “That woman better watch out — that guy is turning out of the wrong lane into her … oh, no problem, she’s on her cell phone …”

11.  Standard response when stopped by a CHP officer: “But I’m on vacation!”

12.  When stopped for driving 50 miles per hour on Donner Pass Road during a white-out, the driver responded, “It’s so dangerous out here I need to hurry and get to my cabin where it’s safe!”

13.  Roundabouts are primarily for training purposes, and to provide work for body shops.

14.  Locals stop for all pedestrians crossing roads indiscriminately; they might not have spent all their money yet.

15.  The three-way stop at the Bar of America/Truckee Hotel corner exists because trains will not and cannot stop in less than a mile … FAIR WARNING!

16.  My grandfather made me learn this poem before
I could ride my bicycle on Kansas county roads (I was 3 years old):

“Here lies the body of Johnny Jay,
Who died maintaining his Right-of-Way.
He was right, dead right, as he sped along,
But he’s just as dead as if he’d been wrong!”

17.  A local guy who grew up here, and who has lived in Reno for 15 years points out: “Reno driving is worse!”

MORAL OF THE STORY: Slow down and leave lots of room!

~ Nelson Van Gundy has survived driving in Truckee/Tahoe for over 40 years.

And No Parking on the Street!

The Moonshine Ink crew would like to remind EVERYONE that there is no roadside parking from Nov. 1 to April 1 throughout many areas of the Truckee/Tahoe region. Not only might your car block traffic or homeowner access, it also can interfere with vital snow removal services that may be ongoing after a storm has passed. Plus, you could be cited or even have your vehicle towed.

The California Highway Patrol – Truckee, who graciously provided the photos on these pages, also told us that dealing with parking in the area has been taking an inordinate amount of time for the limited staff. While CHP understands the desire to get out into the backcountry right now, they ask that we all make sure to park legally.

The local division covers a large area, from Kingvale off Interstate 80 to the Nevada state line, all the way down to Tahoma and over to Kings Beach. Often, a limited number of officers are on duty to patrol the entire zone. Dealing with calls about illegally parked cars keeps the agency from performing other key duties. Please chip in to ensure only safe and legal parking is occurring — be part of the solution, not the problem.

Share this info with friends, family, and strangers. Together, we Keep Tahoe Smart! 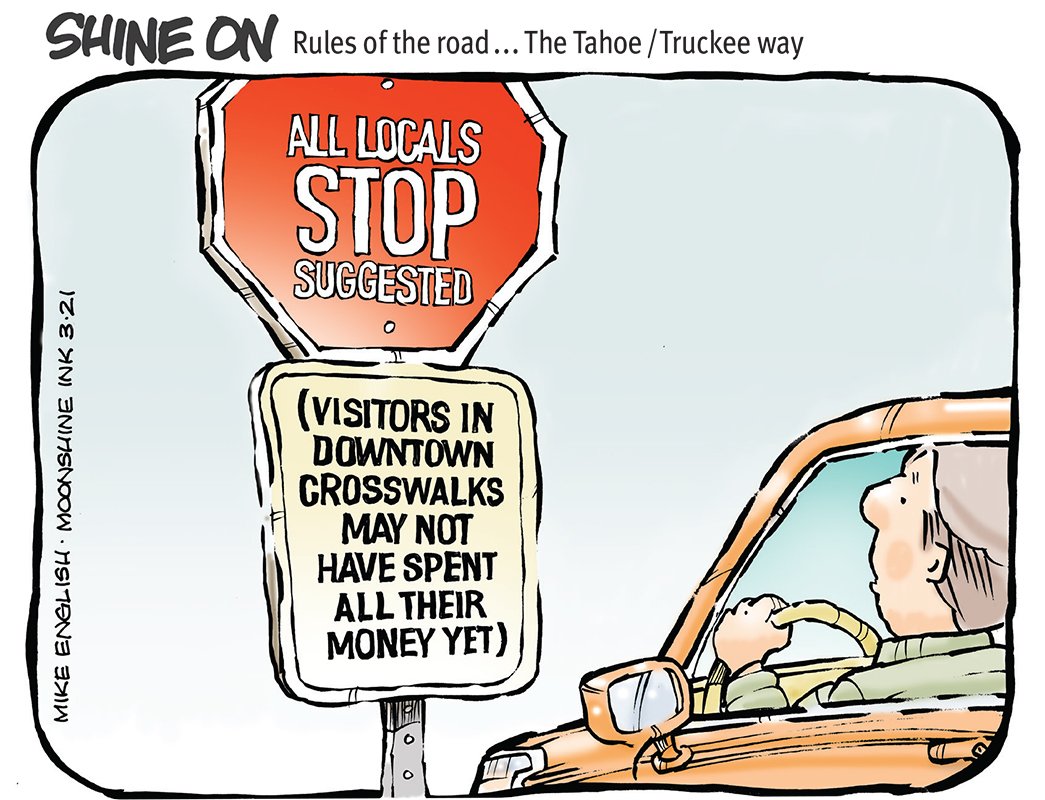