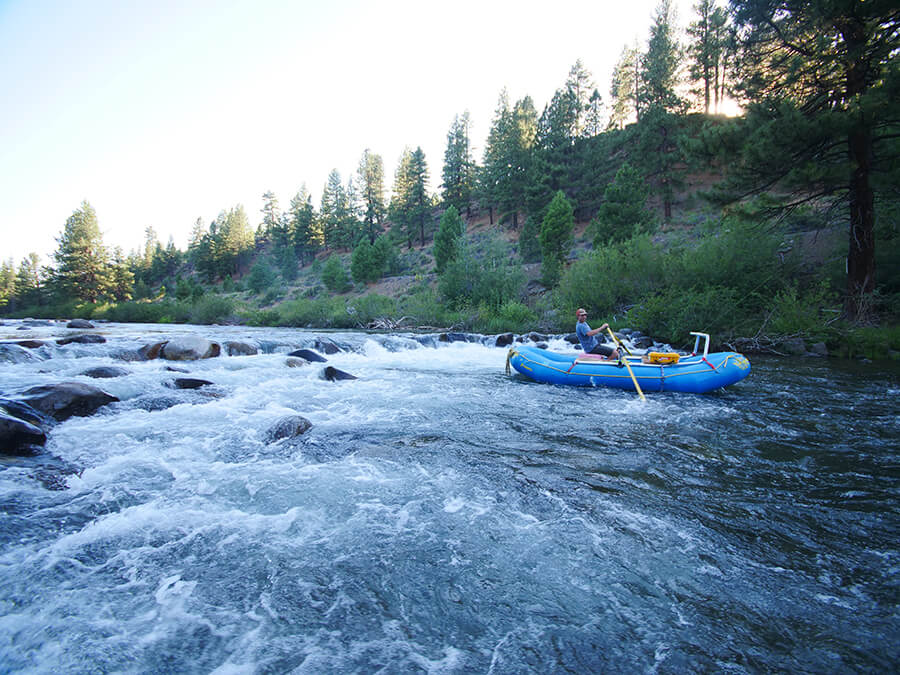 I’ve noticed the San Francisco Fly Casters Club has been moving rocks around to create multiple ledge drops on their private stretch of the Truckee River, and making it very difficult to float that stretch. Why are they doing this and is it legal?

That stretch is the site of a Trout Unlimited (TU) project completed in two phases during October of 2016 and 2017. TU approached the San Francisco Fly Casting Club in 2015 and requested permission and funding to undertake a pilot project to enhance trout habitat inside their property boundaries on the Truckee River. This partnership and project concept was in response to the historic California drought, the Truckee River total maximum daily load, and extremely poor habitat conditions for trout. Fish habitat features were constructed to 1) enhance fish habitat, 2) reduce streambank erosion, 3) facilitate sediment transport, 4) improve dissolved oxygen, 5) reduce water temperature, 6) improve recreational boating, 7) maintain river stability, 8) improve aquatic insect habitat, 9) withstand large floods, 10) maintain channel capacity, 11) be compatible with natural channel design, and 12) be visually acceptable to the public. The project was permitted by regulatory agencies, and the designs conform to designs commonly used on river restoration projects in California and other states. No material was excavated from the channel during the project. Instead, existing rocks were reorganized to meet the multiple objectives stated above.

In response to the issue of recreational boating, TU completed pre- and post-project evaluation of floating access in anticipation that this would be an important public issue. Historic, average base flow through the project area is 216 cubic feet per second (cfs) during early October according to Balance Hydrologics. TU found that recreational floating in a standard 14-foot raft cannot be negotiated through this section of the Truckee River at base flow without getting consistently stuck on existing rocks and riffle crests. We evaluated a minimum pre-project floating flow between 300 to 350 cfs by testing the float in a 14-foot raft with only minor hang-ups. We found that post-project floating results improved at this flow rate, because the new fish habitat structures consolidated historically shallow, flat areas of the river into velocity tongues that are easier to float over.

The fish and aquatic insects are thriving in response to the project, and it was TU’s hope that this project would be a catalyst for other river improvements and revitalization work on public lands in coming years. That has proven to be the case. TU is sponsoring a similar project with the California Department of Fish and Wildlife in 2018 on the Truckee River State Wildlife Area, located 2 miles downstream of the project completed on the club property.

Have any music events been held, or are there any being planned, for the Sand Harbor amphitheater on Lake Tahoe’s East Shore? I love and support Shakespeare, but would that not be one of the coolest music venues in California, or is there a firm reason this won’t happen?

The stage is owned and operated by the Lake Tahoe Shakespeare Festival. If someone wanted to do a concert, it would be up to the festival to approve or deny any requests.

Just a side note: The Shakespeare stage is located within the Lake Tahoe Nevada State Park, so it would not be one of the “coolest music venues in California” as your reader mentioned, but we do agree … it is one of the coolest stages in Nevada.